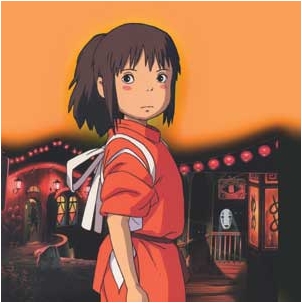 With a little help from a rotund forest spirit, a teen-age witch and the odd flying pig, Hayao Miyazaki has spent a lifetime redefining animation and the possibilities of cinema for children. But after his 1997 eco-fable Princess Mononoke smashed box-office records in Japan, he indicated that perhaps it was time to step aside.

“I wanted to retire,” Miyazaki, 62, explained to Roger Ebert. “I opened all the drawers in my head; they were all empty. So I realized I had to make a movie just for 10-year-olds, and Spirited Away is my answer.”

That this ostensibly kids-only picture went on to top Mononoke and become Japan’s biggest blockbuster in history may suggest that Miyazaki was being unduly modest with Ebert—or, perhaps, that General MacArthur wasn’t so far off the mark when he infamously described the country he occupied as a “nation of 12-year-olds.” Certainly, a variation of this patronizing attitude—a belief that American adults are too sophisticated to watch “just a cartoon”—has kept Miyazaki’s luminous art relatively obscure on this side of the Pacific.

But here, the problem is not just that animation is considered the exclusive domain of kids. The problem, more precisely, is that animation is dismissed because of its association with children. In this way, we dismiss not just an art form but the intellectual needs of children as well. Not surprisingly, the average Hollywood kidflick is a dreary studio exercise in cross-promotional synergy.

Spirited Away, on the contrary, is proof of the great cinema that is possible when somebody takes the wild mind of a 10-year-old seriously. For on one level, the film really is intended just for children: It lacks the unified simplicity of earlier Miyazaki classics like My Neighbor Totoro or Kiki’s Delivery Service, which a grown-up, literary sensibility can easily appreciate. In Spirited Away, the sheer density of fantastic imagery—all of it meticulously hand-drawn—can be both breathtaking and baffling to the over-12 set. The most bizarrely untethered creation of Miyazaki’s career, the story of young Chihiro’s picaresque journey through a supernatural underworld very quickly spins beyond the point of no return.

After tumbling down the rabbit hole, you’re pretty much on your own to make heads or tails of the principal setting, a bathhouse whose clients include a massively polluted river-deity and an enormous “radish spirit.” The bathhouse is run with an iron fist by one Yubaba, a mean old witch (who nonetheless does have her good points). That Chihiro becomes a kind of indentured servant in this place thanks to her profligate parents—Yubaba turns them into pigs after they noisily and grotesquely devour some food left out for the gods—is a detail surely not lost on the film’s Japanese audiences, who for a decade have lived with the economic consequences of an earlier generation’s extravagance. The spirit world teems with the lost souls of capitalism, harrowingly glimpsed at dusk as Chihiro frantically searches for her parents. (Banned from the bathhouse, these “No-Face” gluttons are unable to responsibly handle such luxury.)

The malevolence of the spirit world’s reaction to Chihiro is a far cry from the gentler, agrarian world of My Neighbor Totoro (1988), where the titular forest spirit amiably grunts and gestures his acceptance of the human children who seek his help. But in Miyazaki’s quasi-animist universe, flora and fauna aren’t jauntily anthropomorphized à la Disney, they simply are, and humans must coexist with them. This is not always a Totoro-like warm and fuzzy proposition: In Princess Mononoke, where people have done some very awful things, it means contending with the wrathful denizens of the endangered Forest of the Deer God. In Spirited Away, there are consequences for dumping trash into rivers—or filling them in outright to service urban sprawl.

Both Mononoke and Spirited Away can be at times disturbing—but so too is the episodic terror of the original Alice in Wonderland, from which Alice nonetheless emerges a more enlightened young woman. What makes Miyazaki’s movies great, and so eminently suitable for children, is the manner in which these films arrive at their endings, which are indeed quite happy. In Princess Mononoke, the humans’ iron foundry may be rapaciously destructive to the forest, but Lady Eboshi—its fiercely feminist leader—employs women, lepers and other castoffs accorded no other place in medieval Japanese society. The villainy is not so cut and dry. It falls on an indigenous human prince—whose people are as endangered as the forest—to find a way to draw the two sides into constructive and meaningful cooperation. In Spirited Away, Chihiro likewise learns to recognize the legitimate claims of competing interests, which directly helps her own quest to save her parents from porcine oblivion.

There is a mature morality on colorful and humor-filled display here, one that stands in pointed contrast to the childish fantasies of tit-for-tat vengeance at the heart of too much cinema—and political discourse—pitched to adults and children alike. In the present climate, America would be well served by a wide distribution of Porco Rosso (1992), a Miyazaki gem rarely seen over here. A fond homage to the roughneck culture of early aviation, the film is also, along the way, a gently rigorous parable of creeping authoritarianism.

The eponymous hero, a flying-ace mercenary pig, patrols the Italian Mediterranean between the world wars. When one of his old human chums from the Air Force tries to convince him to rejoin the military, Porco snorts, “Better a pig than a fascist.” Thuggish air pirates, led by an opportunistic Hollywood actor, join up with the Blackshirts, and Porco becomes an enemy of the state. Like much of Miyazaki’s work, you cannot quite believe you’re watching an animated children’s picture.

The good news is that we might actually soon get a fair chance to see Porco Rosso and other movies from the formidable canon of Studio Ghibli, the animation house Miyazaki cofounded in 1985 with fellow director Isao Takahata. This is because Spirited Away appears to be a Ghibli first: something of a bona fide theatrical hit in America, steadily but remarkably accumulating a following in its second month of a modest stateside release. Disney, stung by the flop of its poorly dubbed version of Princess Mononoke, cautiously floated Spirited Away to 26 theaters in September. Now that number is up to 151, and the film is gamely holding its own on a crowded playing field. (Red Dragon, for example, hogged 3,363 screens on its opening weekend.)

Undoubtedly, this momentum has a lot to do with Pixar’s John Lasseter, a longtime Studio Ghibli devotee, who handled the film for Disney and treated it with uncommon reverence from the beginning, supervising an excellent English dub that puts to shame the Miramax-conceived maiming of Mononoke. Disney, much to its credit, has even taken the unprecedented step of also distributing Spirited Away in English-subtitled Japanese prints, for those who prefer to view the original.