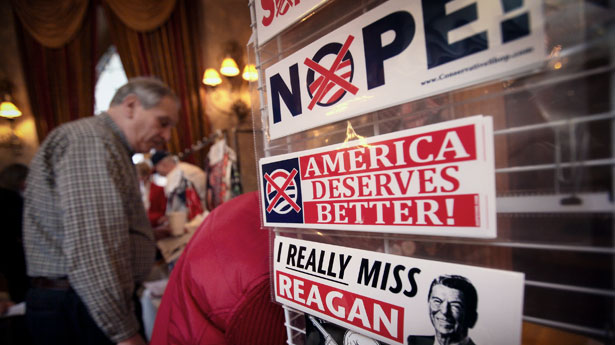 Are America’s long-running culture wars drawing to a close?

The hardline fiscal flank of the Reagan Alliance has drifted into the orbit of the grassroots Right, courtesy of the Tea Party uprising.

During this primary season, reporters and commentators, wandering along the profoundly contrived and artificial campaign trail, have succumbed to a kind of Stockholm Syndrome. They have taken to scrying the mystical abilities of this or that individual candidate to “connect” with voters and be “authentic.” Our press corps must somehow compensate for the degradation of covering a modern political campaign by insisting that such an unsightly ritual possesses some – any – kind of interior meaning.

Yet the real story of this political season has less to do with the minutiae of stump-driven self-presentation than with structural shifts on the national conservative scene. We are not so much witnessing Mitt Romney’s bathetic managerial failure to engage the average voter – or Rick Santorum’s questionable suitability for the political prime time – as we’re observing the real-time decomposition of the once-invincible Reagan coalition. For all of Romney’s shortcomings as a people person – and Santorum’s limitations as an extremist moral scold – the question isn’t so much whether candidates can connect, but what institutional forces on the American Right are still out there to connect with.

The most instructive illustration of this dilemma is the great dog that won’t bark in this Republican cycle: the culture-war gambit. The hound isn’t staying silent due to any insufficient supply of red meat – we’ve seen successive efforts to gin up righteous fury in the culture trenches of the Right on issues such as the Human Papillomavirus (courtesy of that now all-but-forgotten Tea Party Maximum Leader Michele Bachmann) and immigration (courtesy of, well, everyone else in the field who opportunistically pounced on debate responses from Newt Gingrich and Rick Perry indicating that all illegal immigrants need not be reviled as job-stealing lawbreakers). Hell, even libertarian poster boy Ron Paul blanketed Iowa with gruesome ads dramatizing his deep spiritual opposition to abortion rights.

None of these symbolic cultural feints worked – the needle on the great Kulturkampfs that have defined grassroots conservative politics for the past four decades remains completely flat. Indeed, when Santorum emerged finally as the last not-Romney candidate left standing, the career culture warrior promptly blew his advantage by doubling down on culture-war themes in Michigan, deriding Obama as a “snob” for supporting universal college education, and denouncing JFK’s past pronouncements on the separation of church and state as something that made him “throw up.” As a result of the latter tirade, Romney handily won Michigan’s big GOP Catholic vote, even though Santorum is an ardent Catholic, and there is no love lost between Mormons and Catholics, generally speaking.

Much the same dynamic holds in the other great ideological conflict in the GOP: the (rapidly waning) influence of Tea Party purism, versus the (strikingly anemic) clout of the big-money party leaders in Washington and the business elite. The original social contract behind the Reagan Coalition – enlisting the culture infantry of the Christian Right under the unlikely generalship of the GOP’s traditional tax-obsessed business establishment – was always an unstable thing, largely kept in place by the hostilities that both political blocs had harbored for godless communism. Now, however, the hardline fiscal flank of that alliance has drifted into the orbit of the grassroots Right, courtesy of the great Tea Party uprising.

The fashionable pundit view of the embattled Romney candidacy is that Romney is the Republican version of the 2004 Democratic nominee, John Kerry – a candidate that no one in the party actually seems to like, but who seems well suited to defy a hated, well-fortified opposition president largely on the strength of his resumé entries. But when you look at the ravening forces that the eventual Republican nominee will have to somehow marshal into a unified front come November, this election cycle seems far more likely to harken back another 40 years, to the Great Libertarian Passion of Barry Goldwater – another personal debacle that concealed far deeper institutional shifts afoot on the American Right.