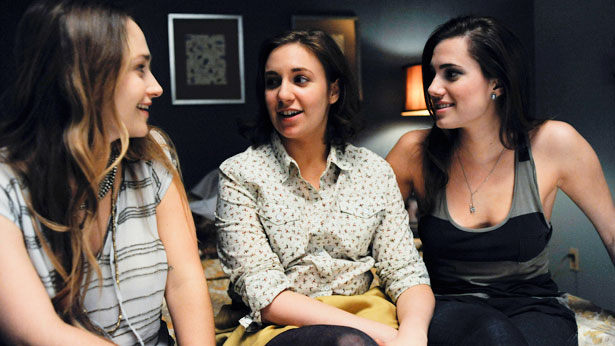 The only thing interesting about Girls is that it clarifies how much of American pop culture teems with similar regression-lite themes.

The HBO comedy Girls has been hailed as the feminist answer to Judd Apatow’s Hollywood bromance franchise. And like Apatow’s Knocked Up, The 40-Year-Old Virgin and Superbad, Girls is a labored, extensive study in arrested development, as experienced by characters rendered as fleeting glyphs of self-knowing social privilege. Apatow has executive-produced Girls for HBO, and boy, is it easy to see why.

As in Apatow-land, the characters who undergo the rote plot reversals and drugged-out hijinks in Girls – call it regression lite – either hail from upper-middle-class comfort or mysteriously sustain themselves on some magical combination of pluck and attitude.

The show’s creator and writer, Lena Dunham, also plays the lead protagonist, Hannah. After Hannah learns that her two college-prof parents will no longer subsidize her bohemian life and she loses an unpaid internship at a literary magazine, a crisis ensues. So naturally, she adjourns to the apartment of her actor-boyfriend – who fancifully subsists on an $800-a-month stipend from his grandmother and the aforementioned pluck – for vaguely self-hating rough sex. When she worries that she possesses none of the talents that one is supposed to tout in one’s résumé, the indifferent swain announces that it’s been so long since he’s looked for a job that he can’t remember what you’re supposed to include in a résumé.

As the kids say: Whatever. Through Girls’ turgid intrigues, interchangeably wan characters wander from jobs, boyfriends and glamorous travel destinations, marveling at the world’s failure to conform to their desires. Not that they have much grasp on what those desires are: Hannah is working, desultorily, on a memoir – with the baroque Dave Eggers-style self-knowing disclaimers that go with such a twentysomething conceit. And in a chemically fueled display of still more pluck, she brandishes the work in progress before her parents and demands a year-long stipend from them to complete the manuscript.

The only thing interesting about Girls is that it clarifies how much of American pop culture teems with similar regression-lite themes. The HBO comedy Veep sets up a phalanx of middle-school style vituperation within the fictional vice presidency of Selina Meyer (Julia Louis-Dreyfus). Dreyfus’ Selina is a (notionally) grown-up and successful version of Dunham’s Hannah, fretting over recondite slights to lobbyists and how well she’s trending on Twitter, all pretty much in a vacuum of actual, you know, political ideas or meaningful conflict. Armando Iannucci, who directed the 2009 black comedy satirizing the run-up to the Iraq War, In the Loop, has clearly calculated that the scabrous Machiavellian conflicts that drove that more successful project won’t fly for an American audience.

And why shouldn’t he? From the antics of the emotionally stunted ad men of Mad Men to the faux-whimsical child worship on display in Extremely Loud and Incredibly Close, tragedies are hewn from the wrenching compromises and cruelly delayed gratification that attend the onset of adult responsibility.

Ironically, the one pop culture fable that bears witness to traditional adult virtues – an appreciation for the rigors of manual work, a distrust of easy fame and celebrity and a demanding ethic of care for other, weaker souls – is aimed squarely at teens. Suzanne Collins’ The Hunger Games, adapted into a blockbuster movie franchise, depicts the world of adult social power as an unrelieved dystopia, rendering virtually every adult character as foolish, ruthless and/or infantile. The novel’s protagonist, the omnicompetent teen warrior Katniss Everdeen, reflects thusly on her clinging, ineffectual mother: “Some small gnarled place inside of me hated her for her weakness, for her neglect.” And when one of her adult handlers guesses at her contempt, she thinks: “He’s right… The whole rotten lot of them is despicable.”

During the industrial-age heyday of the Victorian novel, a character like Katniss would be a figure of pathos – a child forced to grow up prematurely and provide for her hard-pressed family. But in our own terminally regressed pop cultural landscape, she’s nothing less than a superhero. Small wonder that she goes on to become a revolutionary.