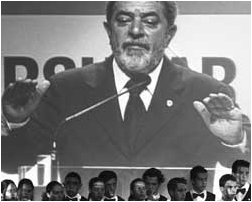 Lula speaking at the opening ceremony of a sugar-exporting terminal.

BY Kevin Y. Kim
Share TweetReddit0 EmailPrint
Two thousand miles north of that bustling hub of Brazilian business, São Paulo, lies a dusty hamlet of 26,000 peasants. Nestled in the country’s drought-prone northeast, an area said to contain Latin America’s largest concentration of rural poverty, Caetés is a town where nearly everyone is—or claims to be—related to Brazil’s new president, widely hailed as globalization’s greatest hope in decades. Here, where less than a fifth of the population has clean tap water, Luiz Inácio “Lula” da Silva was born amid yucca farmers and mothers struggling to send their children to bed with enough rice in their bellies to sleep peacefully.

Published on the one-year anniversary of Brazil’s first working-class president’s tenure, Lula and the Workers Party in Brazil isn’t blind to the unchanged poverty in Caetés and thousands of villages like it. While refraining from castigating Lula for betraying his early radicalism, the authors, veteran BBC and Guardian correspondents Sue Branford and Bernardo Kucinski, qualify the oft-recited claim that Lula could help construct “a real alternative to neo-liberalism” with the question on every progressive’s mind: Can the Workers’ Party (PT) government still achieve this, or has its reinvention as a moderate party to win the presidency compromised its difficult destiny?

The answer Lula posits is that it’s too early to tell. It’s not a good sign that after one year Lula’s happiest constituents are the international financiers whose dogmatic policies have mired Latin America’s economies since the 1980s. In 2003, Brazilian interest rates shot up, budgets got slashed, and inflation was forced down in what’s become a familiar IMF recipe for prompt foreign debt repayment and sluggish economic growth at home. Little wonder, then, that some PT rank-and-file began wondering aloud whether Lula had sold his soul to big capital.

But has he? Branford and Kucinski report Lula tossed and turned many sleepless nights before enacting the austerity program the IMF and foreign creditors demanded. His predecessor handed Lula a colossal public debt reminiscent of Latin America’s irresponsible governments of yore, who drew the IMF to the region in the first place. In the lead up to Lula’s October 2002 election, collapsing investor confidence and a rapidly spiraling real presaged a speculative attack on Brazil’s currency, threatening to cripple the PT government before it began.

Pragmatism ruled the start of Lula’s administration. The official rationale held that “initial austerity policies could always be changed later into expansionist ones.” Lula, whom Kucinski interviewed for the book, speaks of the decision in parable, a style endearing him to the millions of Brazilian poor:

We moved into a house that was in shambles. We have to put in a new roof and a new floor. We have to redecorate and then we have to adapt the house to our needs. This all takes time.

The time for grandstanding is over, Lula states. Instead, he tells Kucinksi,“it is the time for doing.” What emerges from Lula’s collage of biographical profiles, economic statistics and political analyses is the portrait of a leader who has given up left-wing rabble-rousing for consensus-building and gradual but steady reform.

While the PT’s radical minority feels its first pangs of disillusionment, so far Brazil’s people appear to be with Lula for the long haul. Polls show him still enjoying record levels of public support, with an approval rating hovering around 70 percent. Positive market indicators have bolstered his recent promises to convert 2003, “the year of tolerance,” into a “spectacle of growth” in 2004. And while constrained by foreign capital at home, Lula’s audacious initiatives abroad—especially his tough stands at last year’s Cancun and Miami trade talks—reveal his still-fiery commitment to making free trade fair and lifting social concerns to the top of the globalization agenda.

Time will tell whether Lula becomes master of the Clintonian fudge or the stalwart leader the developing world deserves. What his critics overlook is the way the PT’s transparent, accountable style of governance itself challenges Washington-led globalization. Where Lula ends—an account by Hilary Wainwright of stirring successes in Porto Alegre’s participatory self-government —globalization’s many actors might begin a long overdue search for alternative political models.

Liberal capitalism’s longevity “is rooted in a proclaimed respect for democracy,” Wainwright writes. “The problem is that democracy rarely puts capitalism to the test.” It’s high time the locals start teaching the internationals a thing or two about poverty, democracy and macroeconomic policies that make sense.

Kevin Y. Kim is a writer in New York. His work has appeared in The Nation, L.A. Weekly, Far Eastern Economic Review, and elsewhere.