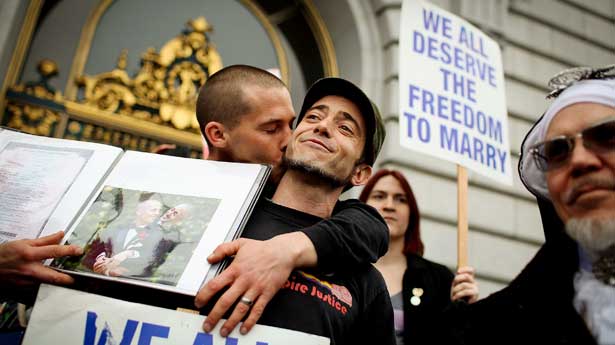 Is the LGBT movement walking down the aisle to nowhere?

"The gay marriage movement wants to pretend that marriage has somehow changed, but it also is invoking this very 1950s narrative that unmarried people are unworthy of respect."

As LGBT pride month rang in this June, the gay rights movement seemed to have much to celebrate. President Obama’s announcement of support for same-sex marriage, though denounced by some as a contrived political move, was followed by the overturn of part of the Defense of Marriage Act by a federal appeals court. But these apparent wins haven’t resolved a longstanding debate within the LGBT community: Is winning the right to marry really a victory? Many queer activists argue that the narrow focus on marriage has eclipsed other issues and tamed a once-radical movement. In These Times discussed the direction of LGBT organizing with Kenyon Farrow, former director of Queers for Economic Justice; Josh Friedes, director of marriage equality at Equal Rights Washington; and Yasmin Nair, a Chicago writer with the radical queer collective, Against Equality, who also organizes youth with Gender JUST.


Same-sex marriage is on the ballot in four states this November. What’s the outlook for these initiatives, especially in light of statements of support from President Obama and other leaders?


JOSH: The statements from these leaders are huge. They provide a pathway for many people to evolve their positions, and we’re seeing public support for equality increasing. I am extremely optimistic that 2012 will be the year where we see the first marriage equality ballot initiative move positively through an electorate.
YASMIN: This may be true, but the notion that marriage is some kind of magic button that, when you press it, makes things better for LGBT people, is a dangerous one because it can be untrue in so many instances. The assumption that marrying will extend healthcare to the family members of LGBT people ignores the fact that many of us cannot access healthcare in the first place. The people who are going to benefit the most from gay marriage will be the ones who already have the resources.
KENYON: And plenty of people are willing to support marriage equality who may not support any other aspect of a progressive agenda. The LGBT equality movement is moving further and further to the right, and now we’re developing relationships and even Super PACs with Republican donors who, for personal reasons, are willing to fundraise for marriage equality.

Part of this question is about the nature of marriage itself. Does it benefit LGBT people to gain entry to an institution that many consider heteronormative?


JOSH: If you look at the arc of history—whether it is anti-miscegenation laws or those restricting the rights of Jews to marry—marriage is often used as a way of making people “the other.” If LGBT people are going to be seen as fully equal, we need to overcome this.
KENYON: There’s also an equally long history of the state compelling people to marry. The argument in the ’90s, that what poor women really needed was to get married, provided cover for the state to abandon large parts of its welfare and food stamp programs. We’re also seeing that in states with same-sex marriage, companies are now dumping their domestic partnership benefits, which sometimes were not just for gay couples, but also for unmarried straight couples or family members. So there’s actually a way in which marriage becomes not a civil right, but a civil demand from the state in order to get benefits.
JOSH: Freedom to marry includes the freedom to reject marriage. But I don’t believe in this notion of heteronormativity. I believe that an incredible number of people choose to form a lifelong bond with another person and have that recognized. If marriage had remained a very unequal institution, LGBT people would be working for domestic partnerships or some other status. But marriage has become an increasingly egalitarian institution, and therefore has become more appealing to gay and lesbian people.
YASMIN: The idea that marriage has transformed from a profoundly unequal institution into an equal one is untrue. It has shifted a bit, perhaps: You’re not allowed to beat your wife and get away with it these days. But what has definitely not shifted is the state’s role in marriage, in using marriage as a pivot to take away benefits. What marriage does is persuade us that it’s our sole, private responsibility to take care of our families, and that only through a marriage contract will we be granted lifesaving benefits. If marriage is truly a choice, then the unmarried should be able to receive the same benefits as the married.

And that’s not just an anti-assimilationist argument; you’re also implicating the push for marriage equality in privatization and austerity.

KENYON: Yes, politicians are often given a pass on other issues when they come out for marriage equality. People all over the country laud Mayor Bloomberg for his support of same-sex marriage. But in his recent budget, there was a 70 percent cut in homeless youth services, as many as half of whom identify as LGBT. And many of the LGBT equality organizations, after praising these politicians, don’t show up to the budget hearings to defend these services.

Do we have to juxtapose marriage rights and economic justice? Could marriage equality be a pathway to winning other rights?

JOSH: I think attacks on marriage equality are a bit of red herring. You can look at the budget cuts in New York and blame it on marriage. But you can also look at states without marriage equality and see how much less there is for LGBT people. In Washington state, the political power that has built around the marriage issue has resulted in transgender hate-crime and anti-bullying statutes.
YASMIN:It is probably true that hate crimes legislation and anti-bullying laws in Washington are connected to gay marriage—but that is exactly the problem. Marriage solidifies the idea that the “inclusion” of LGBT people is the solution, and it has been accompanied by a push for inclusion in the military and in hate crimes and anti-bullying legislation. But this ignores the fundamental inequality perpetuated by these institutions—marriage, the military, the criminal justice system. Hate crimes and anti-bullying legislation are punitive measures that will drive the prison-industrial complex and the school-to-prison pipeline.


So how did the push for inclusion in these institutions become so central to today’s LGBT movement?


KENYON: The queer movement was once very much a part of the Left. But as the AIDS epidemic began to impact gay men irrespective of economic or social class, it drew a lot of conservative, wealthy, white gays into the movement, and there was a real debate amongst radical and more conservative segments. As a result, we saw the movement gravitate toward issues involving white folks’ understanding of citizenship: marriage, military service and, to some extent, hate-crime legislation. This is not to say that people of color haven’t fought for those things, but certainly not as ends in and of themselves. AIDS organizations, meanwhile, have lost enormous amounts of funding to marriage equality.
JOSH: I don’t think the emergence of the marriage equality movement has been the outgrowth of political analysis as much as it has been driven by the passion of human couples wishing to marry. There is, fundamentally, a stigma in not having the ability to choose or not choose marriage.
YASMIN: But the gay marriage movement can’t have it both ways, arguing on one hand that there is this tremendous stigma, but on the other hand that people can just choose whether or not to marry. The gay marriage movement wants to pretend that marriage has somehow changed, but it also is invoking this very 1950s narrative that unmarried people are unworthy of respect.

How do you see this split over the marriage issue impacting the future direction of LGBT organizing?

KENYON: The marriage equality movement has increased the identification of white gays and lesbians as members of the suburban middle class and, particularly in urban environments, we’re seeing growing conflict over gentrification and other issues with black and brown LGBT youth.
JOSH: But especially for LGBT people who are white or middle class, the battle for marriage equality has opened their eyes to other forms of oppression. Those of us who work on marriage equality must remind everyone that this is not the ultimate goal of the LGBT movement. But it is an essential ingredient—we need to build political power, not destroy it with a circular firing squad. And we absolutely need to talk about healthcare, but I think we do a disservice when we suggest marriage equality is only about healthcare.
YASMIN: It is worth remembering, though, that the AIDS movement once argued for universal healthcare, and that argument has now dropped out of the picture. Looking into the future, I see gay marriage furthering the neoliberal state. The great irony is, I may see marriage equality in the next 20 years in the United States, but I will likely never see universal healthcare in my lifetime.