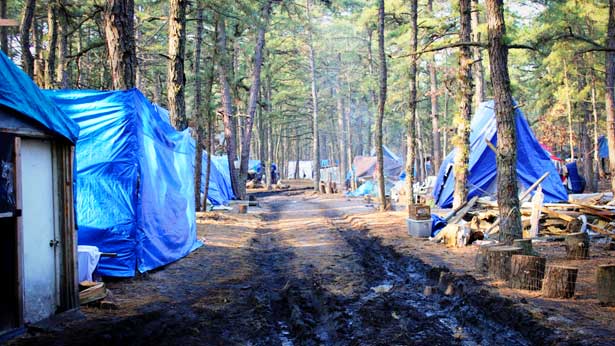 Tent City in Lakewood, N.J., is home to many.

Civil rights for homeless communities wane across the country.

On back-to-back days in June, the Rev. Steve Brigham was arrested at the tent city he runs in Lakewood, N.J. Charged with criminal mischief and witness tampering by Lakewood Township police, Brigham says the arrests are the latest incident in a “pattern of harassment” aimed at evicting the homeless encampment. As an estimated 640,000 Americans go without shelter each night, many cities are pursuing policies to push them further into the margins. But Brigham and other residents are fighting to stay where they are.

Last year the township sued in state court to close down the camp, but a judge ruled in February that, because its residents had no other options for housing (the closest shelter is more than an hour away), the tent city had to remain open. Brigham and several camp residents then filed a class action suit against Lakewood Township and Ocean County, accusing them of violating the state constitution’s guarantee of a “right to safety and to life.” Both suits remain active, and an effort to reach a negotiated solution is underway.

Meanwhile, the relationship between the township and the homeless camp has deteriorated. Brigham claims township officials have towed residents’ cars and dumped wood chips at the end of an emergency exit path. Township officials dispute this, saying they are only responding to problems at the camp.

The tent city, established by Brigham six years ago, is currently home to nearly 100 people, most of whom have already tried shelters, living with relatives and friends, or sleeping in cars. The camp is located a mile from the city’s small downtown.

The harassment facing the camp is consistent with a spate of municipal laws passed in recent years that criminalize what homeless advocates call “acts of living”—sleeping, eating or even sitting in public places. In May, Denver banned camping on public property. Philadelphia banned the feeding of the homeless in June. In San Francisco, according to the San Francisco Public Press, the city issued nearly 40,000 tickets to homeless individuals between 2007 and 2011, for offenses including sleeping in parks, trespassing and obstruction of sidewalks.

According to the National Law Center on Homelessness and Poverty (NLCHP), more than 50 cities have adopted anti-camping or anti-feeding laws. Eric Tars, director of human rights and children’s rights programs for NLCHP, said these laws do little more than sweep the problem of homelessness under the rug. “It is a clear violation [of human rights] to punish somebody for basic human activities—eating, sleeping, going to the bathroom even—if they don’t have any other place to do it,” Tars says.

A joint report from the U.S. Interagency Council on Homelessness and the U.S. Department of Justice, released in April, called on local governments to redirect funding for policing non-violent offenses toward collaboration between law enforcement and social service providers.

Some communities have begun fighting back. In June, a coalition of the homeless and their advocates in Rhode Island successfully pushed for passage of the nation’s first Homeless Bill of Rights, which designates an individual’s housing status as illegal grounds for discrimination and thereby guarantees the homeless the same rights and access to public spaces as everyone else.

The Seattle Housing and Resource Effort, a grassroots organization of the homeless, runs a network of self-managed shelters and tent cities across the greater Seattle area. By building bridges with supporters in the community and pressuring public officials to remove legal barriers to tent cities, the group has established two encampments that each sleep up to 100 people every night and provide bus tickets for residents to get to and from work.

Heather Maria Johnson, civil rights program director for the NLCHP, notes that “tent cities are not a long-term solution,” but she says they remain a place where “people can get back on their feet without fear of arrest.” And in a tough economic climate, tent cities have continued to proliferate. In June, Rev. Larry Rice filed suit against the city of St. Louis for preventing him from establishing a homeless encampment.

The Lakewood tent city, meanwhile, is a rare place of stability for its residents, and keeping it open is their first priority. “There is an undeniable … push to displace the existing populous,” says Brigham’s son Steve, who is trying to forge links between the encampment and public housing residents. “While everyone has the right to live in this town, there is a community being ripped up by its roots.”