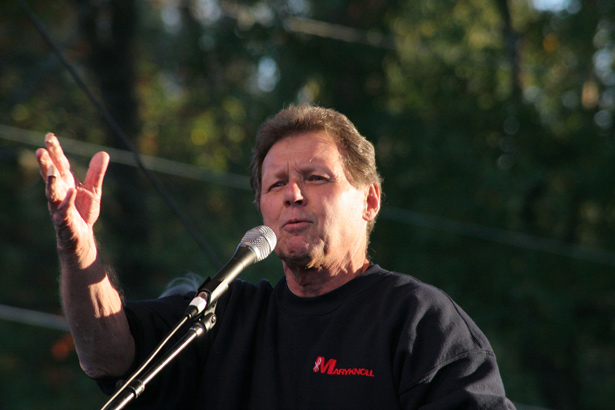 I should begin this review of Roy Bourgeois’ eloquent pamphlet, My Journey from Silence to Solidarity, which is both autobiography and polemic, with a disclosure—that, after interviewing Bourgeois at length on several occasions, I consider him a friend. For me, an angry ex-Catholic atheist, Roy Bourgeois represents all that is admirable in Christian moral witness, more often than not honored in the breach by professed Christians. Indeed, far too many Catholics would much rather look the other way rather than disagree with a bishop or—heaven forbid!—the Pope.  Yet that is precisely what Bourgeois has done, and done courageously: stand up publicly to Vatican sexism, as a matter of conscience.

Bourgeois writes this little pamphlet in a direct, unassuming style. My Journey from Silence to Solidarity begins with Bourgeois’ recounting of the times he did remain silent in the face of injustice, of the times he stood on the sidelines rather than demonstrate solidarity with the oppressed. Born and raised in Louisiana, young Roy took for granted that the Catholic parish he was a member of was segregated, along with the public schools he attended. He accepted the usual rationalizations, “It’s just our tradition” and “separate but equal.” Following high school graduation, he attended college in Louisiana, desiring to be a geologist and become rich oil prospecting. The civil rights movement of the 1960s was just getting underway, but he paid that no mind either.

After one year Roy dropped out of college and enlisted in the Navy, opting to go to Vietnam, a starry-eyed patriot who believed it was necessary to “stop communism” over there lest we have to fight it in California. But his eyes were opened in Vietnam, where he volunteered at an orphanage directed by Father Lucien Oliver, a man he calls “a peacemaker, a healer who would have tremendous influence on my life.” At the orphanage, which held over 300 children, he began to see the reality of U.S. policy in Vietnam, and wrote in My Journey from Silence to Solidarity, “Their parents had been killed in the war, most by our guns and bombs.  Life at the orphanage was a real struggle for survival…and brought conflict and sleepless nights.  Seeing the suffering of the children at the orphanage forced me to question our presence in Vietnam, and I started to discuss this with my fellow officers.” (Bourgeois was a naval lieutenant.)

For this he was directly reprimanded by his commanding officer, who told Bourgeois bluntly, “Lieutenant, your job in the military is to implement our country’s foreign policy, not to question or discuss it.” When Bourgeois brought up the orphanage, the commanding officer shouted at him and walked out.

Upon his discharge from the military, Bourgeois returned to his hometown in Louisiana a hero, having won the Purple Heart in Vietnam when his barracks was attacked by the Viet Cong and 14 persons were killed.  His experiences in Vietnam had changed a number of things in him, among them his views on race and racism.  While never an active segregationist, he’d taken it for granted and never previously questioned it, but serving with African Americans in basic training and Vietnam and returning to Louisiana to see that racism still prevailed despite certain changes—the public schools and the Catholic church he’d attended were integrated—now made him angry. Invited to join the local chapter of the Veterans for Foreign Wars because of his war service, Bourgeois told the local VFW, which had a separate chapter for African Americans, he’d join only when it was integrated. He calls this the first stirrings of a public conscience that would mark so much of his later career.

While in Vietnam Bourgeois felt a call to the Catholic priesthood, which he discussed with the chaplain, who recommended he apply to the Maryknoll Missionary Order.  Bourgeois enrolled in the Maryknoll seminary in Ossining, New York shortly after his stay in Louisiana.  Despite Bourgeois' growing antiwar convictions, he was still hesitant and doubtful about resisting war at Ossining, so much so that he boycotted a speech given there by Jesuit antiwar resister Dan Berrigan. When Bourgeois later recounted this to Berrigan, Berrigan was jovial and supportive, knowing full well the issues Bourgeois still had to work out.  As Bourgeois writes, “Becoming a true peacemaker is a process; it takes time to work through many issues.”

After his ordination in 1972, Bourgeois was sent to La Paz, Bolivia, where he served as a Maryknoll priest until 1977.  He saw firsthand the oppression of the Bolivian peasants he worked with, and also their egalitarian faith community, so in contrast to the traditional top-down hierarchy of official Catholicism. Bourgeois also saw the complicity of U.S. foreign policy in this oppression, through its support of Bolivian dictator General Hugo Banzer. Because he chose to live in the barrio in La Paz rather than a comfortable rectory, Bourgeois was immediately considered suspect, but as a priest and a foreigner, he was able to get a pass into the prisons and talk to the political prisoners there. He documented cases of torture of these prisoners, sharing the information with a Bolivian ecumenical group of priests, nuns and laypersons who were human rights activists. Bourgeois also returned briefly to Washington, D.C., where he informed members of Congress of this torture and other human rights violations carried out under the Banzer government. His visit was reported to the Bolivian government, and in August 1977, days after his return to Bolivia, he was declared persona non grata, deported and refused any right to return.

From that point, Bourgeois' work as a Maryknoll priest led him to focus on the repression in El Salvador, in particular the assassination of Archbishop Romero and the murder and rape of four Catholic women working there. The latter galvanized him to found SOA Watch, as the nuns' killers had all been trained by the School of the Americas (now known as WHINSEC), in Fort Benning, Georgia.

It was through Bourgeois' work with SOA Watch that he met many devout, committed Catholic women who felt, as he had, a calling to the Catholic priesthood, but from which they were barred because of their gender.  This moved Bourgeois to become a devoted advocate of women’s ordination as well.  He first spoke out publicly in 2001 on a Vatican radio broadcast about SOA Watch, mentioning it at the end of his interview—which drew an angry and abrupt ending to his broadcast.

Bourgeois relates this story in a flowing, eloquent and anecdotal way in the first 16 pages of My Journey from Silence to Solidarity: a “seamless web” (to use the phrase made notable by the late Cardinal Joseph Bernardin, Archbishop of Chicago) of awakening to the injustice around him. The remainder of the pamphlet is devoted to Bourgeois’ activities confronting Vatican sexism and supporting women’s ordination, and of the attempts of the Vatican to silence and punish him. All this is told in a straightforward, earnest way that demonstrates not only Bourgeois’ indomitable commitment, but his underlying humility.

My Journey from Silence to Solidarity expresses well those key ideas that inform Bourgeois’ commitment. The first is his notion that he grew to unhesitatingly accept, that “silence is the voice of complicity.” The second, taken from St. Paul’s Epistle to the Galatians, 3:28, appears on the back cover, “There is neither male nor female. In Christ you are all one.” And the third is that the call to the priesthood is a direct gift from God, bestowed to women as well as to men. As Bourgeois has said on many occasions, “Who are we as men to say to women ‘Our call is legitimate, but yours is not’?”  Indeed, Bourgeois writes, “Sexism, like racism, is a sin. And no matter how hard we may try to justify discrimination against others, it is not the way of our loving Creator who made us all equal.” Bourgeois even cites in defense of his “disobedience to the Church” Pope Benedict XVI himself, who as Cardinal Joseph Ratzinger specifically stated the duty to follow one’s conscience “even against the requirement of ecclesiastical authority.”

Bourgeois dedicates My Journey from Silence to Solidarity to the memory of Sophie Scholl, who along with her brother Hans and others who were members of the White Rose resistance, were executed by the Nazis in 1943. Bourgeois also cites as heroic examples Rosa Parks and Franz Jagerstatter, an Austrian farmer and father of four children executed for refusing to join Hitler’s army. My Journey from Silence to Solidarity is a powerful must-read, eloquent testimony of one man's ongoing struggle against injustice. It is also an important and honest statement about growing, of moving “from silence to solidarity.”

My Journey from Silence to Solidarity is available for $7 by request from Roy Bourgeois, at P.O. Box 3330, Columbus, GA 31903, phone/fax 706-682-5369. It is now in its second printing, the initial run of 5,000 copies having run out; it’s also available as a PDF at www.roybourgeoisjourney.org, and reproduction of its contents is specifically permitted.

George Fish, a freelance writer living in Indianapolis, has written for Dialogue & Initiative, Monthly Review, Political Affairs, Against the Current and Socialism and Democracy.