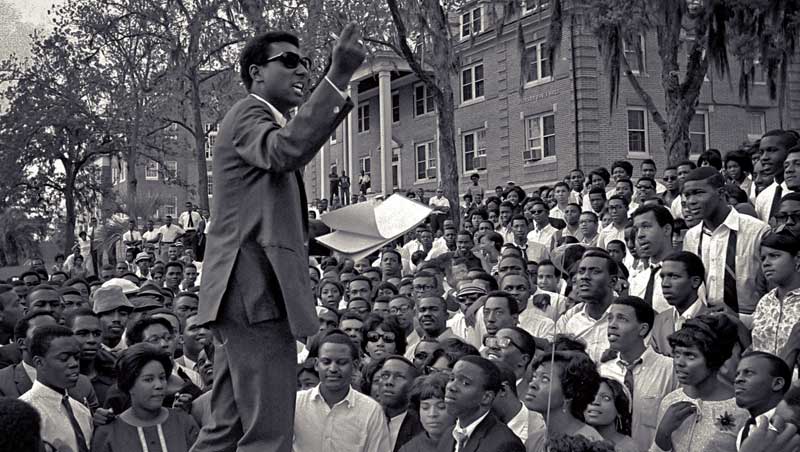 The Battle for Black Studies

The forgotten African-American education-reform movement of the ’60s and ’70s.

In the fight to ensure that anti-racist and anti-imperialist perspectives were included in curricula, students were jailed, suspended, wounded and assassinated.

Martha Biondi challenges our collective amnesia in her new book, The Black Revolution on Campus. For this reader, it was like a walk down memory lane, with footnotes. Entering Boston College in 1970, I missed many of the major anti-war protests, such as a campus shutdown in the spring of 1970, but I had the privilege of participating in campaigns that strove to overhaul a racist university system. We marched for a Black studies department; for an increase in the number of African-American students, especially from the inner city; and for a boost in the financial aid they received. As Biondi so aptly relates, African-American students of that era were absolutely convinced that by influencing the university and building black self-determination and intellectual leadership, they could effect social and economic change in our nation.

In her meticulously researched account, Biondi, an African-American studies and history professor at Northwestern University, goes far beyond nostalgia to provide a deep look at the mechanics and conflicts of the student protests of 1968-1973, the opposition they faced and what they ultimately accomplished.

The first seven chapters of the book trace the brick-by-brick building of the Black revolution. Biondi describes the creation of on-campus organizations such as Black Student Unions, the energy stoked by various meetings and conferences, and the critical role of off-campus efforts, including independent schools and organizations such as the Institute of the Black World. She threads together some of the most important campus protests, including those at San Francisco State, Northwestern, Harvard and City University of New York (although she puzzlingly excludes Cornell University, where African-American students famously seized a university hall).

Alarmed by the protests, academic administrators responded in a variety of ways. Some were willing to compromise, others resigned, and others, such as S.I. Hayakawa at San Francisco State, reveled in their obduracy. In an attempt to crush a student strike, Hayakawa called in hundreds of police officers for a series of bloody crackdowns that had the unintended effect of galvanizing the movement.

Biondi’s chapter on the Black revolution at historically black colleges and universities (HBCUs), such as Howard University and South Carolina State, is especially absorbing, speaking as it does to the conflicts in the African-American community around issues of social change. Too many African-American college presidents were invested in the status quo, either because of their own conservative beliefs or because of pressure from funders. Many HBCUs had grown less radical over the past decades—amazingly, Howard had a stronger Black studies focus in the 1930s than in the 1960s. But students at HBCUs were adamant about change and confronted administrators, taking over buildings, striking and making curricular demands.

At predominately white schools, some black faculty enthusiastically supported student protests even at risk to their careers, but others were skeptical. At Harvard, political scientist Martin Kilson went so far as to publish his objections in the New York Times Magazine, asserting that Black studies watered down the curriculum and that Harvard had relaxed its admissions standards by admitting black students.

Unfortunately, Biondi—or her publisher—reinforces gender bias with the photos that are included in the book. Only one features a black woman, Eva Jefferson (later Eva Jefferson Patterson) of Northwestern University, speaking at a rally in Chicago. Perhaps no other pictures were available, but it would have been useful to see some pictures of the “women behind the scenes” who are often rendered invisible.

Every time Biondi made a passing mention of sexism within the movement, I impatiently awaited more analysis. She speaks only briefly of the men who rejected women’s leadership and of the role women nonetheless played in keeping the movement alive. She partly addresses my concerns in one of the concluding chapters, where she spends a few pages writing about gender issues, noting that African-American women criticized male dominance in Black studies from the get-go and that the ‘70s and ‘80s saw an outpouring of black feminist writing that transformed the field.

Still, the book is riveting in its descriptions of the challenges that black students faced as they entered colleges that were committed to a narrow Eurocentric pedagogy. Such colleges thought that African-American students should be “grateful” for their admission. Instead, students challenged racism and imperialism in the curriculum.

Readers who are engaged in contemporary higher education issues, as I am, will find particularly fascinating outcomes of the Black studies movement. Biondi reviews a range of today’s African-American studies programs, and investigates how some have been folded into ethnic studies—which, she notes, can cramp funding and increase marginalization but also foster intellectual collaboration. While the number of Black studies departments is smaller than it was two decades ago, and their pedagogy has diversified, Biondi concludes that the field has “not only survived but also grown to have international stature and presence.”

The final chapter is a brief meditation, in Biondi’s own voice, of the impact of the Black revolution on campus. One such impact is in the generation of leaders it fostered: Biondi lists the black student protestors who landed as lawyers, doctors, activists and ministers. As Biondi points out, these students did something remarkable—they “translated Black Power theories into concrete gains.”

Biondi’s book is a critical reminder of the sacrifices that so many students made to ensure that anti-racist and anti-imperialist perspectives were included in academic curricula—some were jailed, some suspended from school, and some wounded or assassinated.

For seasoned scholars this will be an engrossing reminiscence. For students and emerging scholars, it will be a lesson in a history that has been all but forgotten.

Julianne Malveaux is the president of Bennett College for Women in Greensboro, N.C. She is an economist, author and commentator, and has been described by Princeton professor Cornel West as "the most iconoclastic public intellectual in the country."