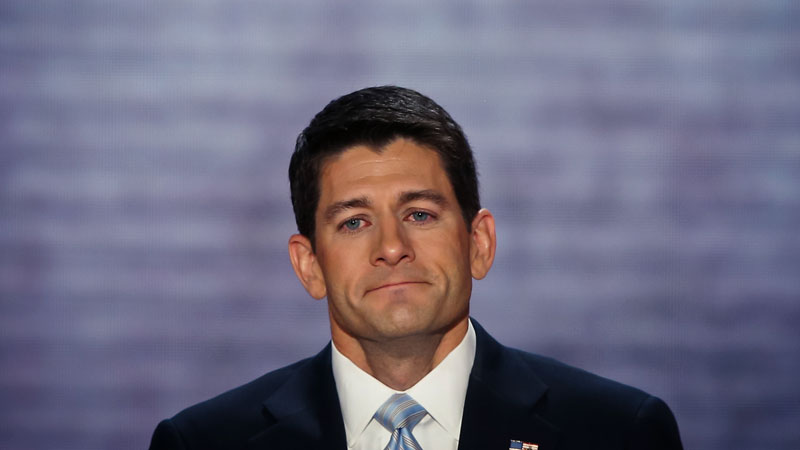 BY Chris Lehmann
Share TweetReddit50 EmailPrint
Paul Ryan has never “built” a thing in his life—except for constructing a career out of a long series of disingenuous arguments to cut federal entitlements. Yet in the curious logic of modern conservatism, the 2012 GOP vice-presidential nominee is a horny-handed son of toil. Around the time his father died, the young Ryan launched himself toward independence, he has rushed to remind voters, via the late-20th-century equivalent of an apprenticeship in rail-splitting: He worked at McDonald’s.
As he was flipping burgers, Ryan steeped himself in the words of Ayn Rand, in the manner of many a Middle American teenage boy coveting an image of himself as an Übermensch-in-waiting. Rand’s casually brutal celebration of possessive individualism was the North Star of Ryan’s early career. In a 2005 speech before a crowd of true believers at the Atlas Society, Ryan announced that “the reason I got into public service … if I had to credit one thinker, it would be Ayn Rand.”
Yet, as a militantly non-productive member of society, Paul Ryan has no place in the austere moral order that Rand envisions. Her Promethean heroes are hewers of rock, designers of skyscrapers and fabricators of steel—modernist gods, dispatched, it seems, to deal out fierce retribution to the puny, whinging statists. It’s no wonder that today he’s backpedaled his Randian past. His mentor’s vicious social philosophy won’t play on a national stage that demands candidates display a pseudopopulist common touch.
Still, an influence this deep and formative can’t be wished away. The anxieties of a man haunted by the towering eminence John Galt have found expression as predatory policy-making. Everywhere in Ryan’s piously admired budget forecasts are the telltale marks of the Randian faith. Capital gains and corporate tax rates are slashed on the grounds that the world-building beneficiaries of such giveaways must, as an ineluctable property of their nature, restore the battered U.S. economy to a hale state of virtue, in exactly the same way that pure and heroic skyscrapers must rise above the petty envies of the common herd.
Conversely, of course, the unheroic recipients of Medicare and Social Security must be punished, mainly for the cosmic affront of needing government assistance in the first place. Of course, that the recipients of entitlements can stimulate economic activity on a far broader basis than the overlords of the paper economy—particularly in the midst of an economic crisis crippled by slack demand—is never acknowledged. This is because Randians view the punishment of the weak as a metaphysical, rather than an economic, imperative.
It’s a point Rand herself made in Atlas Shrugged when she detailed how every fatality in a Galt-engineered train crash was a shiftless apostle of the welfare state. These cringing layabouts simply had it coming. Ryan was out retailing his own version of this hoary gospel during the 2009 stimulus debate, denouncing the Obama administration’s spending plans as a trespass that “offends the morality of individuals working toward their own free will to produce, to achieve, to succeed.”
You’d expect a Rand devotee mired in the bureaucratic maw of the federal Leviathan to emulate her heroes by cultivating their sneeringly autocratic flare for rebellion. But Ryan has been an arch GOP loyalist, backing George W. Bush’s massive expansion of Medicare drug coverage and the costly invasion of Iraq, in spite of his carefully curated image as a crusading budget slasher.
On closer look, though, Ryan’s Randianism seems like a pose adopted as a deeper psychic compensation to make up for a chronic need to please in every conventional manner. He shows a craving for approval going back to his senior year in Janesville, Wis., when the yearbook named him the school’s “biggest brownnoser.” And that penchant for not merely pursuing, but luxuriating in, the ripest opportunity has stayed with Ryan ever since.
Like Ryan, many of the signature members of the D.C.-based Rand cult are obsessive climbers, trying desperately to persuade themselves that they’re creative and world-conquering iconoclasts. In this one limited sense, Paul Ryan may well be the ideal running mate for Mitt Romney.