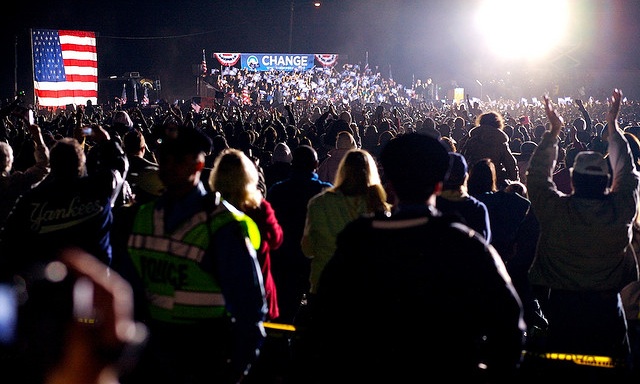 Barack Obama has changed America in word, if not in deed.

It’s a long, hard road, but I’d argue Obama's aspirational language will help get us closer to being the America we should be, an America that fully lives up to the best in our traditions.

Progressives can argue—and certainly do—over whether President Barack Obama has delivered on his 2008 campaign promises to bring meaningful change to America's political institutions. But in his new book, Obama's America: A Transformative Vision of Our National Identity (Potomac Books), Ian Reifowitz, an associate professor of history at Empire State College (SUNY), argues that Obama has changed how we conceive of ourselves as a nation. In These Times recently interviewed him over email about Obama's aspirational approach to America, what motivates the Right's attacks on Obama, and Dinesh D'Souza's lack of credibility.

In his speech to the 2012 Democratic National Convention, President Obama said, “We also believe in something called citizenship … the idea that this country only works when we accept certain obligations to one another, and to future generations.” He added, “We leave no one behind. We pull each other up.” These words seem more like fantasy than accurate history. Is Obama expressing some new vision of America living up to its ideals, or is he engaging in the long tradition of politicians spouting platitudes?

Obama often takes an aspirational approach when talking about what America means and how we define our core political values. He is talking about what we “are,” in the present tense, but his intent is to influence what we will become going forward. Strategically speaking, I’d argue people are far more likely to adopt the beliefs he is advocating if he says that those beliefs are already mainstream than would be the case if he talks about what we “should” believe. People want to be in the mainstream on values far more than they want to be an early adopter. Speaking aspirationally is the best way to make the fantasy into reality.

But I’ll add that the words quoted above should also be considered with this other section from Obama’s speech: “a freedom which only asks what’s in it for me, a freedom without a commitment to others, a freedom without love or charity or duty or patriotism, is unworthy of our founding ideals, and those who died in their defense.”

Together, these remarks represent a clear ideological statement. They stand opposed to the Ayn Rand-derived, hyper-individualism of Romney-Ryan, an ideology at the heart of contemporary right-wing, laissez-faire conservatism. You heard that idea expressed most clearly by Paul Ryan at the Republican National Convention in Tampa, when he described his idea of America as: “an American journey where I could think for myself, decide for myself, define happiness for myself. That's what we do in this country. That's the American Dream. That's freedom.”

Obama’s civic nationalism and emphasis on Americans’ commitment to one another are very different from Ryan’s. The latter centers on a very limited definition of freedom coming out of Rand’s objectivism. It isn’t mainstream, and Obama is right to draw that contrast. This is a rhetorical fight progressives need to wage and win.

The other section worth highlighting focuses on inclusion: “we don’t think that government is the source of all our problems—any more than are welfare recipients, or corporations, or unions, or immigrants, or gays, or any other group we’re told to blame for our troubles.” Again, that's aspirational. Of course plenty of people scapegoat certain groups of Americans. But saying “we don’t do that,” is going to convince people to stop scapegoating far more effectively than if he says “millions of Americans scapegoat, but we shouldn’t,” because by speaking aspirationally Obama is saying that scapegoating is un-American. He is painting inclusion as being in harmony with true American values, and prejudice as being incongruous with them, just as reformers from Frederick Douglass, to Martin Luther King, to Harvey Milk have done.

Obama's America focuses a great deal on the rhetoric of Obama. But many on the left (and the right) complain that Obama uses the language of unity in order to disguise a very different agenda. The left says that it's a pro-corporate, militarist, right-wing agenda. The right says it's a socialist, radical, left-wing agenda. But they agree that Obama's words can't be trusted. What do you see in Obama's actions, in his policies, that matches his rhetoric?

After almost four years I believe it’s pretty clear what Barack Obama’s agenda is. He is a mainstream liberal Democrat, ideologically smack in the middle of the Democratic coalition. There are people to his left who’ve criticized him for not being left enough, and they are accurate, he isn’t on the far left. That much is clear. Those on the right believe anyone to the left of Rush Limbaugh is a socialist; they can’t (or don’t see it as useful to) differentiate between moderates, centrists, liberals and Marxists.

The language of unity, and specifically the language of cross-ethnic, American national unity that Obama has used so often strikes me as clearly progressive because it is a direct contrast both to laissez-faire hyper-individualism as well as to racial bigotry and other forms of prejudice. If Obama can get a middle-aged, middle-class white American to feel a stronger connection with someone different from himself on the basis of their shared American-ness, then that first person is more likely to be supportive of progressive ideals broadly defined, whether it’s on the economy or immigration or even gay rights.

Ultimately, left and right are relative terms. They are meaningless without a comparison that defines “left of what?” and “right of what?” Obama is to the left of conservative Republicans on virtually every domestic issue. On foreign policy, as he said in 2002 when he came out against the Iraq war, he’s no pacifist, he’s not against all wars, just “dumb” ones.

Would a President McCain have gotten us out of Iraq? I don’t know. Will a President Romney get us into future wars that a President Obama would avoid? I don’t know for sure, but I do know that Romney’s “shoot first, aim later” instincts were revealed in the reckless statements he made most recently after the attacks on the U.S. embassies in Benghazi and in Cairo. We can say that Obama takes a more multilateral approach compared to the go-it-alone, preemptive war doctrine followed by George W. Bush, many of whose foreign policy advisers surround Mitt Romney.

Dinesh D'Souza has a book out with the title, coincidentally, “Obama's America,” taking a perspective diametrically opposed to yours. You've harshly criticized D'Souza; why do you think his vision of Obama is wrong?

D’Souza has no credibility. I’ve written elsewhere about D’Souza offering a quotation from Obama’s Dreams From My Father that supposedly proved that Obama was essentially carrying out his father’s ideology, but when I checked the quotation myself, it showed essentially the exact opposite. D’Souza left out the second half of Obama’s reflection, the part where he talked about how, after learning more about Obama Sr.’s failings in life, the son now felt free from trying to follow in his father’s footsteps. As a scholar, that kind of deceptive use of a quotation was it for me regarding D’Souza’s credibility.

Are the right-wing attacks on Obama as foreign and un-American just the standard conservative attacks on a liberal politician's patriotism, or do they reflect a deep-seated bigotry? Or are they perhaps reactions to the effectiveness of Obama's vision of a united America and the threat it poses the Republican Party?

The fact that other Republicans, John McCain and Jon Huntsman being the most prominent, specifically rejected attacking President Obama’s American-ness, makes clear that there is a debate on the right about whether such attacks are acceptable. There’s nothing wrong with criticizing Barack Obama’s policies. Attack their content, criticize what one thinks will be their consequences. Call them wrong. Call them harmful. But there’s no call to characterize them or Obama as “foreign.” None. Doing so can only be an attempt to play on bigotry.

Your last question is a very important one. Yes, I agree that part of the motivation for the attack is the fear that some on the right have about the political future of their movement. If Obama succeeds in strengthening the ties binding together Americans of different backgrounds, then a conservatism that relies on dividing Americans will fail. That’s why people like Rush Limbaugh are so invested in keeping Americans divided, especially by race. Divide and rule is how the real elite maintains its power over the broad majority of Americans of every race. I write in my book that the great fear on the right is a cross-ethnic “American” coalition of middle- and working-class Americans united against the elite.

Did Obama's unique childhood—growing up overseas, often raised by his white relatives, and in multicultural Hawaii where he rarely faced serious racial hatred—create the circumstances that allow him to embrace this vision of America as a shared family? And how can others embrace Obama's vision when they have grown up in an America full of segregation and discrimination?

I’d say that his background, in particular the fact that Obama had to consciously grapple with his own identity—racial, religious, national—made him especially sensitive to the fact that identities are not something we’re born with. They are created, constructed. I believe he recognizes that a people does not come to a collective identity by accident, but rather that we decide what kind of national identity to have. Identities are debated and then imparted; they are not inherited. Obama’s background made him especially open to seeing that identities are not fixed, and that ties across racial and other lines are possible.

The last part of your question is especially important. Obama does not describe America as “post-racial” or any other such idealized, whitewashed place. If that’s what he was doing, then people who grew up under segregation and continue to face discrimination would not be embracing his vision. But the support he has in non-white communities suggests those communities embrace his vision quite strongly.

The greater concern isn’t that those who’ve suffered from discrimination will reject his vision of cross-ethnic American unity; it's that those who still harbor prejudice will reject that vision. It’s a long, hard road, but I’d argue his aspirational language will help get us closer to being the America we should be, an America that fully lives up to the best in our traditions.