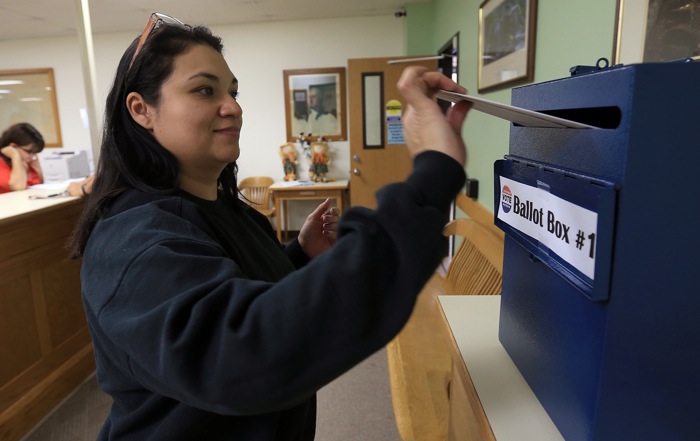 Miranda Reyes casts her ballot at the Lincoln County Courthouse on November 6, 2012 in Hugo, Colo. (Photo by Doug Pensinger/Getty Images)

The Latino vote flexed its muscle on Tuesday, and immigration reform has suddenly moved off the back burner.

Republicans are under pressure to soften their stance or risk losing Latino voters forever. Some voices on the far Right are finally coming to the middle. Shockingly, Fox News' Sean Hannity said on his radio show that he's "evolved on immigration."

The voices and votes of Latino voters were heard loud and clear on election day, and they finally may have the political clout to shape a national agenda on the immigration issue.

There is no doubt Latino voters helped deliver the election for President Obama. Already there is talk in the Congress of pushing for immigration reform legislation early next year.

Republicans are under pressure to soften their stance or risk losing Latino voters forever. Some voices on the far Right are finally coming to the middle.

Shockingly, Fox News' Sean Hannity said on his radio show that he's “evolved on immigration” and now supports a pathway to citizenship for undocumented immigrants already here who have no criminal records.

House Speaker John A. Boehner said in an interview Thursday with ABC News that we need a “comprehensive” approach indicating there may be movement in the House. Sens. John McCain (R-Ariz.) and Lindsey Graham (R-S.C.) now need come back to the table on this issue they once supported.

It is estimated that a record 12.2 million Latinos voted, according to NALEO, the National Association of Latino Elected and Appointed Officials. Nationwide, Latinos increased their percentage of the total vote from 9 to 10 percent of the electorate, according to the Pew Hispanic Center. More than 70 percent voted for President Obama.

Latinos also helped deliver Florida for Obama, increasing their share of the vote from 15 percent in 2008 to 17 percent in 2012. Obama won the Latino vote by 60 percent to Romney's 39 percent in Florida, according to the Miami Herald.

Several polls indicate that even Florida's Cuban-American population, once staunchly Republican, is now becoming more Democratic. A poll by Bendixen & Amandi International (a firm that worked for the Obama campaign) found that the president carried the Cuban-American vote in Florida 53 to 47 percent. Another poll, by Edison Research, showed Obama winning the state's Cuban-American vote by 49 to 47 percent, although the results were within the margin of error..

Cuban-Americans only comprise 3.5 percent of the total Hispanic population in the United States, with Mexicans the largest Hispanic group at 63 percent, followed by Puerto Ricans at 9 percent, according to Pew Hispanic.

Romney alienated many Latino voters by shifting further to the right on immigration to win his party's nomination and by advocating the absurd idea of “self-deportation.” He supported Arizona's anti-immigration law SB1070 and would not come out in full favor of the DREAM Act. He supported a military option, but not as education, as a means for undocumented youth to gain a green card.

When the most conservative Hispanics become more Democratic, it sends a serious message to the political establishment that they need to listen to their concerns. For the first time on the national stage the power of the Latino vote was heard.

President Obama must harness this influence to deliver comprehensive immigration reform, including a permanent solution for undocumented youth who qualify for the DREAM Act.

Earlier this year, the president approved a temporary solution for undocumented youth to give them work permits and defer deportation. This de facto DREAM Act was a move to win Latino voters, and it appeared to have helped the president. But it is not a permanent solution without a pathway to citizenship.

It's something of a milagro that so many Latinos supported the president in spite of the record number of deportations under his first term—more than 1.2 million.

But the alternative, Mitt Romney, was more frightening.

The president knew that Latino voters would be key to his re-election. He told the Des Moines Register that if he won, Latinos voters would be a major reason why, and that he would work to pass immigration reform in the first year of his second term.

So now that Latino voters have spoken President Obama must come up with a way to say gracias.

If the president does not promote and secure the passage of meaningful immigration reform and the DREAM Act, Latino voters could turn against the Democratic Party in the next election. Or worse, they could stay home and not vote.

Proposed legislation should not just be a solution for undocumented youth: It has to include their parents and grandparents. It should not be a guest worker program, but legislation that make immigrants who grew up here, and their family members who have roots here, into equal and permanent members of society.

In a poll by impreMedia/Latino Decisions, 60 percent of Latino voters said they knew someone in their lives who was undocumented. They want the president and the Congress to do what is morally right, and by adding additional taxpayers immigration reform could help boost the economy.

The question is whether there will be two bills, one for the DREAMers and one for their parents and relatives. Or will the president push for one piece of legislation? If he separates the two, it may be harder to get both passed.

Too much is at stake for the president to push immigration to the back seat.

If the 2016 Republican candidate for president is sympathetic to immigration reform, Democrats could risk losing many of the Latino voters they have secured. A candidate such as Jeb Bush, long a supporter of immigration reform, might woo away Latino voters. Marco Rubio is another possible candidate, but just because he is Cuban-American doesn't mean most Latinos would vote for him. He needs to adopt more progressive views on immigration to win their support.

But Republicans first must understand their party will lose again if they continue their harsh anti-immigrant rhetoric and only reach out to white voters.

Obama can start by talking to Republicans in states where the Latino population is growing and where their votes gave President Obama the edge.

We can't have a hodge-podge of state laws. We need national immigration reform to ensure that all immigrants who contribute to this country are treated with equality.

Teresa Puente is a professor of journalism at Columbia College in Chicago and a former member of the editorial board at the Chicago Sun-Times. She launched the website Latina-Voices.com to support Latino women in the media. Her blog Chicanisima can be read at chicagonow.com.