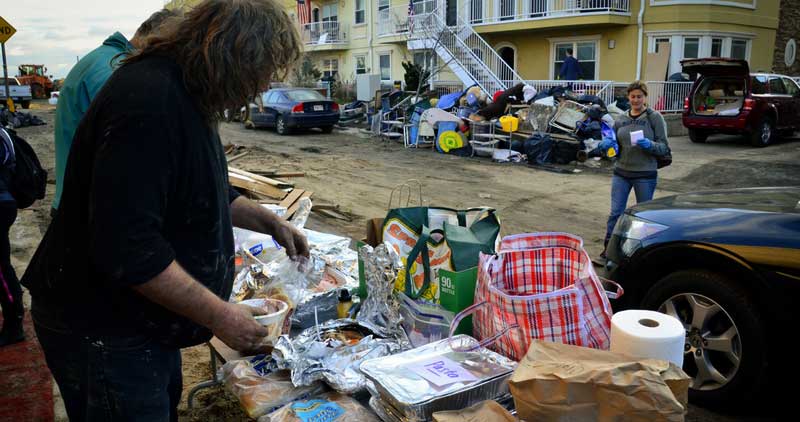 In the wake of Sandy, Occupy helped with food and donations, as pictured here in Far Rockaway. How can we continue to fan Occupy's flames?

Somewhere Under the Rainbow

When will the Left move on from movement-building?

There should be no honeymoon for Obama or holiday for Congress. Now is the time for hitting the ground running, both as a militant minority and a wider progressive majority.

A rainbow coalition of Democratic voters gave Barack Obama a victory over big Wall Street money and the steady drumbeat of hard-right racism. Nearly 45 percent of the president’s voters were people of color, with their numbers augmented by white women, youth and trade unionists. It was enough to keep him in the White House, but not enough to decisively change the overall balance of forces.

Now the harder struggles begin—for Obama, for the Democratic Party and for the Left. Tough choices face all three.

Obama has to decide how he wants to govern in his second term. Does he want to be remembered as a center-right conciliator of neoliberal austerity and militarism who discounted key components of his rainbow? Or does he want to forge a deeper center-left majority coalition that can make wise use of government to create jobs, spur growth, promote equity and find solutions to global problems short of war? Since he has always been a liberal speaking mainly to the center, he can go either way.

The Democrats have a longer-term choice. Do they want to be the Blue Dog party of neoliberalism elite, best summed up by a Rahm Emanuel policy of “unite the center,” move to the Right and dismiss the Left? Or do they want to revisit their Keynesian roots with a Green New Deal that builds an educational and manufacturing infrastructure for the 21st century? The first course means the country continues its steady reactionary drift, rewarding a privileged few. The second means a progressive turn that can reward the rest of us.

The Left faces a choice, too. Do we continue trying to build mass movements, in the hope that they will be the engines of a new and transformative strategic politics? Or do we go further than our usual “movement building” mantra and put new emphasis on organization building? We’ve seen the Wisconsin and Ohio uprisings, Occupy Wall Street, and the pressing of the Robin Hood tax by the Congressional Progressive Caucus—all of which are the beginnings of an emerging popular front against finance capital, one pregnant with new potential. But without organization, movements simply ebb and flow—and often dissipate. Our task now is to combine fanning the flames with a new organizing thrust.

We have to evolve political groups with electoral capacities than can win elections locally. We must expand the ranks of the Congressional Progressive Caucus, turning it into our left- progressive pole inside the Beltway.

We have to encourage more social justice trade unions, like the Chicago Teachers Union. We have to grow our grassroots coalitions, like the Virginia New Majority, and to launch solidarity economy projects, like Cleveland’s Evergreen Cooperatives. We have to promote a new culture of educating with reason, promoting science over ideology, and defending the core democratic values of the Enlightenment. We must speak truth to power while we fashion the instruments to take power. In brief, we require a united, determined core of Left political organizers with a wider and deeper vision for economic democracy and a socialism worthy of the 21st century.

There should be no honeymoon for Obama or holiday for Congress. Now is the time for hitting the ground running, both as a militant minority and a wider progressive majority. The forces of “bipartisan compromise” and “grand bargains” are already working on plans, like Simpson-Bowles to bail out capitalism’s systemic crisis on our dime.

Politicians pay attention to organized money, organized voters and (at least occasionally) organized thinking. The Left is lacking in the first, but we can put the latter two into play. We rarely gain anything at the top that we haven’t already gathered the strength for at the base—and that ball is in our court, not Obama’s or the Democratic Party’s.