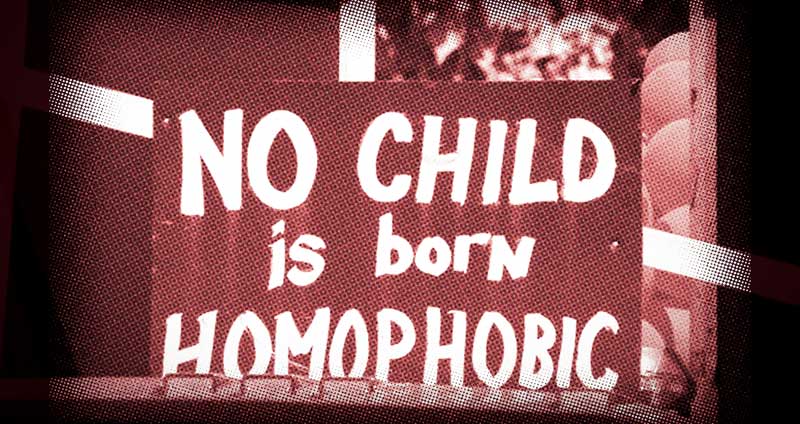 Nor will any adult be labeled as such, under the AP’s new guidelines.

The Associated Press’s decision to favor ‘anti-gay’ over ‘homophobic’ isn’t as bad as some say.

“Anti-gay” is punctuated by a strength that “homophobic” can’t conjure. It is to be inescapably against gayness.

Over at the Associated Press, they’ve eliminated “homophobia.” David Minthorn, co-editor of the AP Stylebook, the vade mecum of the journalism world, says that the word—and others like it such as “Islamophobia”—ascribes “a mental disability to someone, and suggests a knowledge that we don’t have.”

The AP says “homophobia” is inaccurate and instead suggests “anti-gay,” a term both more neutral and more pointed: it labels people and policies as being against gays, for whatever reason, and implies a prompt to explain those reasons.

“Homophobia” was first coined by psychologist George Weinberg in the 1960s and popularized in his 1972 book, Society and the Healthy Homosexual. Weinberg—who isn’t gay—wanted to push back on the centuries-old idea that homosexuality was a disorder by putting the problem not on queers but on those who opposed us. The year after his book was published, homosexuality was removed from the Diagnostic and Statistical Manual of Mental Disorders.

There is, to be sure, something  a little ridiculous about the AP’s  logic. In common usage, “homophobia” no longer holds the  clinical connotations it once had. Surely the AP doesn’t really believe  that readers assume a psychiatric diagnosis is being made when they read that someone or something is homophobic. These days, “homophobia” is rarely read that narrowly, in the same way that “xenophobia,” for example, might enter into an article about foreign policy without any clinical connotations. Instead, “homophobia” has become a catch-all term for anti-gay sentiment, heterosexism, or hate (fear-based or otherwise) directed at LGBTQ people.

Eliminating the idea of fear from the discussion of people and policies that deny equal status to LGBTQ people has  a number of potential effects. On the one hand, it eliminates the possibility of linguistically legitimizing anti-gay behaviors and structures through the notion of a phobia. It also removes an easy out for people who don’t experience or recognize their bias as being rooted in fear. On the other, it has the potential to erase the fact that fear, or at least anxiety, does play a part in many aspects of bigotry of any kind. Placing “anti-gay” alongside its frequent comparatives, “racist,” “sexist” and “ableist,” it is hard to argue that they don’t all have some relationship to fear—anxiety about embodied difference, about violence, about economic standing, about gender roles, about the dismantling of centuries-old hierarchies and power relations.

The idea of being afraid of homosexuals is a potent one, and for queers, sometimes oddly empowering. It flips the historical dynamic between the LGBTQ minority and the oppressing, often violent, heterosexist majority. But, in fact, people are put off by queers for reasons beyond just fear: religious beliefs (the motivator in these cases being a fear of God and consequences, not of the offending homosexuals), hatred, and plain old ick at our (real and imagined) sexual practices, among others.  To that end, “anti-gay” is punctuated by a strength that “homophobic” can’t conjure. It is to be inescapably against gayness (and the rest of the queer umbrella, probably another inevitable semantic shift—“anti-LGBTQ”?) It is calling an ace an ace. And it’s more accurate when considering structural aspects. Laws and businesses can’t be phobic, but they can impose policies that are harmful to LGBTQ folks.

To be clear, the AP merely suggests dropping the term, along with a slew of others, including “ethnic cleansing,” which it calls  a “euphemism for pretty violent activities.” Its suggestions aren’t all so clean-cut, though, nor do they call for across-the-board adherence to the highest lexical accuracy. In October, the AP twisted itself into a knot to allow continued use of “illegal immigrant,” though as immigration attorney and blogger David Bennion has pointed out, the term “is not accurate because it usually assumes a person’s immigration status when that status has not yet been determined by a court of law.” The AP got plenty of flak for that.

Of course, AP guidelines aren’t the determining factor for word usage, and undoubtedly “homophobia” has a lengthy life ahead of it. But the decision is a nudge away from a term that is both dated and not always accurate. Rather than providing a catch-all label to write off despicable behavior, journalists—and everyone else—should be looking toward the whys.