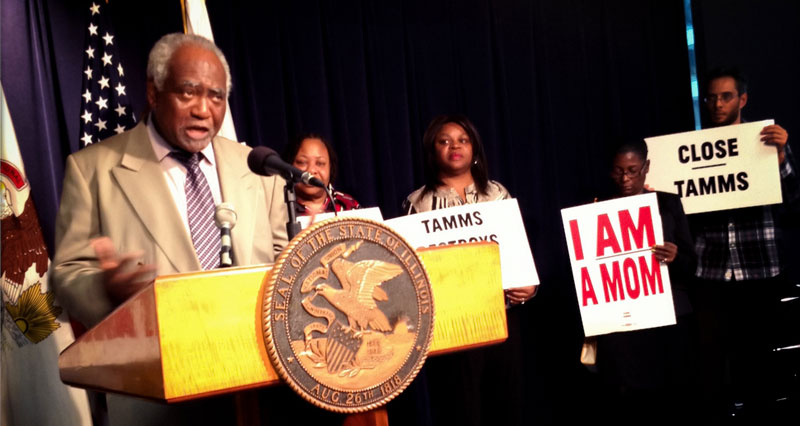 On September 26, 2012, Chicago lawmakers and prison-reform advocates made the case to close Tamms, Illinois' supermax prison.

Chicago labor activist James Thindwa believes that instead of retrenching around the issue of prisons, AFSCME should be reaching out to community organizations to build a broader front against state budget cuts and solicit ideas about how to relocate prison workers in the long term.

Update: On December 19, an Alexander County judge lifted the injunction blocking the closure of Tamms and six other state facilities. Illinois prison officials began transferring inmates out of the facilities following this move, which was taken on an earlier order from the Illinois Supreme Court. The facilities are scheduled to close by January 4. The judge did not dismiss AFSCME Local Council 31's underlying lawsuit, however, and the union said in a statement on the closings that “AFSCME will be able to continue to seek a legal remedy that addresses the dangerous conditions that the closures will cause throughout the prison system.”

“I am a mom,” read dozens of signs lofted by protesters outside Illinois’ Tamms Correctional Center last spring. Many of the demonstrators were family members of the prison’s 100-plus inmates who are held in 23-hour-a-day isolation. But the slogan—an allusion to AFSCME’s famous 1968 “I am a man” campaign for striking sanitation workers in Memphis—was also seeking to shame the union that once marched alongside Martin Luther King Jr., for its current fight to keep the supermax prison open.

In June 2012, Illinois Gov. Pat Quinn announced that Tamms and five other state correctional facilities would be shuttered that August to help fill the state’s $43.8 billion budget deficit. But all have remained open thanks to a lawsuit filed by AFSCME Local Council 31, which represents guards and other workers at the prison. A bruising fight has followed between a union trying to preserve its members’ jobs and activists insisting that the labor movement must draw the line at supporting the prison industry’s cruelest facilities.

“From the day it opened, Tamms has been a financial boondoggle and a human rights catastrophe,” says Laurie Jo Reynolds, an organizer with the group Tamms Year Ten. In 2008, the organization began raising public awareness of the conditions faced by the inmates in Tamms’ supermax section, then numbering over 200—many of whom had been in solitary confinement since the prison opened a decade earlier. Long-term isolation has been linked to higher rates of mental illness and recidivism among prisoners.

Tamms Year Ten pushed first for reforms and then for the outright closure of the prison, thinking that, with state coffers low, the prison’s $26 million annual budget would seal its fate.

But in September, AFSCME, which is an In These Times sponsor, won a temporary restraining order that blocked the closings until Quinn finished bargaining with the union over their impact. Though Quinn’s office pledged that all of Tamms’ 302 employees would be transferred to other corrections facilities, the union maintains that the transfer of potentially violent Tamms inmates to other facilities will endanger prison workers. Anti-Tamms activists, in turn, accuse the union of fear-mongering. They point to drops in prison violence after states such as Mississippi and Maine curbed the long-term isolation of prisoners.

In October, a state labor arbitrator denied the union’s grievances over safety and said that the state had fulfilled its bargaining obligations. But an Illinois appeals court denied the governor’s request to lift the temporary restraining order, as well a subsequent injunction, which are still blocking the closings. As this article went to press, an Alexander County judge had yet to rule on AFSCME’s lawsuit.

AFSCME and Quinn are also wrestling over a new contract and pay increases for state government employees, which AFSCME says are long overdue. (AFSCME Local 31 did not respond to a request for comment.)

Chicago labor activist James Thindwa believes that instead of retrenching around the issue of prisons, AFSCME should be reaching out to community organizations to build a broader front against state budget cuts and solicit ideas about how to relocate prison workers in the long term. “The state of emergency in which labor finds itself demands that it seek a new strategy,” says Thindwa, a former director of Jobs with Justice and a current In These Times board member. “The African-American community and labor should be fighting together on worker and civil rights issues. But AFSCME’s unwillingness to acknowledge the crisis of mass incarceration is precluding this.”

Complicating matters, Illinois state legislators tried to restore funding for the facilities, predicting that the closures would dampen their districts’ economies and accusing Quinn of “governing from Chicago.” A motion to override the governor’s funding veto ultimately died, but AFSCME has said it will continue looking for ways to refund the facilities.

Pitting urban and rural populations against each other is “a common divide-and-conquer strategy” during prison-closure fights, notes Tracy Huling, a Soros Justice fellow. In response, she tells In These Times, prison reformers should start to look for ways to help mitigate the effects of closings, such as the retraining of prison workers or repurposing of closed prisons.

In the 1990s, an average of 25 prisons per year were built in rural America in the hopes of boosting local economies. But a 2010 study by researchers at Washington State and Ohio State University found that rural prison construction may actually impede long-term economic growth. This is because prisons tend to stigmatize host communities, attract only big-box retail stores and low-paying jobs, and redirect public works jobs to prison laborers instead of local residents.

Prison closings have now become an increasingly common way to address state budget deficits. But when inmates are merely transferred to other facilities, this may not reduce the overall prison population or correspond to other goals of decarceration activists. Reynolds, however, believes that the push to close facilities such as Tamms is not just a response to budget woes, but part of a public backlash against inhumane conditions.

“When we first started this work, few people knew about the extent of this problem,” she says. “Since then, we’ve seen growing public recognition that solitary confinement is a form of torture, and a real movement take hold.”