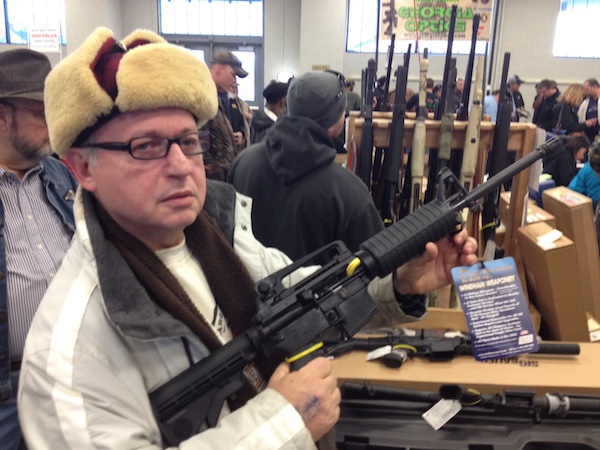 Staying in the Loophole

I don’t need to know his name, he doesn’t need to know mine. That’s how it works in a private sale, whether you’re buying a duck hunting shotgun or a 30-round capacity semi-automatic Windham Weaponry Heavy Barrel Carbine AR-15. No paperwork and no wait.

It’s three weeks since the Sandy Hook Elementary School shooting and Ben Kelkye, a big, affable bear of a man in a black National Rifle Association pullover, tells me I’ve chosen the wrong time to attend my first gun show. It’s just before noon and we’re standing in an agricultural pavilion at the Frederick Fairgrounds in Maryland where Kelkye, an NRA Master Training Counselor, Maryland Chief Hunter Safety Instructor and Youth Program Director, has positioned himself in a center aisle, behind a literature table stacked with firearms course offerings and an NRA two-sided fact sheet headlined “Feinstein Goes for Broke With New Gun-Ban Bill.”

The reason I’m out of luck, Kelkye says, is that most of the good stuff went early and fast. Crowds lined up outside the two pavilions well in advance of the 9:00 a.m. opening and have been streaming in since. The best of the private gun sales were completed in the first hour, and many of the hard-to-find quality items sold by registered dealers have already been scooped up. When asked to account for this unusually heavy volume, the kind you might expect in the weeks leading up to Christmas but not just after, he replies with a direct and diplomatic answer: “Some people think the government wants to take away their rights.”

It is, to be sure, very much a Second Amendment crowd. Silverado Gun Show, the promoter and organizer of this and similar events, prominently features links to the NRA on its website and peppers anti-regulation messages across its company-sponsored blog. As a responsible business concerned for the safety of its clientele, Silverado has established rules for all its gun shows, the first of which reads in all caps: “Loaded guns, in any form, handguns, rifles, shotguns, are not allowed in the show and this does include personal protection weapons. This does include any and all personal protection guns. A concealed carry permit does not exempt anyone from this rule.”

Sitting along a retaining wall and milling about in small groups, smoking cigarettes and drinking coffee in the courtyard separating the two pavilions, you come across clusters of middle-aged men in camouflage caps and hunting garb, shouldering rifles with what look like pipe-cleaner ramrods protruding from the barrels topped with little paper flags reading “For Sale.” One guy wears a homemade cardboard sandwich sign advertising a “pre-ban” Olympic Arms gun barrel for your AR-15 assault weapon at a $650 asking price.

These are unlicensed individual traders who have come to swap or sell weapons from their private collections. Some purchase tickets and carry their guns into the exhibit halls, while the more frugal simply conduct their business in the courtyard without springing for the eight bucks.

Inside, the scene looks harmless as a Star Trek convention. Perched atop a white plastic stool in front of a heat register sits a middle-aged man with a droopy white Fu Manchu mustache, cradling between his knees a Browning camouflage-marked shotgun he’s offering for $700. The crowd is comprised mainly of white men in their thirties, forties and fifties; you get the sense that they’re not so much threats to society as they are hardcore enthusiasts steeped in their own geeky nomenclature, hierarchies of status based on expertise and ownership, arcane knowledge, shared clothing and footwear preferences, and anti-government anti-immigrant braggadocio. A sign affixed to one semi-automatic handgun dealer’s glass display case reads: “At OUR tables ENGLISH will be spoken at all times by all present or NO SALES!”

While the most concentrated serious buying and selling occurs at the centrally located rectangular booths dominated by licensed dealers, the periphery of the hall is populated by the gun show equivalent of the Mos Eisley Cantina that Luke Skywalker visited on the Planet Tatooine. Here, sellers offer items such as the 6.2 million volt Shock n’ Awe stun gun the Talbots-attired saleswoman assures you can drop an assailant wearing as many as “three hoodies”; heavy safes that look designed to protect your guns from thermonuclear attack; bags of beef jerky; special tubes that allow you to siphon gas from automobile tanks without burning your mouth; and t-shirts and sweats emblazoned with messages such as “The First Rule of Gun Safety: Don’t Piss Me Off,” “Alcohol, Tabaco [sic], and Firearms: Who’s Bringing the Chips?” and “Appomattox Was Only Half-time.”

On the firearms selling floor, it’s all business. Licensed dealers oversee tables overflowing with new and used weapons while directing buyers to the paperwork areas at the far end of the table, where they will be required to produce a valid driver’s license and fill out the state police background affidavit.

So-called “regulated” firearms include all handguns, as well as semi-automatic assault-type rifles specified by manufacturer and type (as well as copies) in state law. Purchase of regulated weapons—whether through dealers or private sale—requires a background check and a seven-day waiting period. In Maryland, an individual is allowed to buy no more than one regulated firearm per month.

Purchase of non-regulated firearms—most shotguns, sport and hunting rifles, including some semi-automatic models—from a licensed dealer requires proof of identity and a less comprehensive background “insta-check.” These transactions generally take two to three hours to complete, with the buyer able to take the firearm home within a couple of hours of purchase. The licensed dealers I encounter at the gun show play it straight with regard to the paperwork and waiting requirements. The volume of business is such that any temptation to skirt rules just isn’t worth the risk.

The closest I come to uncovering what I think might be a violation turns out to be perfectly legal and abundantly nonsensical. A sign at a licensed dealer’s table stacked with Bushmasters, Sig Sauers, and various other assault weapons advertises: “All AR-15 Type rifles w Comp H Bar are over the counter. No Waiting.” Translation: AR-15 semiautomatics with competition heavy barrels you can take home today. The one model in stock fitting that description is a Windham Weaponry HBC (heavy barrel carbine) semi-automatic rifle manufactured in Maine. It accommodates a 30-round magazine and looks, feels and shoots pretty much the same as its “regulated” counterparts. The reason you’re allowed to purchase this weapon from a licensed dealer and take it home immediately is because it does not appear on the state’s regulated list and has not been designated as a copy under state law. No one—not the dealer or the state police—can explain why this semi-automatic, high magazine capacity, AR-15 rifle does not fall under the regulated seven-day waiting period category. Of the 10 units this dealer brought to the gun show, all sell out within the first three hours at $1999.99 apiece.

Which is not true of the Browning still resting between the knees of the man with the Fu Manchu mustache, sitting where I last saw him on the stool near the vent. Heading for the exit with a 4-ounce bag of Bronco Billy’s Beef Jerky in hand as my only purchase of the afternoon, I pause to examine and heft the Browning. It’s a five-shot semi-automatic 12-gauge, recommended for taking down ducks and geese.

“Is paperwork required?” I ask.

“Nope,” he replies, “not with a private sale. You give me the cash, I give you the 12-gauge, you walk out the door with it.” I don’t need to know his name, he doesn’t need to know mine. That’s how it works in a private sale, whether you’re buying a duck hunting shotgun or a 30-round capacity semi-automatic Windham Weaponry Heavy Barrel Carbine AR-15. No paperwork and no wait.

With just a hint of political urgency and a seller’s anticipation in his voice, the Browning’s owner explains, “That’s the gun show loophole the government wants to close.”