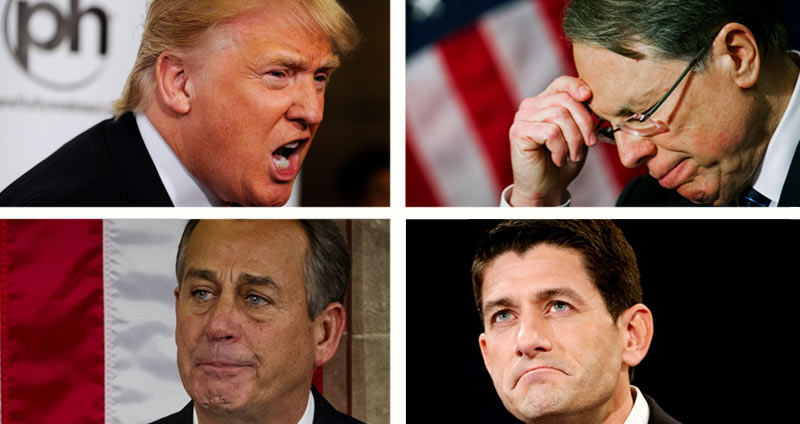 Year of the White-Guy Meltdown

Boehner’s f-bomb, LaPierre’s rant … have the white men in power simply lost it?

It’s a lot of thankless pressure, being expected to manage crisis after crisis and only vouchsafed the chance to achieve fugitive, cathartic release by hurling eighth-grade insults—or rolling around beneath a command-center desk with a dangerously possessive authorized biographer.

In retrospect, the crowning moment of the grinding, pointless theatrics over a deal to avert the “fiscal cliff”—a routine suspension of the Bush-era tax cuts that the major parties’ leaderships and a financially illiterate press corps puffed into a months-long crisis—was likely the earthy aside that House Speaker John Boehner delivered to his Senate counterpart, Majority Leader Harry Reid, a few days ahead of the long-delayed House vote on the spending accord. Politico reports that Boehner turned to Reid outside the Oval Office and supplied—twice over—this terse summation of the GOP’s desires: “Go fuck yourself.” (Reportedly, Boehner was incensed over remarks that Reid had made the previous day, characterizing Boehner's House as a “dictatorship.”)

What this junior-high exchange shows is a far deeper trend of the past year: the complete breakdown of the always-rickety fiction of sage white-guy leadership. In an American political culture that still looks reverently to older sachems of Caucasian privilege, there were ubiquitous signals that this demographic cohort should not be entrusted with serious power or influence of any kind. The whole fiscal cliff miasma was, after all, simply a replay of 2011’s witless congressional showdown over the debt ceiling, when GOP leaders in Congress chose to use a procedural deadline to stage a meaningless protest over federal money that had already been spent.

Other white-guy meltdowns of this order were on lavish, humiliating display as 2012 drew to a close. Just consider National Rifle Association CEO Wayne LaPierre’s response to the horrifying Sandy Hook Elementary School massacre. At a loss to summon humility—let alone accountability—in the face of yet another mass killing by assault gun, LaPierre delivered an unhinged paranoid rant deriding Hollywood films, video games, urban crime (which, by the way, is in historic decline)—anything at all, save the most obvious factor: a gun culture that merchandises cheap weapons explicitly designed to maximize body counts.

LaPierre’s dumbfounding performance came just weeks after the capitol was rocked by the abrupt resignation of CIA Director David Petraeus—arguably the nation’s most fawned-over white-guy Alpha, felled tragically by his apparently ungovernable lust for his authorized biographer, Paula Broadwell. (As D.C.’s pundit corps mused and wailed, by turns, over the tragic loss of this True American Leader, virtually none made note of the far more damning disclosure, courtesy of the Washington Post’s Rajiv Chandrasekaran, that Petraeus spent much of his time on the ground in Afghanistan in the company of neocon power couple Fred and Kimberly Kagan, who are on the payroll of the Project for the New American Century, which laid much of the intellectual groundwork for the disastrous 2003 invasion of Iraq.)

Cast your mind still further back in 2012, and you’re certain to alight on one white guy or another, from Lance Armstrong to Aaron Sorkin to Donald Trump. This is to say nothing, of course, of the legions of error and folly summoned up by those now-comical names, Mitt Romney and Paul Ryan, and their lickspittle admirers, from Dick Morris to Karl Rove.

It’s tempting to advance some grand universal theory of the Great White Man’s decline and fall. But ambitious, all-explanatory theories are themselves leading symptoms of the White Man pathology. So it’s probably best to stick to what the evidence most clearly suggests: Our white men are exhausted. It’s a lot of thankless pressure, being expected to manage crisis after crisis and only vouchsafed the chance to achieve fugitive, cathartic release by hurling eighth-grade insults—or rolling around beneath a command-center desk with a dangerously possessive authorized biographer. Hell, even Mitt Romney didn’t really want to run for president in the first place, according to his son Tagg.

For the good of the country, let’s stop this sad cycle by phasing in a mandatory retirement program for our white male overclass. Let the Romney patriarch rattle around one coastal mansion or another, liberated at last from his Oedipal reveries of ruling the country as one giant Winter Olympiad. And let Trump repair to a high-rise retirement community to berate indifferent healthcare workers about phantom birth certificates. It is, if nothing else, the one sure way to guarantee they don’t eviscerate Social Security.