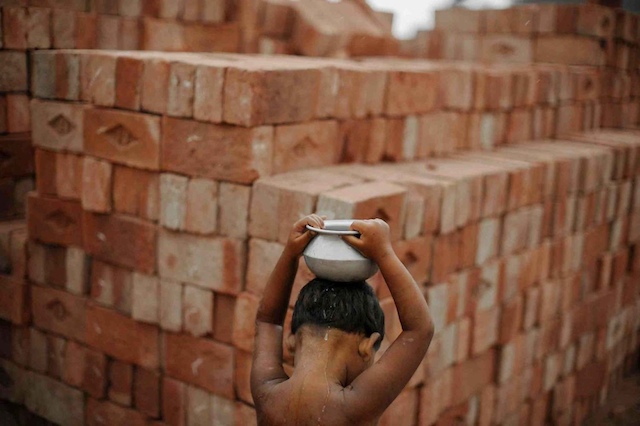 A child on the outskirts of Lahore carries water for brickmaking. Child and adult laborers working in brick kilns in South Asia spend over 70 hours a week performing repetitive motions and are exposed to sun, heat and blowing dust. The ILO estimates that there are more than 200 million children workers worldwide, 5 million of whom are coerced. (Photo courtesy of Getty Images)

Forced and child labor are embedded in the 21st-century economy. What’s Washington doing about it?

In its most recent annual list of goods produced with forced labor and child labor, the Department of Labor detailed 134 goods made in 74 countries. Alarmingly, not one country or good has been removed from this list since the first edition was published in 2009. To the contrary: It keeps growing.

Approximately 150 years after the abolition of American slavery and Russian serfdom, forced labor and its close relative, child labor, are still very much with us. And not in some distant anachronistic place, but embedded in the fabric—sometimes literally—of the 21st-century economy.

The International Labour Organization (ILO), part of the United Nations, estimated that in 2012 nearly 21 million people—3 out of every 1,000—were victims of forced labor, meaning they were “trapped in jobs which they were coerced or deceived into and which they cannot leave.”

These “jobs,” held by bonded laborers, trafficking victims and actual slaves, have made something of a comeback in recent months—at least in terms of media visibility. A government-affiliated U.K. think tank released a report in March calling British authorities’ inattention to modern-day slavery “shocking” and “clueless.” Responding to public outcry, Chinese officials considered abolishing hundreds of forced labor “re-education” camps before ultimately enacting more tepid “reforms.” In the U.S., President Obama issued an executive order in September to strengthen the ban on federal contractors’ and subcontractors’ connections to human trafficking.

But multinational electronics companies’ ties to forced labor have garnered the most attention. News broke last September that Chinese vocational students were coerced into working in factories supplying Hewlett Packard and Apple during peak production periods last year. Teachers allegedly told students they would not graduate if they did not work. In response, both companies said they would increase scrutiny of their manufacturers to ensure all work is voluntary and fairly compensated.

Self-policing is admirable, although not surprising from companies eager to defend the integrity of their global brands. Since the 1990s, when modern-day sweatshops entered public consciousness following bad press around Nike and other garment companies, codes of conduct about supply chain practices have sprung up across Corporate America. But absent bad press and public shaming, companies have little incentive to spend time and money making sure their products are ethically pure, as opposed to merely legal.

One logical solution would be enforcement by countries where multinationals are headquartered—such as the United States. The U.S. Department of Labor says it’s moving in the right direction with a newly released “Toolkit for Responsible Businesses” to reduce forced and child labor. The kit offers “eight steps to an effective social compliance system” that the federal agency says can ensure adherence to corporate codes of conduct.

But just like those codes, the free online toolkit is voluntary.

“It’s a good all-in-one-place resource,” says Brian Campbell, director of Policy and Legal Programs at the International Labor Rights Forum (ILRF). “But … it doesn’t solve the problems that the Department of Labor points out. This doesn’t move the ball forward.”

In fact, the voluntary nature of the toolkit exposes the limitations of the Labor Department’s powers. For example, the federal agency can’t mandate improvements to a company’s supply-chain practices.

And although the DOL publishes a grim annual list of goods produced with child labor or forced labor, it has no power to stop companies from importing those goods; that is the task of the Department of Homeland Security. But doing so is difficult—as illustrated by last year’s uproar over whether forced child labor in Burkina Faso supplied cotton to lingerie retailer Victoria’s Secret. A Bloomberg News investigation uncovered underage cotton pickers, but the company disputed the allegations, and a federal probe went nowhere.

The scope and persistence of forced and child labor around the globe is staggering. A vast army of the oppressed toils away in such diverse workplaces as Uzbek cotton fields, Indian rice mills and African diamond mines.

Of the 21 million victims of forced labor, 4.5 are exploited sexually, 1.5 million are in developed countries (including the United States), about 2 million are trapped in state-run facilities, and 5.5 million are children. Two-thirds of victims—14 million—are forced into private-sector work such as agriculture, construction and manufacturing. Their ultra low-cost labor helps to feed multinationals’ profits.

In its most recent annual list of goods produced with forced labor and child labor, the Department of Labor detailed 134 goods made in 74 countries. It notes that some of the most common commodities on the planet are tied to this exploitation: gold, cotton, sugarcane, coffee and beef, among others. Electronic goods made in China—the origin of most Americans’ gadgets—are listed as produced by both forced labor and child labor.

Alarmingly, not one country or good has been removed from this list since the first edition was published in 2009. To the contrary: It keeps growing.

There is, of course, international condemnation of these practices. Even the U.S. Congress, hardly fond of ratifying UN-backed agreements, has signed the ILO’s conventions calling for the abolition of forced labor and child labor. (It has not yet ratified six others the ILO describes as fundamental to the rights of workers, including one upholding the freedom to unionize.)

The ILO has set itself the highly ambitious goal of abolishing all forced labor by 2015. It aims to do that in part by eliminating forced labor from “global value chains” through partnerships with companies and workers’ groups.

In this vein, comes the Labor Department’s new toolkit, which signals an agency increasingly interested in working directly with companies on this problem.

A toolkit for change, or complacency?

The federal agency notes that the toolkit, created to fulfill a legislative requirement, is the U.S. government’s first-ever guide to help companies remove forced and child labor from their supply chains. As such, it’s an important acknowledgement that some U.S. companies are connected to—or even reliant upon—exploitative contractor practices.

What the toolkit doesn’t focus on, says Campbell of the ILRF, is the central role companies play in creating the conditions that generate forced and child labor.  “It completely avoids any discussion in the wages section of the price policies of companies, which put significant downward pressure on wages,” he says. “Overall, it reflects the business community.”

The toolkit does detail the obvious root causes of forced labor and child labor: Poverty is at the top of the list, with “weak or nonexistent trade unions” not far behind. Better wages and benefits are offered as a way to address poverty, but the passage that follows, addressed to business owners, is mostly laudatory:

Through investment and job creation, you are already contributing to economic growth and better livelihoods for workers in the countries where you source. You are also paying workers at least the minimum wage of the country and complying with all applicable laws in relation to worker compensation. However, in some cases, the minimum wage may not be enough to provide a decent livelihood for workers.

That’s about as critical as the toolkit gets.

“We hope that the toolkit will be a living document,” says Eric Biel, Acting Associate Deputy Undersecretary of the Labor Department’s Bureau of International Labor Affairs (ILAB). “We will look for feedback. … It will be the umbrella under which we hope to engage not just businesses, but civil society and others about corporate supply chain issues.”

Robert McGarrah, Jr., counsel to the AFL-CIO’s Office of Investment, sees the toolkit as an important step forward. The federation of unions tries to leverage its retirement fund investments to improve companies’ supply chains and reduce exposure to child labor.

“We’re constantly looking for examples or resources that can offer improvements on [company] practices, to essentially hold their feet to the fire,” McGarrah says. The AFL-CIO plans on bringing the toolkit to the attention of companies, as well as other investment funds controlled by labor organizations, he adds.

Caleb Shreve, executive director of the nonprofit Global Fairness Initiative (GFI), which supports more equitable economic development for the working poor, lauds the toolkit. “Within its mandate, I think the Department of Labor has taken companies to task on these issues. The days of [companies] working in a supply-chain vacuum seem to be slowly ending. The U.S. government, and increasingly the states, are playing a role in moving this process.”

Campbell, however, thinks it will take a lot more than a voluntary toolkit to change corporate behavior. “The Department of Labor should be telling companies not to do this, not just saying ‘It’s a good idea not to do this,’” he says.

A relatively easy way to drive change, he suggests, would be for the federal government—the world’s largest purchaser of goods and services—to aggressively leverage government purchasing power to expose and improve corporate supply chain practices. Activists cheered a September 2012 White House executive order requiring companies in industries associated with trafficking to adopt safeguards and guidance to avoid it.

The order still hasn’t been implemented; the government has one year to do so. Campbell hopes that the DOL will “use the authority granted in the executive order” to require federal contractors to submit reports detailing their supply chain. But the Labor Department's Biel says that requiring such reports is beyond the scope of the executive order.

Aside from wanting more aggressive enforcement of existing laws and more transparent procurement practices, Campbell sees a fundamental obstacle to systemic supply chain change: Both companies and the U.S. government view foreign governments, not multinationals, as the main force that can curtail forced labor and child labor. (The toolkit states that the “the responsibility for addressing root causes is that of governments.”)

Biel emphasizes that the department has no authority to demand that corporations improve foreign factory conditions, so it focuses on pushing other governments to enact and enforce laws and regulations.

To that end, corporations and the U.S. government give money to support foreign programs that both advocate for better worker protections and directly intervene to rescue forced and child laborers. The Labor Department is currently spending $200 million on anti-child labor projects in 50 countries. It says its projects have rescued 1.5 million children from exploitative labor since 1995.

However, the DOL is up against a global race to the bottom. Foreign governments have an incentive to loosen business regulations and labor standards in order to attract multinationals.

In a better world, Campbell argues, the companies that create and sustain dirty supply chains would be held primarily responsible for cleaning them up. “The root cause of forced labor and child labor, to a large degree, is poverty. Companies are going to say, we’re not responsible for the world’s poverty. My response is: You are responsible for the people your business touches.”