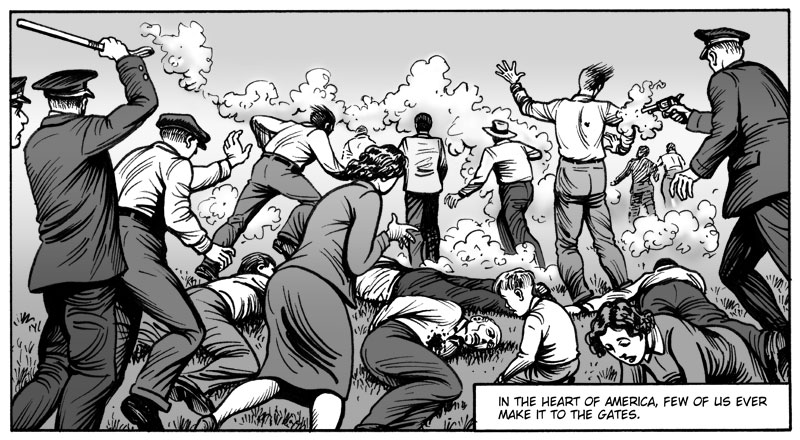 A panel from James Vance and Dan E. Burr's On the Ropes, the sequel to Kings in Disguise. (Reprinted with permission of W.W. Norton & Company.)

A brilliant new graphic novel takes a nostalgia-free trip to the 1930s.

No heroic proletarians or Marxist savants are to be found in these pages.

The recognition that comic art is, indeed, “art” has dawned so recently upon the U.S. literary world that, aside from Art Spiegelman’s Maus, graphic novels that should be revered as classics are as good as forgotten. Thus most Americans have not heard of James Vance and Dan E. Burr’s Kings in Disguise, published in 1988 and winner of numerous industry awards, even though it was reprinted in 2006 with a brilliant introduction by alt comics giant (and anarchist) Alan Moore, of V for Vendetta. And now comes Vance and Burr’s sequel, On the Ropes.

Kings in Disguise told the story of residents of Depression-era hobo camps and one 12-year-old boy in particular, Manfred Bloch (who calls himself “Fred”). Perhaps only the late Jack E. Jackson’s series of graphic novels (under the pen name Jaxon) on the development of Texas put a chunk of American history under the microscope with such care in narrative and art. None before Kings had depicted brutal class conflict, notably a hunger march in 1932 in Dearborn, Mich., accompanied by the mass singing of “The Internationale” and marchers beaten savagely by the cops.

On the Ropes picks up Fred at age 17 as he is politicized by further experience in the college of hard knocks. Our lad has a job in a WPA-sponsored circus, assisting an escape artist whose schtick is to hang himself from the neck while manacled before saving himself at the last second. The escape artist is a drunk, but not entirely without moral character. He does not, for instance, rat out Fred for joining the “Workers Brigade,” an allusion to the Popular Front-era Workers Alliance that merged Socialist and Communist support for the unemployed. By the time of the events depicted in On the Ropes, the Alliance (and thus the “Brigade”) was dominated by the Communist Party and its sympathizers.

What’s fascinating about On the Ropes is its densely complex take on political interactions, working-class experience and the Left. Fred is recruited by the middle-class cadres of the Workers Brigade to help organize and promote the new Congress of Industrial Organizations (CIO) and the sit-down strike movement. But no heroic proletarians or Marxist savants are to be found in these pages. Fred’s own politics are largely circumscribed by solidarity with the unemployed; we get no idea of his views about anything outside his immediate experience, though he takes offense when a co-worker jokingly calls him Trotsky. A journalist on the WPA guidebook project mocks Fred for his idealistic expectations of great social changes ahead, but she offers to help him in his aspiration to become a writer. The Workers Brigade boosts his confidence by treating him as an important contact between the Left and the unemployed, but they give him falsely optimistic expectations about being able to escape his poverty. They also fail to grasp the dangers posed by company thugs, as CIO organizing revs up and leads to the Memorial Day Massacre of steelworkers and their sympathizers in Chicago.

Fred’s choices—to work on a novel, throw himself into organizing or spend precious time with a potential girlfriend—are never easy or satisfying, and are nearly always touched by tragedy. They are, in other words, perfectly normal for many Americans at the time. Around Fred we find, for instance, the hard-luck guy who recalls how he “earned my spot in hell” by taking a job as a strikebreaker and beating up miners with shovels and clubs. That strikebreaker becomes the escape artist, working and drinking his way toward a personal doom that, in his mind, he has earned. Is this perhaps too melodramatic? No more so than, say, one of the losers in Nelson Algren’s Chicago novels. The etched tragedy is set alongside another kind of tragedy, the limits of kindly middle-class people (including the Reds) who want to help but can’t really do much for folks like Fred at the very margins of Depression life.

The story line is complex, sometimes hard to follow, but never dull. Fred leads a terribly sad life, its treatment here so unsullied by sentimentalism that we cannot quite help wishing for some treacle. Better, though, to see the grip of the Depression and its withering effects upon ordinary Joes and Janes as if we had lived the era ourselves.

In his introduction to the 2006 edition of Kings in Disguise, Alan Moore noted that Burr’s drawing was as “masterful and unassuming” as the work of the handful of artists who illustrated American Splendor and other Harvey Pekar scripts, and this strikes a particular chord with me, an editorial collaborator with Pekar right up to his death in 2010. The art of both Kings and On the Ropes is so deeply embedded in the stories that they flow visually with the quality of everyday life. The sparely drawn panels remain realistic even when the events are grotesque, depicting human tragedies that are hard to look at, not only because they are personal, but because they result from the deep wounds of class. Readers should expect no happy endings here.

The Coronavirus Crisis Is Disaster Capitalism In Action. Here’s How the Left Can Respond.