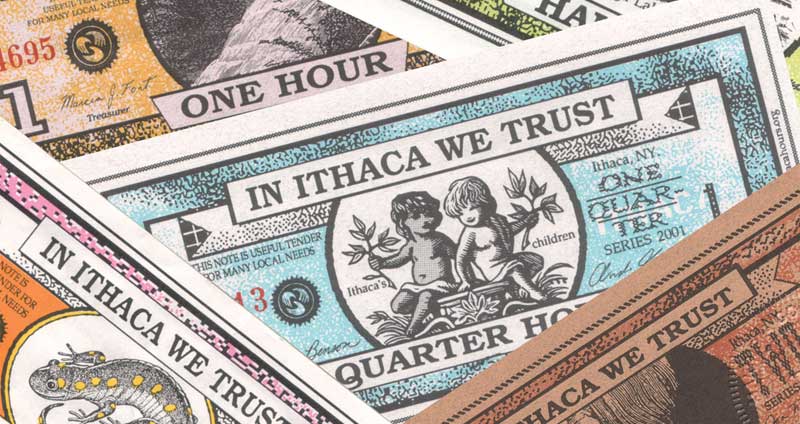 The first Ithaca Hour was spent on a samosa in 1991.

Not Your Grandma’s Wooden Nickel

Not only can businesses pay their city taxes in Bristol Pounds, but the mayor has opted to take his full salary in the local currency.

The American idiom “Don’t take any wooden nickels!” predates the 1930s, but that era’s bank crises did lead to the actual use of wooden currency. When local banks failed or were inaccessible in the Pacific Northwest, some merchants and towns issued wooden money as a stopgap. The wooden nickels circulated as IOUs until the banks became accessible.

The principles behind the wooden nickel are still at work in today’s alternative currency movement. Bernard Lietaer and Jacqui Dunne, authors of Rethinking Money: How New Currencies Turn Scarcity into Prosperity, argue that the more than 4,000 alternative and complementary currencies in circulation worldwide have the power to help communities solve their monetary woes. The currencies—minted as a complement to (rather than a replacement for) money backed by national governments and usually administered by an independent local agency—not only provide local liquidity in the event of a cash shortage, but can also boost local economies.

Only a fraction of the money spent in big-box stores or fast-food franchises stays local, the bulk is siphoned off to corporate coffers or family fortunes. (For example, the members of the Walton family, owners of Wal-Mart, have enriched themselves to the tune of $115 billion.) Meanwhile, numerous case studies—in New Orleans, West Michigan and Portland, Maine, to name a few—confirm that money spent at local retailers, rather than big chains, is twice as likely to recirculate locally. And since locally issued money can only be spent locally, it encourages this recirculation.

Enter the Ithaca Hour, the first local currency created in the U.S. after World War II and the oldest currently in circulation. It was minted in the mini-recession of 1990-1991. Talking about why he created the Hour system, its founder, Paul Glover, says that “Everyone had more time than money. People had plenty of skills that Wall Street wouldn’t hire.” So he decided to write a book on the subject, Hometown Money: How to Enrich Your Community with Local Currency, which became the blueprint for the Hour.

Here’s how it works: Hours are administered by the Circulation Committee of Ithaca Hours, governed by a board of directors. The group claims $120,000 of Hours in circulation, with more than thousands of participants including 500 businesses and a credit union that accepts them for mortgage payments. While anyone can spend or accept Hours, those who sign up for an Hours membership can vote for or run for board seats, and apply for interest-free loans (in Hours, of course). The Hour resembles the U.S. dollar in size and shape, but is colorfully printed and features symbols rather than statesmen, ranging from local heroes to a spotted salamander. The unit “Hour” is meant as a reminder that money represents time and labor. One Hour is equal to $10, the average hourly wage in Tompkins County when the currency was created. Newcomers to the Hours system can go to special banks to trade U.S. dollars  for Hours (but not vice versa), while member merchants can deposit Hours as cash or use them  in turn  to pay wages, buy products or give change to customers. Since Hours are real currency, the transactions are still subject to local, state and federal taxes, but the exchange boosts local productivity.

The Hour has inspired imitators across the nation: Anacostia Hours in eastern Maryland and Washington, D.C., BNotes in Baltimore, Trade Dollars in Arkansas. The Hour itself, however, has faded from use since its heyday in the ’90s. Ithaca Times writer Dana Khromov attributes the decline to the rise of electronic banking and Glover’s move from Ithaca to Philadelphia. With cash transactions growing less common, and without Glover to troubleshoot, some businesses had more Hours than they could spend, freezing the currency. Ithaca’s Greenstar Co-op ended up taking a loss for its surplus Hours, offering them to its customers at a discounted rate just to help revive circulation.

The BerkShares, a currency launched in the Berkshire region of Massachusetts in 2006, learned from the travails of the Hours, according to BerkShares co-founder Susan Witt. BerkShares Inc., the central BerkShares authority, recognized a freeze-up as a potential pitfall to its local currency, and decided to make banking one of its primary features. All 13 branches of the five local banks have signed on as exchanges between dollars and BerkShares, andvice versa. If merchants find they have excess BerkShares, they can simply go to the bank and exchange them for dollars. BerkShares trade at a 5 percent exchange rate, meaning that $95 can be exchanged for 100 BerkShares, backed by dollars that remain on deposit. Those BerkShares then circulate within the community at full value, with the built-in incentive to keep the money local and circulating (since trading them back to dollars results in a 5 percent loss). More than 400 businesses accept BerkShares, and more than 2.7 million have circulated through the region.

The prospect that local money may help protect against the oscillations of the global economy has led some Transition Towns to enthusiastically embrace local currency efforts. The Bristol Pound, launched Bristol, England, in September 2012 with the help of Transition Network, offers one of the most cutting-edge models. Backed by the Bristol City Council and the Bristol Credit Union, participants can take advantage of online banking and a mobile app to help navigate where to spend their Pounds. And not only can businesses pay their city taxes in Bristol Pounds, but the mayor has opted to take his full salary in the currency.

If alternative currencies still sound strange, Lietaer and Dunne quote Edgar Kampers, the director of a non-profit organization that supports a currency called Qoin, to drive home the point of what money actually is: “[F]or me, currency is information between a buyer and a seller. … I buy a sweater. We agree that it’s worth 20 units of whatever. The sweater is the thing with the value. … Money is not valuable at all, but money allows you to buy things, which are valuable.” In other words, local currencies recognize that money is an invention, which can change and be reconstructed to meet the needs of the community it serves.

Julia Pergolini, a 2009 graduate of Ithaca College, co-owns and operates Waffle Frolic in Ithaca, N.Y. She is a former Ms. magazine intern.