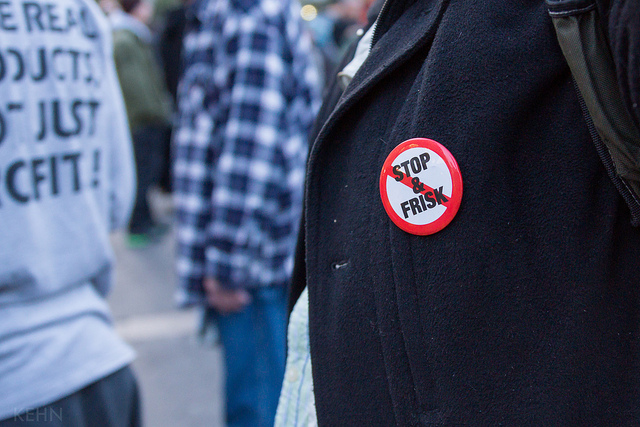 A grassroots movement has been building for years to end stop-and-frisk. (Josh Kehn / Flickr / Creative Commons).

A Verdict on Racial Profiling?

A judge has ruled stop-and-frisk unconstitutional and racist. But will it stop?

A federal judge‘s ruling has finally affirmed what activists in New York City have been saying for years: The New York City Police Department (NYPD) policy of “stop-and-frisk” is legalized racial profiling and harassment. The long-awaited decision came in response to a lawsuit by eight plaintiffs challenging the constitutionality of stop-and-frisk. But more fundamentally, it was the product of an activist movement that has for years highlighted the racist implications of this policy. The longstanding campaign to stop “stop-and-frisk” gained new momentum in the aftermath of high profile cases of police brutality and murder.

In February of 2012, unarmed African American teenager Ramarley Graham was gunned down in his bathroom by NYPD officers claiming they saw a gun in the waistband of his pants. This case helped to mobilize thousands of New Yorkers to take to the streets more than a year ago to oppose the policy. The murder of Trayvon Martin just days after Ramarley's death sparked a national discussion about the perils of racial profiling and the impact on young African-American men. All of this contributed to an atmosphere where stop-and-frisk could no longer go unchallenged.

According to a report by the Center for Constitutional Rights, between 2004 and 2012, more than 4 million people were stopped, and in less than 6 percent of those stops was an arrest made. More than 80 percent of those 4 million people were African American or Latino, raising the cry from those communities that stop-and-frisk was officially sanctioned racial profiling.

In her verdict Monday, U.S. District Judge Shira Scheindlin concurred, zeroing in on the racial discrimination at the core of the stop-and-frisk policy. She wrote, “Blacks and Hispanics who would not have been stopped if they were white… Blacks are likely targeted for stops based on a lesser degree of objectively founded suspicion than whites…[and Blacks and Latinos] were more likely to be subjected to the use of force than whites, despite the fact that whites are more likely to be found with weapons or contraband.”

Yet even though the verdict left no question that the policy consisted of racially motivated stops, the judge did not halt the practice. Instead, she ruled that the NYPD will be subjected to federal oversight and must institute reforms such as using body cameras to monitor of officers' engagements with the general public.

Given the attitudes of the police department, city leaders and the federal government, these measures are likely to be insufficient. For one, neither New York City mayor and billionaire Michael Bloomberg nor his Police Commissioner Ray Kelly can be trusted to reform a policy that they continue to champion. The overwhelming evidence of racial profiling at the heart of stop-and-frisk did not stop Bloomberg and Kelly from angrily denouncing the ruling and declaring the city’s intent to appeal the decision. In doing so, they continued to deny the problem.

Ray Kelly claimed that charges of racial profiling were “recklessly untrue.” Yet evidence at the trial suggested that he himself thought stop-and-frisk should target communities of color. New York state Sen. Eric Adams testified that he heard Kelly say that stop-and-frisk should “instill fear in them, every time they leave their home, [that] they could be stopped by the police.” According to Adams, the “them” were Blacks and Latinos.

Kelly’s dismissal also ignores an avalanche of evidence from police themselves that race was a central factor. A high-ranking officer implied during the trial that stop-and-frisk tactics were directed at young Black and Latino men, testifying, “Well, who is doing those shootings? Well, it’s young men of color in their late teens, early 20s.”

To be sure, Judge Scheindlin has required that a federal monitor be charged with overseeing the NYPD’s compliance with her order, but why would the federal government be trusted to vigorously regulate and monitor the practices of the NYPD? Last July, Obama shocked many activists when he lavishly praised Ray Kelly as a potential head of Homeland Security. Obama’s fawning descriptions of Ray Kelly as “outstanding” and “very well qualified” raise questions about the ability or willingness of the Department of Justice to rein in the NYPD’s racist practices.

But there is a larger problem. Much of police work in the United States is based on racial profiling, whether police departments refer to it as a policy or whether it is simply everyday practice. For example, when the New York Post and New York Daily News quote hysterical claims that New York City will turn into Chicago without stop-and-frisk, they are ignoring that the Chicago Police Department already engages in stop-and-frisk tactics. In Chicago the police refer to them as “Investigatory Street Stops,” during which the police may stop any individual they believe “is committing, is about to commit, or has committed a crime.” http://directives.chicagopolice.org/directives/data/a7a57be2-12a864e6-91c12-a864-e985efd125ff521f.html This policy also allows the police to enter the personal data of whomever they have stopped into a database for up to one year regardless of whether or not the person stopped committed a crime or was a arrested. As Chicago Police Superintendent Garry McCarthy put it, “Stop-and-frisk is a tactic that every department in the country uses because we have to stop people when we’re going to arrest them. We have to frisk them if we’re in fear of a weapon.” But in Chicago, just as in New York, the pretext for stops are just as vague and open-ended.

As cities have becoming increasingly inhospitable to poor and working class Black and Latino communities, the police have been used to reinforce the boundary between distressed neighborhoods and the gentrified and economically vibrant areas where they are perceived not to belong. It was no coincidence that Judge Scheindlin commented in her ruling that one of the effects of stop-and-frisk to make Blacks and Latinos “feel unwelcome in some parts of the city.”

In many of these economically marginalized communities, public officials have come to rely on aggressive policing as the only public policy response to the social crises that have erupted as a result of chronic unemployment and growing poverty. Meanwhile, the mass closing of public schools, public clinics and hospitals, along with a range of other budget cuts that have reduced the public sector to a hollow shadow of itself, are undoing the very public programs that were intended to mitigate or undo the effects of poverty and, presumably, the crime that often comes along with it. Instead, in cities like Chicago, more policing has become the alternative. Despite falling crime statistics across the nation, police forces have become more militarized and aggressive and “proactive policing”—a term Ray Kelly uses for stop-and-frisk—is a central component of this. http://www.npr.org/2012/01/03/144627627/falling-crime-rates-challenge-long-held-beliefs

And because the communities disproportionately impacted by joblessness and poverty are communities of color, they are targeted by the police.  This targeting is evidenced, in part, by overwhelmingly disproportionate arrests and imprisonment for drug use.  Even though African Americans account for 12 percent of drug users, they account for 38 percent of drug arrests and account for 59 percent of persons serving time in state prison for drug offenses.  http://www.naacp.org/pages/criminal-justice-fact-sheet

We should applaud the court’s recognition that the NYPD’s policing targets Blacks and Latinos unfairly, but we should not be under the illusion that this insight (long obvious to the communities suffering from racialized policing) will somehow end the routine ways in which police target communities of color.