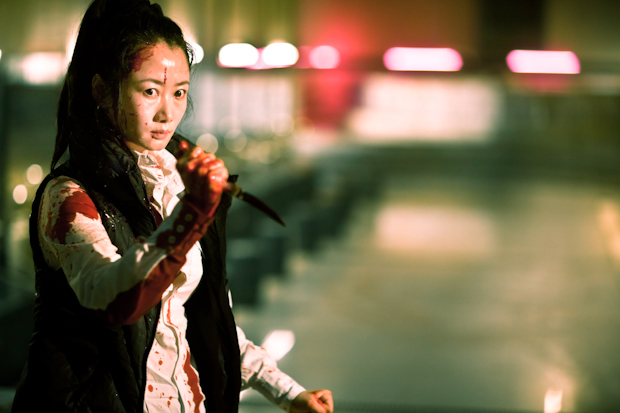 No happy ending: Zhao Tao plays a sauna worker abused by a patron in A Touch of Sin.

Jia Zhangke’s A Touch of Sin is a grotesque portrayal of modern-day China’s struggle with corruption.

What Jia is looking at is painfully clear: a scarred nation emerging into industrial prominence and turning its citizenry into starving dogs.

Despite mainland China’s booming industry and cockeyed embrace of late capitalism, its filmmaking is far from exploding. That is, except for the sly and brilliant presence of Jia Zhangke, who, since the epic Platform (2000), has prevailed as the preeminent Chinese director. As the vets of the acclaimed “Fifth Generation” wave that emerged in the ’90s—Zhang Yimou, Chen Kaige, Tian Zhuangzhuang—continue to produce increasingly bland historical films for the international market, Jia, mixing documentary and fiction, uses the monumental manmade landscapes of his homeland, from the bizarre tourist trap Beijing World Park to the devastation wrought by the Three Gorges Dam, as vast metaphors for political folly.

It cannot be an easy road. Jia is quietly, subversively critical of Chinese society past and present, and the aesthetic subterfuge of his movies somehow snows the authorities. His films are not always allowed into theaters but always do brisk business on pirated DVDs. Perhaps his characteristic style—unemphatic long takes that acquire an odd personality as they persist, using time itself as a satiric weapon—confuses the non-cinephile Chinese censors. All the more shocking, then, to see Jia’s new film A Touch of Sin bust out of its art-film ghetto with guns blazing and blood spray hitting the ceiling. If this strange, graphic social-portrait-cumthriller had not been molested by the Chinese government on its way to international festivals this year, it might be the clearest sign yet of that nation’s fitful Westernization finally coming to terms with itself.

A Jia film by way of Quentin Tarantino and Guillermo Arriaga, figuratively speaking, A Touch of Sin opens with empty highway violence: Three muggers with hatchets try to intercept a lone motorcyclist, only to have him take out a pistol and gun them all down. The sequence is assembled with very un-Jialike fast cuts and tight action, and for a moment you don’t know what kind of movie you’re watching—a feeling that does not disappear.

As the gunman zooms by a crashed truck and its spilled cargo of tomatoes, he passes another cyclist in a long Army coat: Dahai (Wu Jiang), a loudmouth troublemaker from the nearby mining village who has helplessly dedicated himself to protesting the embezzlement of the privatized mines’ collectivized wealth by the town’s magistrate. Beaten, sidelined and humiliated, Dahai eventually loads his shotgun and goes hunting for sons of bitches, embarking on a gore-splattered massacre that Jia pulled from the news headlines.

All four of A Touch of Sin’s interwoven stories are lifted from current events. They limn the moment in the lives of average, put-upon Chinese citizens when the pressure builds to a crisis and violence results. As high-level corruption grows in China, so too does violent crime, and Jia was moved to make the film by the heretofore unseen levels of impulse murder, vengeance execution, suicides and assaults of all kinds.

Jia is one of those moviemakers who can tell a story in a single shot, and his eloquence is hard at work here, particularly in the third story, focusing on a struggling and mortified sauna-brothel receptionist (Zhao Tao, Jia’s wife) who’s tried not only by her married lover’s reluctance to commit but also by brutal violence from his spouse, and then, in a tipping-point affront, an abusive sauna client, who bats her around demanding a “massage” and sends her into a knifewielding fit of retribution.

Jia’s English-language title explicitly nods toward King Hu’s famous wuxia pian (martial-arts) epic A Touch of Zen (1970), and the startling employ of bloodletting and gunplay in the new film, given how radically different it is from Jia’s other films, comes bearing a sense of irony. Jia is dialoguing with Chinese culture as well as modern Chinese society, and in interviews has pointed out how wuxia pian has always been political, structured around the individual battling power and oppression. But warrior heroism has no place in the contemporary landscape, and Jia’s steady camera and iconic compositions spare us very little. What Jia is looking at is painfully clear: a scarred nation emerging into industrial prominence and turning its citizenry into starving dogs.