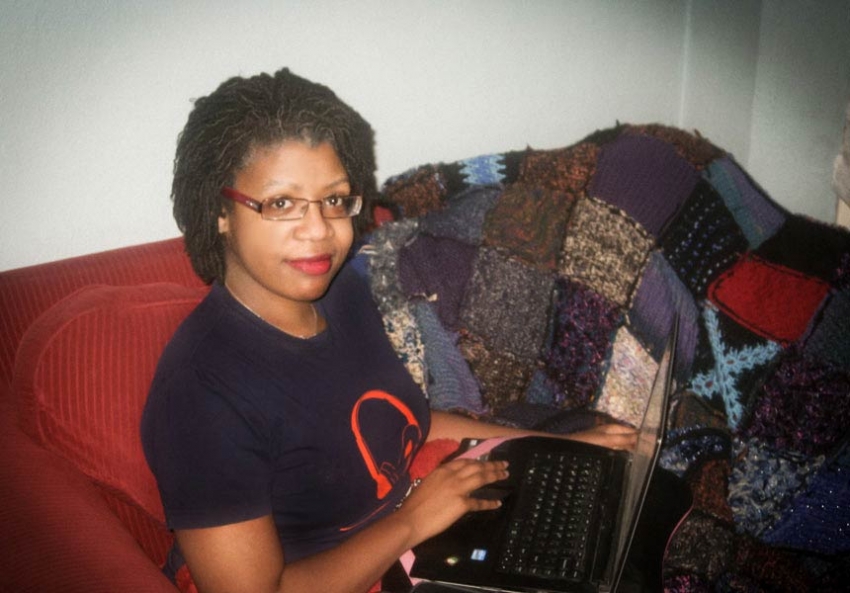 The creator of #solidarityisforwhitewomen talks race and online feminism.

A lot of times when I speak about things that have happened to me, there’s a significant chunk of people who are like, 'Oh, I can connect to you,' and then 'you' become the face of 'them,' and then 'they' become people.

For the last decade, Chicago writer Mikki Kendall has juggled a career in public service with corunning the popular blog The Angry Black Woman and writing about race and activism for Salon, the Guardian and The Hairpin, to name a few. More recently, Kendall co-created Hood Feminism, a blog aimed at giving, as its introductory post states, “women on the margins … the space to tell their own stories.” Kendall frequently critiques “digital feminism,” which began in the early-to-mid 2000s with the emergence of blogs like Feministing and Feministe that focused on creating online communities for young feminists to trade ideas and connect with other activists. Though the blogs ostensibly began as a response to the elitism of older feminists who operated in insular, generally academic circles, Kendall argues that digital feminists, in turn, have engaged in exclusionary tactics by disproportionately concentrating on issues important to white, privileged women.

In August, Kendall brought these criticisms to the forefront of social media when she created the Twitter hashtag #solidarityisforwhitewomen to demonstrate her frustration with what she saw as mainstream digital feminists’ refusal to advocate for women of color in the face of oppression. Women of color jumped at the opportunity to discuss the double standards they had faced from white feminists, both in online and offline communities, and over the course of a day or two, the hashtag became one of the most popular topics on Twitter in the United States, with users contributing from all over the world.

Five months later, the hashtag is still being used as fodder for panel discussions and invoked to condemn racism and classism in the progressive movement. In These Times sat down with Kendall to talk about the challenges she’s faced as an activist and how feminists can best combat oppression from within their own ranks.

What inspired you to start #solidarityisforwhitewomen?

A lot of what happened with the hashtag was a result of frustration. The level playing field of the Internet means white feminists can’t ignore us—but they don’t know what to do with us. We’re eight years deep into this “digital feminism” concept, and people who’ve been around from the beginning see white feminists stand up and say they invented feminism, and then present stock photos of black women—even though they work with black women—in presentations about feminism. Some people think that #solidarityisforwhitewomen is about jealousy of the mainstream feminist leaders who tend to dominate the conversation, but the reality is that I’ve heard white feminists talk about me in the most othering ways. When the conservatives are less offensive than feminists, we have a problem. Feminists are supposed to be on our side, and we can’t trust them either.

Given all this, do you think the term “feminism” is an accurate term to encompass an anti-racist movement?

I’m leaning more and more on the “hood feminist” concept. My cultural contexts are not yours. There are feminists everywhere. The label is not as important as keeping in mind that these women have goals. They don’t need to be dreaming the dreams that white feminist leaders are dreaming.

When you’re discussing popular feminist issues, you have to look at more than, “Why don’t those people do what I do?” “Those people” are poor. “Those people” may be less educated. The choices that they make are different from the choices that you make. For example, there’s a whole huge conversation about how black women don’t breastfeed. What nobody talks about is that black women are more likely to be poor. Breastfeeding is an exercise best undertaken when you have resources. If you are working, unless you have a job that has some snazzy progressive thing like a breastfeeding room, you can’t pump during the day. And good pumps aren’t cheap! There are all these steps to breastfeeding that for a working mother are complicated.

You got a lot of publicity for starting #solidarityisforwhitewomen, but this isn’t your first experience with online activism. In 2011, your piece for Salon, “Abortion Saved My Life,” drew fire when anti-abortion crusader Jill Stanek accused you of lying. Because you used your own story, the attacks became very personal—what made you decide to use a personal narrative to make a broader point?

Girls like me aren’t real. We’re a problem, we’re a project, we’re whatever, but we’re not people. You see all this talk about the “problem” of single black mothers, or the “problem” with poverty, but there are no people in that conversation. A lot of times when I speak about things that have happened to me, there’s a significant chunk of people who are like, “Oh, I can connect to you,” and then “you” become the face of “them,” and then “they” become people.

Why are people uncomfortable with the realization that the anonymous figure they’re trying to demonize—single mothers who get abortions, for example, or women on welfare who have many children—is a real person?

It’s racism. Flat out. It used to be that welfare was only for white people, during the New Deal. When that narrative changed in the ’70s, it became about these black women who were hiding in their houses who weren’t going to work. The purpose of welfare was originally to help women feed their children. And then black people started to get it, and even though black people only make up about 30 percent of food-stamp recipients, it somehow became about that mythical black woman in the grocery store, with the designer clothes, with the done hair and the manicured nails and whatever.

The “hair and nails” thing? If you’re a woman, chances are pretty good that you know how to do one or the other, if not both. Nail polish is $1.89. With hair, you can buy a box of dye, you can stand in your bathroom, and you can look professional. Those parts of the economy don’t get talked about, because people are talking about poor people, they’re not talking to poor people.

The reality is that many welfare recipients are veterans. They’re retired vets, or spouses of vets, or active duty vets, and nobody wants to admit that we’re failing our active duty.

What about politicians who go on “SNAP challenges,” trying to live on food stamps to show the dangers of cutting supplementary benefits?

It’s complete and total bullshit. You’re on SNAP benefits for a week, but you’re not moving out of your house, you’re not giving up the spices that are in your cabinet, you’re not having to worry about the heat or the power you’re using or the fact that your poverty is never-ending. You’re not having to worry about going to the SNAP office for eight hours, two or three times in a row, before you actually get benefits. You’re not standing in line at the grocery store having the cashier judge you for buying fucking blueberries because blueberries weren’t on sale that week. Food-stamp challenges don’t teach you what it’s like to be poor. Food-stamp challenges teach you what it’s like to be hungry for a hot second.

You’ve written before about how digital feminism’s discussions of motherhood leave out the broader experiences of poor parents. How can the progressive movement better address the needs of poor people?

In Chicago, the subsidy that low-income workers receive for licensed day care for kids 3 and older is around $30 a day. That’s just not enough. And care workers aren’t making much because the people who pay them aren’t making much. I don’t think anyone is really talking about what it really takes to survive—how many hours a day it takes to be devoted to household things. Those things take time. If you work two jobs, that’s your whole day.

How are Twitter and other social media changing feminism?

There’s crazy money to be made in media, in consulting and in speaking. Everyone wants to be an “expert.” And it’s much easier to get paid for being an “expert” on people who can’t speak for themselves. But Twitter makes it impossible to ignore the voices of the people you’re talking about. You can’t be an expert on those people when those people are at the table with you.

Kathleen Jercich is an assistant editor at In These Times. Her work has appeared in Sacramento News and Review, BUST Magazine and on The Rumpus and Bitch Media blogs.