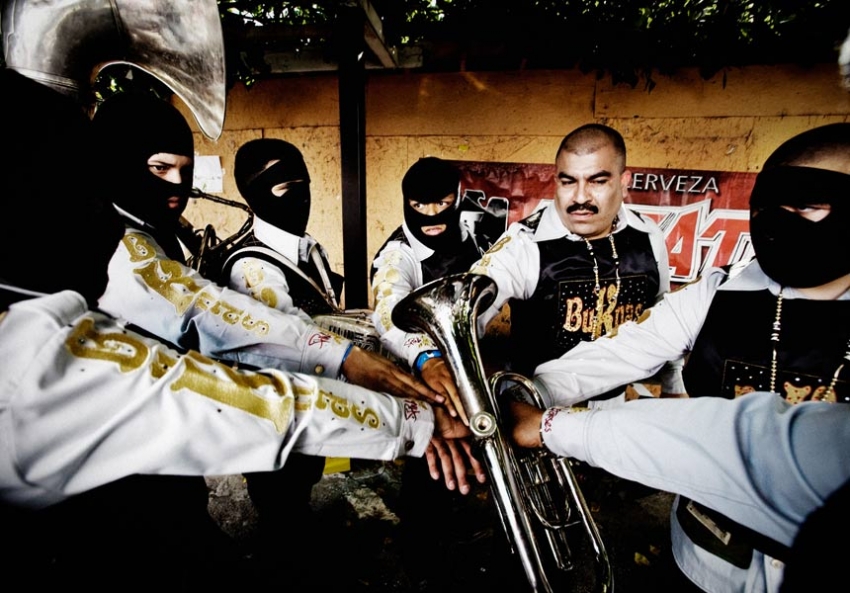 A scene from Narco Cultura, a new documentary by Shaul Schwarz (Photo courtesy of Parts and Labor)

A new documentary on narcocorrido, the gangsta rap that glorifies the Mexican drug trade.

Taking on the lacerating trauma and mutilative torque that the brutal drug war between narcotraficantes and the Mexican government has inflicted on the country in the last seven years, Shaul Schwarz’s film Narco Cultura first figure-checks the phenomenon’s mind-boggling scale. Total casualties are conservatively estimated around 60,000, though many sources put the number at well over 100,000, or more than 40 homicides a day. Many of the severed heads and torsos and altogether vanished bodies belong to rival drug thugs, but plenty have been journalists, cops, politicians and civilians, a stupefying fallout from ex-President Felipe Calderón’s military intervention against the cartels, begun in 2006, which ended up producing retaliatory criminal carnage on a scale unseen anywhere, ever, in North America.

And it’s still happening, a year after Calderón’s reign ended. The larger point to Schwarz’s film is that narco culture is so embedded in everyday Mexican life that it’s become its own pop mythology.

Surveying Ciudad Juárez and contemplating its schizo siblinghood with over-the-border El Paso, the movie’s attention is split between a typical narco-war Everyman—crime-scene investigator Richi Soto—and a new kind of freak manifestation, narcocorrido singer Edgar Quintero. Soto’s job is grim, selfless and bureacratically maddening, dissecting murder scenes day in and day out, bagging dismembered bodies and filing reports no one will act on. (Ninety-seven percent of the 10,000-plus murders in Juárez since 2008 have gone uninvestigated, according to Sandra Rodriguez, a Mexican journalist.) Soto himself is a shy bachelor, quite naturally angling to take his girlfriend north of the border, where he might get a job that doesn’t put him on an assassination list.

He’s a necessary counterweight to the onslaught of Mexican pop life represented by Quintero, an L.A.-based musician and a rising star in the nascent narcocorrido wave, a bastardization of the traditional corrido—a narrative ballad set to a Mexican polka beat—mated with gangsta-rap sensibilities, outfitted with lyrics extolling the cartel-gangster’s perspective on money, murder and bling. Quintero, like others in the subindustry, isn’t just singing about the cartel—he’s its paid hagiographer. We see Quintero on the phone running lyrics by cartel outlaws; later, he plays a test mix for an SUV full of narcotraficantes, and receives a stack of American Benjamins for his efforts. His lovely wife just shrugs, and the crowds at narcocorrido concerts enthusiastically sing along to tales of beheading and counting American dollars, while onstage Quintero and his ilk heft fake bazookas in one hand and microphones in the other.

Schwarz goes for the throat, cutting inside of a few minutes between a scene of Soto helplessly bagging up the body of a bullet-torn boy of about 12 and a boisterous crowd of narcocorrido fans belting out ballads of bloodletting.

Of course, the ethical disconnect here shouldn’t seem very foreign—Mexico’s narco cultura, like self-glorifying criminal cultures in Brazil, Indonesia, Somalia and elsewhere, seems to model itself on American gangsta life and its outlaw drug industry, down to the clothes, the slang, the music videos and the clichés.

Love the gun-crazy braggadocio legacy of American hip-hop though you may, you have to face the way the paradigm has infected the world’s poorest corners, juicing their mobster cultures with hip style and rabid articulations of free-market rationales.

This has a double-bladed irony to it, since Mexico’s dope industry is almost entirely dependent upon the appetite of America’s drug users. However you come at it, it seems that the perpetual slaughter south of the border is an American export product, paid for and fine-tuned by American self-indulgence.

The surreality on hand in Schwarz’s film might just peak in a massive Juárez cemetery, a large portion of which is reserved for cartel members, who build garish, mini-McMansion tombs for each other, several stories high and equipped with bulletproof glass. Someone refers to it as a “city,” where the houses of the dead are lavish beyond the means of the living. Rising like a Disney park out of the desert, and surrounded by towns and precincts awash with profiteering blood, it’s as potent a metaphor for the cannibal equations of free-market capitalism as you’ll find anywhere.