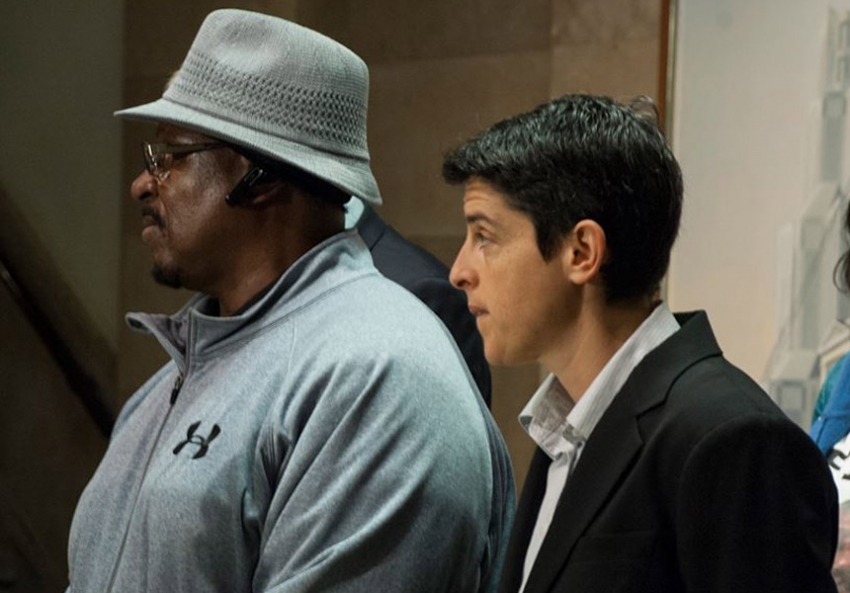 Anthony Holmes (L) is just one of the many survivors seeking justice for alleged torture and wrongful imprisonment by Chicago police. (People's Law Office)

Rahm Emanuel needs to put his money where his mouth is.

For years, the anti-torture movement had called for an apology from the city as part of a comprehensive set of remedies that would provide financial compensation, health care, educational opportunities and job training for torture survivors. And, they said, Emanuel’s seemingly impromptu 'sorry' was nowhere near sufficient.

In May of 1973, then-Chicago Police Detective Jon Burge allegedly suffocated and electric-shocked Anthony Holmes until Holmes confessed to a murder he says he didn’t commit. Holmes then spent the next 30 years in prison. In 2010, after his release, he testified in the government’s successful prosecution of Burge for perjury and obstruction of justice.

While Burge serves his 4 1/2-year sentence at the Federal Correctional Complex in Butner, N.C., he’ll continue to collect a pension; by contrast, Holmes says his time in prison left him with no health insurance and no long-term means of survival. And Holmes wasn’t the only person whose life was devastated by the former police commander's alleged tactics—Burge allegedly supervised the torture and wrongful imprisonment of as many as 120 people. Now, though, anti-torture advocates are pressing the city to make reparations that might go some way toward allowing survivors like Holmes to get back on their feet.

On Sept. 11, 2013, the Chicago City Council approved $6.15 million settlements for each of the convicted police torture victims Ronald Kitchen and Marvin Reeves. After presiding over the Council meeting at which the settlements were approved, Mayor Rahm Emanuel called the city’s sordid 40-year history of torture and cover-up a “dark chapter in the history of the city of Chicago,” and a “stain on the city's reputation.” When City Hall reporter Fran Spielman asked him whether this constituted the apology that Kitchen’s lawyers had demanded, Emanuel said yes—that “all of us” are “sorry for what happened. Let us all now move on.”

For years, the anti-torture movement—consisting of torture survivors, activists and their lawyers—had called for an apology from the city as part of a comprehensive set of remedies that would provide financial compensation, health care, educational opportunities and job training for torture survivors. And, they said, Emanuel’s seemingly impromptu “sorry” was nowhere near sufficient.

Headed by the Chicago Torture Justice Memorials Project (CTJM) and lawyers from the People’s Law Office, activists seized the opportunity of Emanuel’s response to present progressive 1st Ward Alderman Proco Joe Moreno with an ordinance that would encompass these remedies. Among other demands, the ordinance would require the city to administer financial reparations to all Burge torture survivors who are unable to sue for monetary damages because the statute of limitations for their claims has expired. The proposed ordinance would also provide all torture survivors and their families with tuition-free education at City Colleges; create a center on the South Side of Chicago that would provide psychological counseling, health care services and vocational training to those affected by law enforcement torture and abuse; require Chicago Public Schools to teach about these cases and sponsor the construction of public torture memorials. And it asks the city’s leaders to issue a formal apology to those who were tortured and their communities—not just an impromptu statement made to a reporter at City Hall.

After garnering the support of Alderman Howard Brookins Jr. as a co-sponsor, Moreno introduced the ordinance to City Council on Oct. 16, 2013.

In the past few decades, movements demanding redress for egregious human rights violations have taken hold across the globe. In Chile, for instance, the government has provided reparations to more than 28,000 survivors of torture and imprisonment under the Pinochet regime. These include a monthly stipend, free health care for victims and their families, free education and the construction of numerous memorials, including the Museo De La Memoria Y Los Derechos Humanos in Santiago. Meanwhile, in Argentina, more than $3 billion dollars has been paid to the families of at least 15,000 men, women and children who were kidnapped, tortured and executed by the military junta in the 1970s. And in South Africa, a controversial reparations program has provided a small amount of financial compensation to a limited group of 18,000 apartheid victims (out of an estimated 100,000) who suffered physical, mental or emotional injury as a result of gross human rights violations and who had testified before or registered with South Africa’s Truth and Reconciliation Commission.

Though the U.S. government has largely resisted acknowledging its human rights violations, such as the widespread genocide of Native Americans, there have been instances where grassroots campaigns have forced both national and state governmental entities to admit to and provide redress for extreme racial discrimination and violence. For example, the Civil Liberties Act of 1988 provided about $20,000 each in financial compensation to the surviving Japanese Americans who were forced to evacuate their homes and live in “Relocation Camps” during World War II. The Act also included an official apology that condemned the internments as the product of racial prejudice, war hysteria and the failure of political leadership.

In addition, the Florida state legislature approved a law in 1994 serving as an official apology for the violent race riot in 1923 that destroyed the Black community of Rosewood; the law provided financial remuneration of $150,000 to each of the nine remaining African-American survivors. And in 2002, the state of North Carolina publicly apologized to the survivors of the forced sterilization program that victimized 7,600 men, women and girls, a disproportionate number of whom were African-American, from 1933 to 1974. Eleven years later, the state authorized compensation to the survivors from a fund of $10 million.

Though the struggle for reparations for U.S. slavery has been unsuccessful to date, it is still alive. Every year since 1989, Rep. John Conyers Jr. (D-Mich.) has introduced reparations legislation in Congress that would both acknowledge the fundamental inhumanity of slavery and establish a commission to study and propose remedies for enslavement’s impact on present day African Americans. This bill, named HR 40 after the unfulfilled Civil War promise of 40 acres and a mule for freed slaves, now has more than 40 co-sponsors.

Two decades of working for justice

Similar grassroots movements have also been a part of Chicago’s activist history. Two generations of progressive aldermen and an active anti-torture community have repeatedly compelled the Chicago City Council to confront the question of Chicago police torture—with mixed results. On Christmas Eve in 1990, the Council’s Finance Committee convened a hearing at which lawyers and community organizations presented newly uncovered evidence that established the systemic nature of police torture under Jon Burge’s command. For much of the next fifteen years, the movement focused on seeking justice for the torture victims who had been sentenced to the death penalty and on pursuing the appointment of a Cook County Special Prosecutor to investigate the alleged crimes committed by Burge and his men. In 2007, after Special Prosecutors Edward Egan and Robert Boyle issued a report finding Burge tortured suspects “with impunity,” the Council held a hearing at which numerous aldermen condemned the city’s continuing defense of Burge and his confederates in the numerous pending civil suits that had been brought against them by exonerated torture survivors. (Burge himself was eventually sent to prison in 2011.)

On a more general scale, in 2010, several aldermen introduced a resolution that called upon Illinois to pass legislation that would make police torture a crime without a statute of limitations. Though that law did not pass, in January 2012, in response to a public campaign that focused on the police torture scandal, the Council unanimously adopted a resolution that declared Chicago to be a “torture-free zone.”

As far as the future of the movement is concerned, Chicago reparations activists have declared their intention to follow in the path of domestic and international human rights efforts by convincing the city's political leaders to provide eminently reasonable and fair redress to the Chicago police torture survivors and their family members. Aldermen Moreno and Brookins anticipate that a hearing on the anti-torture ordinance, which has been sent to the Finance Committee, will be convened this February. In the meantime, CTJM has launched a concentrated effort to persuade every alderman to support the bill, including promoting an online petition campaign.

Through his City Council floor leader, Pat O’Connor, and his Corporation Counsel, attorney Steve Patton, Mayor Emanuel has already voiced his reluctance to compensate the survivors who are legally barred from suing the city by the statute of limitations. But in the face of the more than $20 million Chicago has spent defending Burge, Emanuel’s claim that the city is too cash-strapped to make reparations rings hollow. Without doubt, it is now well past time for Emanuel and the City Council to put weight behind their apologies and to make amends to the torture survivors, their families and their communities for the suffering they have been subjected to by the city and its agents during the past four decades.

Joey L. Mogul is an attorney at the People's Law Office, co-founder of the Chicago Torture Justice Memorials Project and co-author of Queer (In)Justice: The Criminalization of LGBT People in the United States. G. Flint Taylor is a founding partner of the People’s Law Office and has represented numerous survivors of police torture in Chicago for more than 25 years