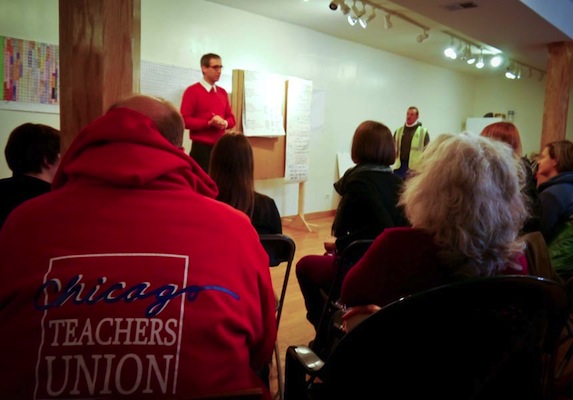 Schoolteachers Take On the Chicago Machine

The Chicago Teachers Union flexes its political muscle in the March primaries.

The Chicago Teachers Union plans to take the energy of popular democracy that has served the union so well and bring it into the city’s neighborhoods.

In 2011, Will Guzzardi, two years out of college, collected signatures and filed a petition with the Illinois State Board of Elections to challenge state Rep. Toni Berrios in the March 2012 Democratic primary.
Soon the then-24-year-old was campaigning door-to-door against Toni Berrios, the scion of Cook County’s Assessor and Democratic Party Chairman Joseph Berrios. For 10 years, Toni Berrios had represented the 39th District— which has a 54 percent Latino electorate and includes part of Chicago’s Logan Square neighborhood, a hipster haven on the city’s northwest side.
Guzzardi sought the endorsement of the Chicago Teachers Unions (CTU), which, under President Karen Lewis, was beginning to flex its political muscle. The CTU leadership recommended that the union make no endorsement in the race, but the House of Delegates (the union’s 800-plus-person governing body) disagreed and voted to endorse Guzzardi.
In the March 20, 2012, primary, Guzzardi, running an intensive grassroots campaign, came within 125 votes of defeating the five-term incumbent.
On March 18, he will try again—this time with the blessing of both the CTU leadership and the House of Delegates. Making good on Lewis’ promise to “change the political landscape in Chicago,” the CTU and its community organization allies have set their sights on two Illinois House seats, the 39th and 26th. Their long range game plan: Take down the Chicago Machine.
As a comparative literature major at Brown University, Guzzardi was inspired by David Segal, who in 2006, at the age of 26, was elected as a Democrat to the Rhode Island House. Segal had served the previous four years as a Green Party member of the Providence City Council.
Guzzardi, who was born in New York City and raised in North Carolina, fell in love with Logan Square during a visit to Chicago. Upon graduation, he settled there. After a stint as a Huffington Post editor, Guzzardi got a job in the admissions office of the University of Chicago.
An education activist, Guzzardi was involved in the 2012 non-binding city referendum for an elected school board, and in the spring of 2013, he helped organize against school closings. “One of our neighborhood elementary schools, Brentano Elementary, was slated to be closed, and parents and teachers successfully organized to save it,” he says. Residents of other neighborhoods were not so lucky: 50 schools were closed citywide.
Guzzardi has high hopes about his chances of unseating Berrios this time around. “Although we will surely be outspent, I firmly believe that the grassroots organizing power of this campaign will prevail,” he says.
The Saturday after receiving the CTU endorsement, his campaign had an Educators for Guzzardi day, in which more than 50 people turned out to canvass, about half of whom were wearing red, the trademark color of Chicago teachers during their 2012 strike.
“That sent a very powerful message,” says Guzzardi, “because voters in this district are deeply concerned about the quality of education and strongly support the efforts of members of the CTU to improve the quality of that education.”

Power to the teachers

Jackson Potter, the CTU’s “staff coordinator”—and the person many see as the union’s chief strategist—acknowledges that the CTU backing a young white guy against a Latina in a Latino- majority district goes against the grain.
“It was a close call,” says Potter. “Our members were very conflicted. Toni [Berrios] has been good on a lot of our issues in terms of her voting record. And we are aware of her support in the Latino community, and we respect that. We just think that Will will be a stronger advocate for our issues. It was a rank-and-file choice.”
Another candidate to gain a CTU endorsement is Jay Travis, a 41-year-old community organizer who wants to represent the 26th district—including the district’s most famous registered voter, Barack Obama. Between 2000 and 2012, Travis served as the executive director of the Kenwood-Oakland Community Organization (KOCO). The CTU endorsed her candidacy because of her 20 years of experience as a community organizer and her work to stop school closures. As Travis puts it, all children have “the right, regardless of their race or income, to have access to a quality public neighborhood school.”
Travis is seeking to unseat Rep. Christian Mitchell. At 27, Mitchell is the youngest member of the Illinois General Assembly. He has represented the 26th District since November 2012, when he was elected with the backing of Mayor Rahm Emanuel and much of the Democratic Party establishment.
The CTU views Mitchell as a tool of Stand for Children, an education “reform” group that contributed $50,000 to his 2012 campaign. Stand for Children was founded in 1996 by Jonah Edelman, the son of Children's Defense Fund founder Marian Wright Edelman. Education scholar and former George H.W. Bush administration official Diane Ravitch has described Stand for Children as “a handmaiden of the hedge fund managers and super-rich, promoting their agenda of privatization.”
In 2011, Edelman, via Stand For Children, helped mastermind the passage of an Illinois education “reform” law that included a provision aimed at curtailing the ability of teachers to strike by requiring a three-quarters vote of union members. During a summer 2011 talk at the Aspen Ideas Festival, Edelman bragged about his successful mastery of pay-to-play politics, Illinois style. He said:

We raised $3 million for our political action committee. … What we did in a very short period of time is shift the balance of power. I can tell you there was a palpable sense of concern, if not shock, on the part of the teachers unions in Illinois … that we had clear political capability to potentially jam this proposal down their throats. … The Chicago Teachers Union took that deal misunderstanding, probably not knowing, the statistics about voting history. … The unions cannot strike in Chicago. They will never be able to muster the 75 percent threshold necessary to strike.

Fast forward to January 2014, when the union’s House of Delegates voted to endorse Guzzardi. (Travis had been endorsed in December.) More significantly, they also voted to authorize the CTU joining an independent political organization, or IPO, that is currently being formed by a coalition of Chicago unions and community organizations.
Working with this IPO, the CTU—the first organization to formally, and publicly, join it—intends to help change the political conversation in Chicago.
“You have Rahm Emanuel dominated by his corporate friends, furthering their interests rather than the people he is supposed to represent,” says Potter. “But you don’t hear any discussion about that. It’s only, ‘How do we cut the pensions of public sector workers?’ ”
Potter says the new IPO will be a ground-up, grassroots, community-labor organization “capable of supporting the issues the vast majority of Chicagoans want implemented”—such as an elected school board and a significant increase in the minimum wage.
In other words, the CTU plans to take the energy of popular democracy that has served the union so well and bring it into the city’s neighborhoods. Once it has cut its teeth in the upcoming March Democratic primary, it will look to make a mark in the 2015 mayoral and aldermanic elections. To that end, it is helping create a political organization that will in effect function in much the same way as a political party.
According to Potter, the new IPO will field, endorse and campaign for the candidates of its choosing— whether they are Republican, Democratic, Green or Socialist.
The IPO means, says Potter, “in Chicago, pay-to-play is out the window.”