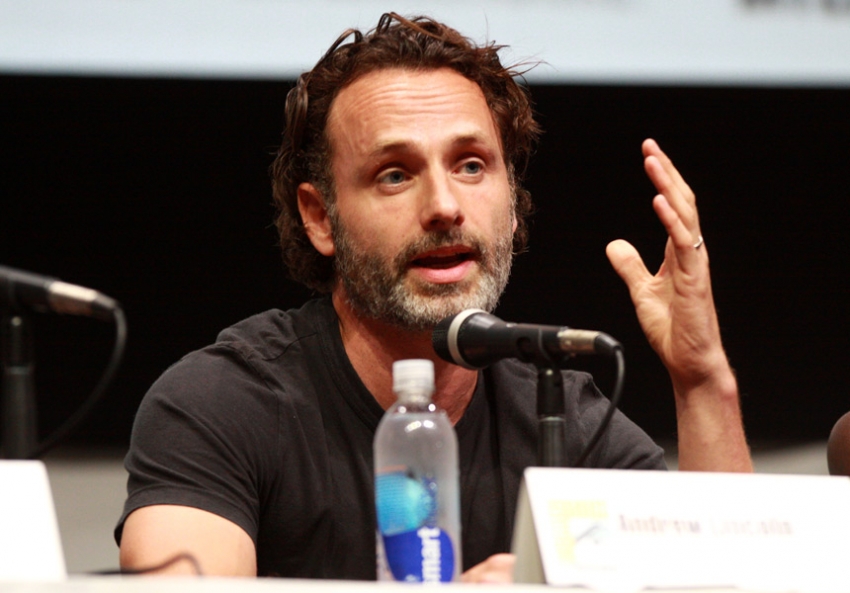 Andrew Lincoln, who plays Rick Grimes on 'The Walking Dead,' reaffirmed his Alpha Male status after getting a taste for human neck-flesh in Sunday's finale. (Gage Skidmore / Wikimedia Commons)

When It Comes to Zombie-Killing, Father Knows Best

‘The Walking Dead’ is arguably one of the more conservative shows on television.

In Sunday night’s fourth-season finale of the wildly popular horror-drama The Walking Dead, beleaguered protagonist Rick Grimes reinstated his identity as a man who will do anything to protect his friends and family, up to and including ripping out the necks of his enemies with his teeth. Such blood-and-guts horror is fairly typical for the show, which details the misadventures of a group of survivors trying to avoid zombie bites in a relentlessly humid post-apocalyptic Georgia. But The Walking Dead isn’t just the most-watched drama series in basic cable history; it’s also arguably one of the more conservative-minded shows on television, something Sunday’s finale reaffirmed right along with the throat-eating action.

Since its inception, The Walking Dead has made a point of examining how individuals and communities adapt to the constant threat of imminent death via undead horde. In the show’s universe, the humans who manage to survive the recently deceased’s attempts to eat them cluster into small communities. Within these communities, labor is frequently divided according to gender roles: The men hunt food, fix car engines, patrol the perimeters and pull water-logged zombies from wells, while the women plant gardens, clean clothes, tend to the children and occasionally undergo deadly C-sections.

The gender-based divisions within The Walking Dead aren’t incidental; the characters even occasionally comment on them, such as in Season 2, when then-central (now-dead) women Lori and Andrea duke it out over Andrea’s refusal to cook and launder. The show’s writers seem to be exploring whether traditional gender roles can withstand a zombie apocalypse. And as the series progresses, the answer has become increasingly ambiguous: Sweet-faced Beth gets down with a crossbow when it’s her survival on the line, and the bland Tyreese finds himself burping an infant when he’s the only surviving adult to care for it.

But even in the face of the undead masses, the traditional family unit—or its closest approximation—ultimately triumphs. When characters find themselves without relatives, their best chance of survival is to be effectively adopted. Michonne, the katana-wielding warrior, is inducted into Rick’s inner circle in Season 3, when Rick’s son Carl says that she “might be one of us.” Interestingly, Michonne has taken on more stereotypically feminine qualities since then. Flashbacks have revealed her pre-apocalyptic position of girlfriend and mother—all dressed up and serving the men food—and recent episodes present her as the mother figure in the new Rick, Carl and Michonne unit. Meanwhile, in a moment of heartwarming during Sunday night's traumatizing-all-around finale, Rick tells once-loner Daryl that he is now Rick’s “brother.” Thus, even as actual genetic relationships disappear due to everyone’s relatives getting eaten, characters still divide up into paternalistic family patterns.

Academics and philosophers have long argued that a family-based morality within a chaotic, Hobbesian world is fundamental to conservative philosophies. In 1995, George Lakoff, a cognitive scientist at Berkeley, posited the “Strict Father Model” as a metaphor for the conservative worldview. The Strict Father, according to Lakoff, protects his family from an outside world that is fundamentally dangerous and antagonistic. He values self-discipline and believes that while children must be taught, they must then be left to their own devices rather than coddled. Lakoff notes that the ideal form of the conservative father is “restrained in showing affection and emotion overtly, and prefers the appearance of strength and calm”—in other words, pretty much a character sketch of Rick Grimes at his most effective.

In the first season, Rick, who was a sheriff’s deputy before the reanimated corpses took over, struggles to weigh the exigencies of community cooperation with the need to take care of his immediate family. Amidst these competing priorities, Rick’s son Carl has always ranked first—in Sunday’s finale, Rick explains his increasingly brutal nature to Daryl by saying that keeping Carl safe is “all that matters.” And apart from all the zombies, the conflict of the first two seasons centers on a love triangle among Rick, his once-best friend Shane, and his then-living wife Lori. Ultimately, the clash boils down to Shane’s attempt to steal Rick’s family to become the primary protector of Carl and Lori. In the climactic faceoff between the two of them, Shane insists that he must replace Rick as the father figure. “I’m better for Lori than you!” he says, “and it’s because I’m a better man than you are … you got a broken woman, you got a weak boy, and you ain’t got the first clue how to fix it.” But in the end, Shane’s failure to adhere to the “strict father” model is his undoing: His emotions get the best of him, allowing Rick to take the opening and put a knife through Shane’s abdomen.

Rick emerges as the Alpha Male after killing Shane, yet Shane’s assertion that Rick is actually too soft to protect his family remains Rick’s greatest potential character flaw. In order to defend his family, after all, the paternalistic father must properly discern the harsh reality of a fundamentally antagonistic world. The Atlantic’s Jeffrey Goldberg has frequently argued about Dead’s “obvious political conservatism,” writing that “Conservatism, as I understand it … means in part that you grapple with the tragic reality in front of you, rather than make believe that the world, and human nature, are things that they are not.”

From this conservative viewpoint, life is inherently dangerous, and men in particular must be on constant guard to shelter their family from external threats. Nettlesome questions like “I wonder what caused the zombie apocalypse?” or “Do you think scientists in D.C. are solving the zombie apocalypse?” are irrelevant. What’s relevant is making sure that one of the zombies doesn’t take a bite out of your son.

The fourth season has followed Rick’s trajectory toward fully embracing these brutal realities. In the season premiere, Rick’s group of survivors has settled comfortably into a large prison complex. The tall walls and wire fences keep the zombies out, and Rick has become complacent as a result. In the opening scene, Rick tends to a garden with headphones in his ears, willfully ignoring the menagerie of “Walkers” leering at him from behind a fence. But Rick’s departure from the “protector” role is by no means framed as an expansion of his skills. In last night’s finale, flashbacks to this time period emphasize that Rick’s relatively free time would have been more pragmatically spent showing Carl how to shoot a gun than how to grow cucumbers. The Rick of these quaint memories seems especially naïve when contrasted with the hardened, jugular-chewing man of the present day, who has indeed resumed teaching Carl how to hunt and shoot.

Fittingly, The Walking Dead’s most reviled characters are those who don’t accept the reality of the zombie apocalypse. Such is the case with the Governor, the series’ central villain to date, who otherwise possesses many of Rick’s stoic characteristics. The Governor wanted to keep his family together—that’s good—but when they got zombified sometime prior to meeting our heroes, he couldn't accept their loss, instead letting his emotions rule over logic and necessity. Rather than killing his zombie daughter to contain the threat, the Governor keeps her locked up and tries to read her bedtime stories. He also tries to find a replacement partner in Andrea, who looks remarkably like his dead wife.

Characters like these, who don’t accept the reality of an antagonistic world, are a danger to their family. In “The Grove,” for example, which takes place halfway through Season 4, the young Lizzie believes that the Walkers are friendly, misunderstood humans, leading her to murder her biological sister and ruin Carol and Tyreese’s rosy plans to settle into a domestic unit with the two girls.

And within these family-first constructs, The Walking Dead also treats those that put “community” interests above the individual and their immediate kin with great suspicion. Joe, the leader of a group of homicidal bikers, reserves the right to mete out beatings in the name of community order—he’s the one who meets a gory end in the finale, courtesy of Rick’s neck-eating. Similarly, the Governor’s dystopian community of Woodbury forces individuals to donate their guns to the community stockpile. Rick, meanwhile, allows the members of his group to keep themselves and their families safe; in return, they’re incredibly loyal to him.

In Sunday night’s finale, Rick is back to dominant status once again after saving Carl, Daryl and Michonne from Joe’s clan. But his crew will now face down another potential foe: Terminus, where they end up, is either populated by loving hipsters or nightmarish cannibals. Either way, the outside groups in The Walking Dead have rarely proved to be harmless. Rick’s group doesn’t just need to fight zombies to stay alive; they need to fight anyone who isn’t part of the family.

Katherine Don is a freelance writer and editor based in Chicago. She edits books at The Book Don and tweets about books, reproductive justice, and the media @KatDon1.