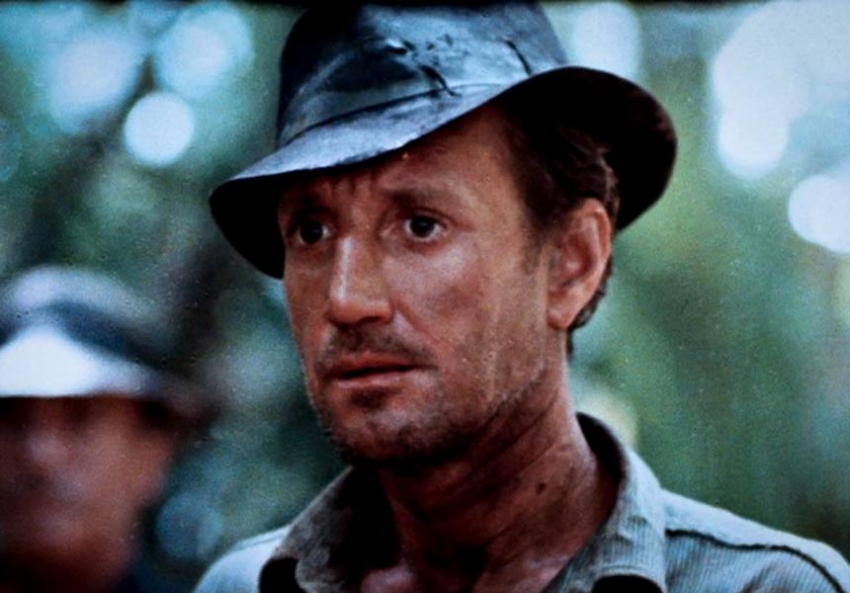 William Friedkin’s unfairly maligned Sorcerer, now out on Blu-ray, is finally getting its due. (Photo courtesy of Warner Brothers)

The Summer Movie Road Not Taken

1977’s Sorceror was the antithesis of Star Wars, and we could learn from it

Show some 21st-century kids, raised on patently fake Spider-Man swooshes and Avatar rainbows, the trucks-on-the-rope-bridge-in-a-monsoon sequence from Sorcerer, top to bottom, and watch their jaws swing open like trap doors.

As the “summer” movie season expands to consume 50 percent of the year, and the theaters become overrun with CGI fanboy refuse, you will do no better in movie terms than to seek out a 37-year-old Hollywood film just recently restored and Blu-ray-ed, a film so rich with naked nerve and eye-jolting realism that it could refashion your ideas about American movies. William Friedkin’s Sorcerer (1977) was a bomb in its initial release, and hasn’t been commonly regarded as anything but in the decades since. All the same, it fulfills every promise the American New Wave era ever made to grown-ups, in ways that are almost the exact opposite of its 1977 blockbuster-for-prepubes antithesis: Star Wars.

Two trucks, a load of sweaty nitro-glycerine, a distant oil fire, and a bajillion miles of unpaved South American jungle hellhole roadway. How much money would they have to pay you, or how hopeless would you have to be, to take the job to drive the unstable explosives through the impossible landscape in order to blow out the rampaging well fire? Hired by the oil company, the four men who accept the offer are disposable outlaws in hiding with nothing left to lose: an American hold-up man (Roy Scheider), an Arab terrorist (Amidou), a French bank embezzler (Bruno Cremer), and an assassin of unknown origin (Francisco Rabal). The scenario, from Georges Arnaud’s 1950 novel and Henri-Georges Clouzot’s 1953 film The Wages of Fear, is a loaded cannon, built to bruise, armed with a fresh kind of No Exit action setup that no pulp, not even film noir, had ever come close to. This was fiction, and cinema, of hopeless procedure, of suicidal tribulation, anchored in the real world of industry and poverty. Clouzot’s version, bearing a classic status that pegged Friedkin’s remake as an act of hubris, is hammy and stuffed with back-projection. It has nothing on the carbon odor of emergency in Friedkin’s film, which remains a jugular ordeal that no amount of vertiginous CGI fart-noise will ever approximate.

That’s because it’s real. Riding as high as an auteur could after The French Connection (1971) and The Exorcist (1973), Friedkin went deep on location into the Dominican Republic forest, spending like a drunken sailor and wrestling with nature itself, generating a vibe so caustic and arresting that when I saw it in the theater as a kid, I remember thinking that Hollywood movies were becoming dangerous and mature and daring, and wasn’t I lucky to have a front-row seat.

Zooming spaceships were nice, but Friedkin’s voyage to somewhere you weren’t sure cameras were even supposed to go had me snookered. Put it to the test today: Show some 21st-century kids, raised on patently fake Spider-Man swooshes and Avatar rainbows, the trucks-on-the-rope-bridge-in-a-monsoon sequence from Sorcerer, top to bottom, and watch their jaws swing open like trap doors.

The visceral experience of the film gains everything by being something you cannot doubt. Think of the last recent American movie you could say that about. I was essentially correct, sitting there in my mid-teens and awed by Friedkin’s jungle boogie: American movies had grown up. But of course it didn’t last. For those of us with an emotional-historical stake in such things, George Lucas’ invention of the kid-directed F/X blockbuster that same year was like a descent of the Dark Ages, a de-maturation of the century’s most vivacious art form, just as it was gathering steam. It’s only gotten worse in time. In a theater this April, I was served trailers for six summer films (The Amazing Spider-Man 2, Transformers: Age of Extinction, etc.) and saw the future of movies: There was nothing onscreen a 12-year-old wouldn’t understand, and nothing that wasn’t a matter of stupid, fake visual massiveness. We’re all being reduced to a preteen point of view and a sixth-grade menu of experiences.

A radical intervention may be required, and in movie form I can’t think of any as tough-minded and resonant as Sorcerer. For years the film was maltreated by its studios, coming to broadcast and video only in a faded version with a third of the picture lost to TV formatting. Friedkin himself has shepherded this new restoration, as a kind of capstone to his long and stormy career. Now, no matter how juvenile new movies become, it’ll be there for those of us looking for stronger drink.