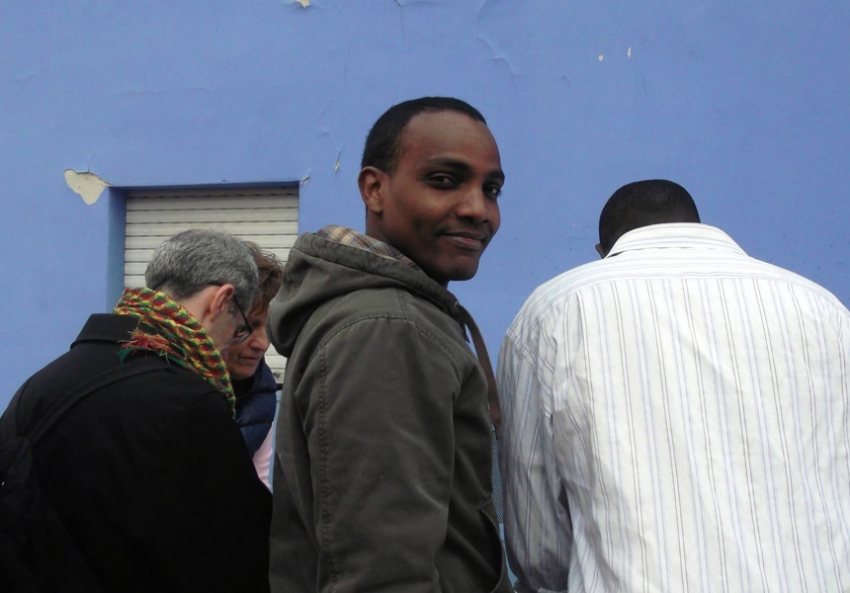 Baba Konè, who fled to Italy from Libya in 2011, stands in front of the former Olympics complex where he lives with hundreds of other refugees. (Giorgio Ghiglione)

The country’s structural support systems are quaking under the sheer volume of immigrants seeking asylum.

'There's 11 of us living in one room,' says Konè. Even so, he continues, the ramshackle conditions 'are not the problem.'

Baba Konè, 27, worked as a truck driver in Libya until three years ago, when his parents were killed in the civil war that eventually ousted Muammar Gaddafi. Fearing for his own safety, the Nigerian left the country in 2011 to cross the Mediterranean Sea by boat, eventually reaching the Italian coast through the Strait of Messina.

“I came to Italy to seek a better life,” Konè says.

Konè now lives in Turin, a city in northwestern Italy that hosted the Winter Olympics in 2006. He is just one of the tens of thousands of refugees who have escaped to Italy in recent years from conflicts in the Middle East and across Africa. The European Union’s 2003 Dublin regulation states that asylum applications can only be processed in the nation where immigrants first arrive; as a consequence, Italy has sheltered a massive influx of refugees in recent years. Unfortunately, the country lacks the infrastructure to handle the increasing numbers of people fleeing for their lives—some officials estimate that up to 800,000 are currently gathering in Libya to do just that.

This week, Italy’s interior minister, Angelino Alfano, finally demanded help in the form of personnel or finances from the rest of the EU. Otherwise, he said, Italy will begin sending refugees to neighboring countries, no matter what the Dublin regulation says.

Thanks to Italy’s overloaded systems, immigrants who make it through the treacherous Mediterranean journey often find themselves without any support once they arrive. Konè, for example, eventually ended up squatting in an abandoned Olympic complex in Turin.

Originally built to host athletes for the Winter Games, the building—nicknamed “Moi” after the farmers market, “Mercati Ortofrutticoli all'Ingrosso,” that used to take place in that site before the construction—was essentially abandoned by the city of Turin after no one showed interest in purchasing it. After eight years of neglect, Moi is almost in ruins, with no running water and chipped exterior walls.

Above all, though, it's the lack of heating that poses the biggest threat. Though Turin has a generally warm climate, temperatures still fall to below freezing in winter, forcing Moi’s residents to gather around small stoves to avoid hypothermia.

In addition, the building is severely overcrowded—though it was originally constructed to house 200 athletes, Konè says he is one of about 600 refugees staying there.

“There's 11 of us living in one room,” says Konè. Even so, he continues, the ramshackle conditions “are not the problem.”

The real issue, Konè says, is that it is nearly impossible for the immigrants to find work to support themselves.

In 2011, the Berlusconi government launched the “Emergenza Nord Africa” to manage the thousands of refugees who, like Konè, were entering the country from dangerous regions. Under this plan, all migrants crossing the Mediterranean were first held for several months inside an “identification center” in Lampedusa, a small island near Sicily. After that, they were routed throughout Italy into “reception center” facilities—generally converted hotels or resorts—where they were provided with food and medical care.

But the plan was only meant to be a temporary measure. On Feb. 28, 2013, the government abruptly shut down the reception centers, leaving many refugees in a desperate situation.

“Many of them were left without knowing a single word of Italian,” explains Carlo Maddalena, a journalist in Turin who volunteers teaching Italian to migrants. “They don't know how to apply for a residence permit, or even how to call a doctor.”

Maddalena notes that the Italian government “allocated an enormous sum for the refugees” during the Emergenza Nord Africa plan, which cost, in total, more than 1 billion Euros. Each individual refugee, says Maddalena, cost the government about €42 per day during his or her stay at an identification center. However, this money was used just to provide food and shelter; no plans were made for the immigrants’ long-term prospects.

Such was the case with many of the asylum-seekers Konè knew at his reception center in Padua. After it closed, he says, he and the other refugees were given €500 (approximately $670) to start a new life and sent off on their own.

Unfortunately, as Maddalena argues, their lack of training—or even knowledge of Italian—has trapped them in limbo, with limited means to find work or schooling. Even if they do get help in applying for residency after their two-year refugee status has expired, which can help them jump the administrative hurdles of accessing social services, approval can take months.

Konè was lucky: After sustained pressure from allies in the activist community, he was able to obtain the documents allowing him to work in a solar panel factory and take on a few other scattered temporary jobs. But many of his neighbors in Turin—as well as the approximately 64,000 other political refugees in Italy—do not have access to such luxury.

And the situation in Turin, local activists say, is representative of hundreds of others occurring in cities around Italy. For instance, they argue, the fact that the migrants illegally living in the former Olympic complex haven't been evicted yet is just a matter of public order. After all, says one activist, Monica Frattari, “Having such a large [number] of people in the streets, with no income nor prospects, would be a total disaster.” Authorities know that, but they “lack a clear idea of how to handle the problem in the long term,” she continues. “So they prefer to turn a blind eye.”

Frattari, who was instrumental in organizing the protests that eventually allowed Konè to achieve residency, says the immigrants have effectively been abandoned. “Once these people were released from the camps,” she says, “It is as if they disappeared from the public scene.”

Local officials in Turin, however, say they are not the ones to blame.

Elide Tisi, the deputy mayor and a member of the center-left city administration, says officials “have pointed out to the situation of the Moi to the central government.” There are about 2,300 refugees in Turin alone, though that number varies given how often they change cities in search of work.

Immigrants are in dire straits, she says, because of the overall lack of employment opportunities in the cities where they settle.

“We had no problem with reception [in Turin] when the economy was fine,” says Tisi. She sees the difficulty immigrants have with navigating Italian bureaucracy as a secondary issue; rather, she argues, “The real problem for foreigners is to find a job.”

Others say that while the system itself is viable in theory, it’s not suitable for the sheer volume of people who reached Italy after the conflicts intensified in Libya and other African and Middle Eastern countries.

“The problem is the number of asylum-seekers,” says Lorenzo Trucco, a lawyer and president of ASGI (Association for Legal Studies on Immigration). In order to avoid further scenarios such as the one at Moi, Trucco believes Italian authorities must change their approach on both a central and local level.

Italy does have some facilities available, such as language schools, which could help immigrants assimilate into Italian culture. But there simply aren’t enough available, Trucco points out. According to the New York Times, in 2012, Italy only had about 3,000 spots in such programs—roughly five percent of the total refugee population.

Unfortunately, a structural overhaul may be unlikely to occur anytime soon. Fearing a public opinion often hostile toward Africans, authorities have frequently opted to effectively confine refugees into a no man's land. Once they reach Italian soil, their existence soon seems forgotten: The media talks about African asylum-seekers only when there's some news about a migrant boat wrecking off the coasts of Sicily.

The truth is, for many politicians, immigration is a topic too delicate to deal with, especially in a time of economic crisis.

Several big parties are openly anti-immigration. At the last national election in 2013, the third-most popular party was the “Movimento 5 Stelle”, or Five Stars Movement, which opposes granting citizenship to foreigners. Meanwhile, the right-wing “Lega Nord”, or Northern League, which was part of the government coalition until November 2011, regularly organizes demonstrations against the presence of immigrants in Italy. A significant number of Italians are resistant to permanent solutions for refugees, fearing that foreigners take away jobs and resources.

Given this climate, it is no surprise that few politicians have bothered thus far with long-term solutions for the rising number of immigrants. But Trucco thinks the circumstances require cohesive action, and fast. “We need to expand the system of reception of local communities, overcoming the logic of emergency,” he says.

Most of all, Trucco says, “We must stop seeing immigrants only as a problem of public order.” Instead, he says, we should “start seeing them as a people capable of bringing resources and benefits to the country.”

Giorgio Ghiglione is a journalist and video maker based in Northern Italy. He has worked, among others, for La7 TV and the Christian Science Monitor. His website is http://journoinitaly.wordpress.com.