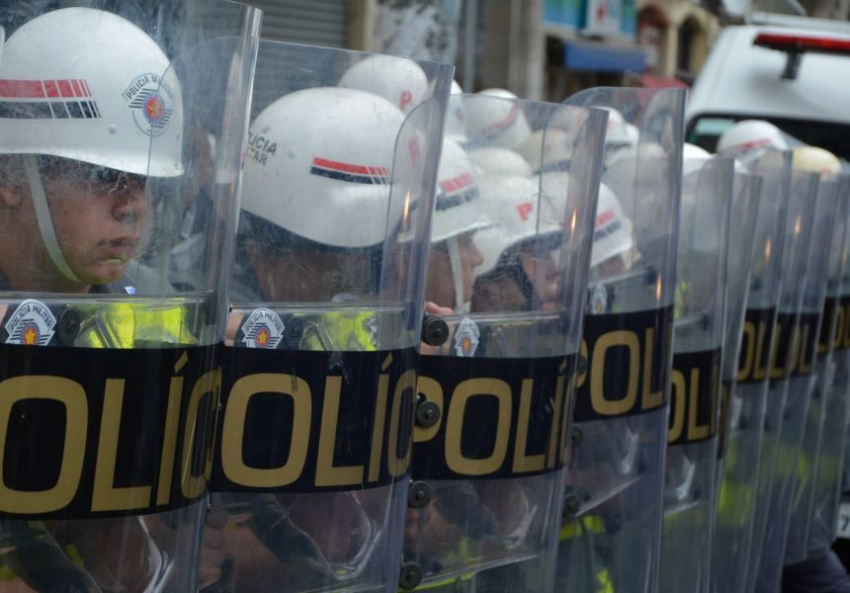 With all eyes now on Brazil—and its protesters—it’s time to not only resist the repression of protest rights, but also to confront the business incentives that fuel the escalation of force.

On June 12, Brazilian police fired tear gas on a group of 50 unarmed marchers blocking a highway leading to the World Cup arena in São Paulo. On June 15 in Rio de Janeiro another 200 marchers faced floods of tear gas and stun grenades in their approach to Maracana stadium. Armed with an arsenal of less lethal weapons and employing tactics imported from U.S. SWAT teams in the early 2000s, police clad in riot gear are deploying forceful tactics, wielding batons and releasing chemical agents at close range. In Brazil, this style of protest policing is not only a common form of political control, but also a booming business.

Events like the World Cup and Olympic Games—also to be hosted by Brazil in 2016—shine a spotlight on national security. Perform well, in the eyes of the industry, and receive invitations around the world for keynote speeches, consultancies and training operations. For Condor and the broader Brazilian security sector, the World Cup is like a fashion week; it is an opportunity to showcase the latest police gear, baiting future buyers.

While Condor will not officially divulge details of its profits, according to the curriculum vitae of its Marketing Director, the company has international sales of $50 million of non-lethal weapons and ammunition. In recent years Condor has seen an increase in its revenue of 33 percent as a result of a new marketing strategy engaging communication tools and trade show participation. With these initiatives the marketing director has overseen an average sales growth of 90 percent and has increased sales from 12 countries to over 40, with new markets in Asia and Africa.

Under giant banners of the Brazilian flag, Condor is now a regular exhibition stall holder at the world’s leading internal security expos, including DSEi and Milipol, where they show off their wares to government and military buyers. Such new devices on display include the “ballerina grenade,” which jumps on the ground to avoid “throwback” by protesters.

Condor’s large range of riot control technologies are shipped abroad to hundreds of cities around the world, including to countries with documented human rights abuses. This behavior has led to scrutiny of Condor’s 2010 promise to be a “pioneer in the dissemination of the ‘Non-Lethal’ concept in Brazil… through the controlled use of the escalation of force, without any harm to human rights.”

All international sales of tear gas in Brazil go through Brazil’s Ministry of External Relations and the Ministry of Defense. However, they do not keep a record of how they are used and sales figures aren’t made public. According to a report by investigative journalist group Publica, “In this industry, the norm is a lack of transparency.”

Despite their increased use as a deadly force, “riot control” remains exempted from the Chemical Weapons Convention that permits toxic gases to be deployed against civilians. Like other weapons that can be classified as policing equipment, these agents often fall outside of arms sales restrictions. This leaves their for-profit trade even less regulated than the pharmaceuticals industry.

Brazil’s rise to the top of the international protest policing industry is largely the result of the country’s relaxation of rules around arms sales in the early 2000s. In 2002 the Brazilian government put forward a new set of flexible policies to increase national revenue. The Ministry of Defense collaborated with “Foreign Affairs (Itamaraty), Science and Technology and those in the economic area,” according to the Sao Paulo Gazeta Mercantil. Frederico Aguiar, then-president over Condor’s contracting and sales, said “There is an increasing awareness that a country as politically and economically important as ours cannot remain dependent on defense systems designed and produced abroad.”

Alongside this move to increase the production of police technologies, came changes to policing practices. According to a report by Cirro Barros of Publica, in 2004 Brazil established the Força Nacional to deal with public security emergencies, forming part of a wider plan to expand military training for public order policing.

In 2006, Condor and the Brazilian government jointly hosted what was at the time the largest less lethal weapons conference in the world, catapulting them onto the international stage. Speakers included U.S. military expert Colonel John B. Alexander—of “The Men Who Stare at Goats” and UFO fame—as well as Charles “Sid” Heal, a man central to the development of military tactics for policing. Said to have “written the bible on SWAT,” Commander Heal provided consultancy for Condor as the company expanded its for-profit pursuit of the protest policing and “peacekeeping” markets. Recent investigations by Publica reveal continued U.S. involvement in the militarization of Brazilian police, with FBI consultations and trainings conducted in centers funded by the U.S. State Department.

While the Brazilian government points to its policies to evade blame, corporate manufacturers like Condor remain protected behind warning labels, despite the increasingly abusive deployment of their products. In recent years Condor’s technologies have been repeatedly used against protocol to intentionally increase harm and even systematically torture people in Turkey, Bahrain and Egypt. “We always advise the right escalation of force,” promises Beni Iachan, a senior business analyst for Condor. Such advice legally allows manufacturers like Condor to avoid accountability, while supplying governments and their police with ever more methods for violently escalating force.

While Condor’s revenue soars, around the world the company’s canisters, grenades and rubber bullets continue to be fired at close range at people’s heads and upper bodies. Devices are launched into enclosed spaces, reaching deadly levels of toxicity. And expired chemical agents bearing the Condor brand are being used against civilians, most recently documented on the streets of Venezuela.

As accounts of riot control deaths and injuries pile up, it is becoming increasingly difficult for companies like Condor to cling to the “nonlethal” in their corporate name. Along with local activists, Brazilian human rights campaign group Tortura Nunca Mais, or Torture Never Again, and investigative journalists at Publica are working hard to raise public awareness around the role of these weapons in police abuse and the need for increased accountability.

Exposing links between government and corporate protest profiteering, Publica is currently mapping out Condor’s influence on government agencies. “We recently discovered that Condor has an exclusivity deal made by the Brazilian Defense and Security Industries Association,” explained Bruno Fonseca, an investigative reporter at Publica. “That means all public defense and security public institutions, such as the Brazilian police, may purchase without a government procurement process.”

This allows hundreds of thousands of Condor weapons to be put in the hands of Brazilian security forces without government oversight. “Condor has exclusivity for 27 types of non-lethal equipment,” said Fonseca. The Brazilian government’s use of excessive force and failure to regulate their riot control practices are now under scrutiny by Amnesty International’s global campaign, Give Them A Yellow Card, which is monitoring the repression of peaceful protest during the World Cup.

With all eyes now on Brazil—and its protesters—it’s time to not only resist the repression of protest rights, but also to confront the business incentives that fuel the escalation of force. “Corporations around the world like Condor see this as an opportunity to make a profit—and they are absolutely profiting off of state repression,” said Kimber Heinz of the global Facing Tear Gas campaign.

Unmasking who profits off world protests reveals the intersections of governmental control and big business, pointing to new targets for campaigning and nonviolent direct action.  “Militarism is a global project with local implications,” explained Heinz. “Our campaign work targets the engines of militarization: training sites, weapons expos and government programs, building a base of opposition to militarism and policing from the grassroots.”

Reprinted with permission of Waging Nonviolence.

Dr. Anna Feigenbaum is a lecturer in Media and Politics at Bournemouth University. She is a co-author of the book Protest Camps (Zed 2013) and is currently writing a book about the political history of tear gas, forthcoming from Verso in 2015. Afeigenbaum [at] bournemouth.ac.uk. Follow @drfigtree on Twitter.