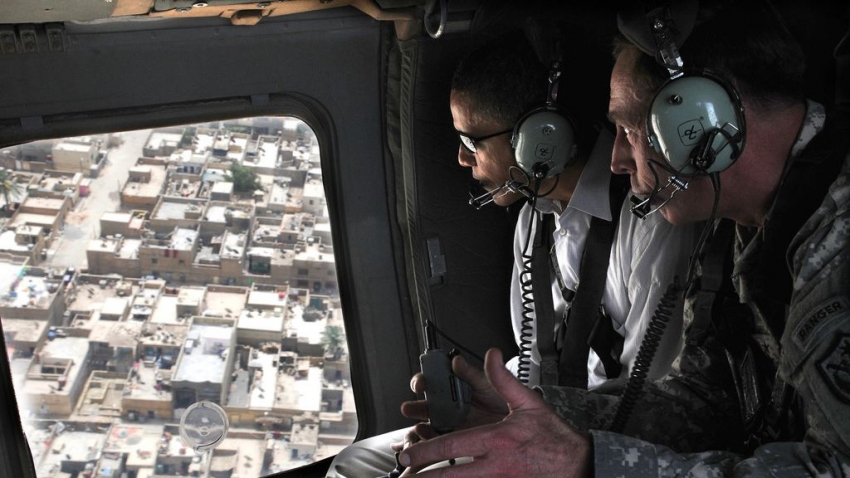 On June 19, President Obama announced that he would send "up to 300" military advisers to Iraq to help curb the violence in the nation. (DVIDS / Flickr / Creative Commons)

The Neverending Syndrome: From Vietnam to Iraq

As Iraq plunges into civil war, we should indeed play the blame game.

Today we see the unfolding consequences of the 2003 invasion of Iraq. The architects of that war cannot be allowed to start their propaganda campaign afresh.

The disintegration of Iraq into warring ethnic and religious factions has become an occasion for the neocons to resume their campaign for endless empire.

On June 17, on CNN, Paul Wolfowitz, Bush’s deputy secretary of defense and one of the architects of the Iraq War, said that if President Obama would only admit his mistakes in Iraq, “the blame game would stop immediately.”

But should it? Wars reverberate throughout history. A failure to remember how wars were started leaves the door open for similar misadventures in the future.

Vietnam, the most deadly U.S. war of the past 60 years, lasted from 1954 to 1975. This 21-year war killed an estimated 2 to 3 million Vietnamese and 58,000 Americans. U.S. responsibility for this tragedy rests with the Cold War mandarins and with the Commanders-in-Chief Eisenhower, Kennedy, Johnson and Nixon, all of whom lied to the American public about their foreign policy debacle. But within years of its end, Vietnam morphed from a folly into a malady—the Vietnam Syndrome.

In August 1980, candidate Ronald Reagan said: “For too long, we have lived with the Vietnam Syndrome. … It is time we recognized that ours was, in truth, a noble cause. … There is a lesson for all of us in Vietnam. If we are forced to fight, we must have the means and the determination to prevail.”

And prevail we did. In March 1991, President George H.W. Bush, speaking to the American Legislative Exchange Council, declared victory in the Gulf War: “By God, we’ve kicked the Vietnam Syndrome once and for all.”

Fast forward to August 2007. President George W. Bush defended his War on Terror by comparing it to Vietnam: “Like our enemies in the past, the terrorists who wage war in Iraq and Afghanistan and other places seek to spread … a harsh plan for life that crushes all freedom, tolerance and dissent. … Will today’s generation of Americans resist the allure of retreat?”

Today, the architects of the Iraq War scramble to rewrite history. In a June 17 Wall Street Journal op-ed, Liz and Dick Cheney, shifting the blame, condemned Obama: “Rarely has a U.S. president been so wrong about so much at the expense of so many.”

Yet who owns the Iraq War? Certainly not Obama, who opposed its authorization from the get-go. Wars tend to never end. World War I began 100 years ago, but rather than conclude with the 1918 armistice, it lingered on in the currents of national chauvinism that led to the rise of fascism and World War II—a war that ended in the incineration of Hiroshima and Nagasaki, and set the stage for the Cold War. The toll from the First and Second World Wars: an estimated 77 million dead humans.

Similarly, the Vietnam War—which by the 1970s had spread to Cambodia— spawned Pol Pot, a fanatic who killed an estimated 3 million of his countrymen after coming to power in 1975.

Today we see the unfolding consequences of the 2003 invasion of Iraq. The architects of that war cannot be allowed to start their propaganda campaign afresh.

Nor can Americans ignore the underreported drone war Obama is waging in Yemen, Pakistan, Afghanistan, Iraq and elsewhere. What price will future generations pay for that campaign?

Here’s to the blame game … and to the Vietnam Syndrome.