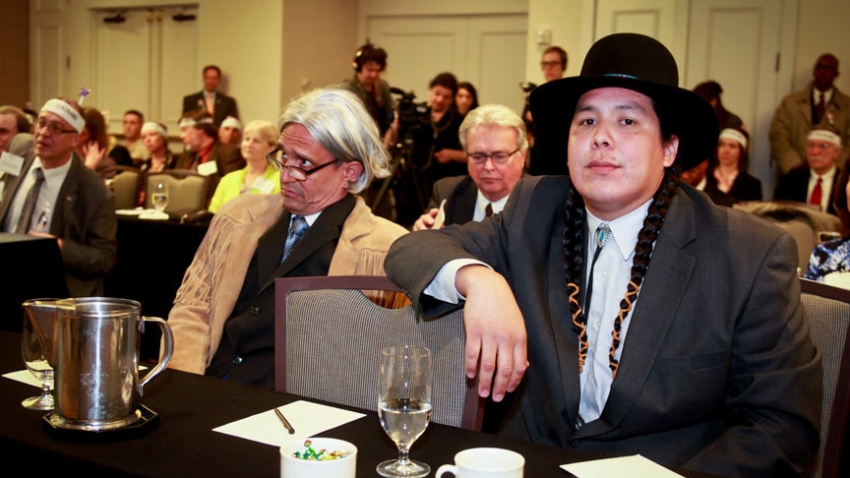 "Benedict Waterman," actually Andy Bichlbaum (L), and "Bana Slowhorse," actually Gitz Crazyboy (R), propose a radical, yet fake, energy plan to the rousing approval of some of America's most conservative government and corporate officials. (Courtesy of The Yes Men)

The Yes Men Secure the Homeland

As Tito Ybarra began singing his strange song, the defense contractors, law enforcement officials, retired generals and admirals, and even a former Navy Seal danced together in a huge circle.

The hosts of the Homeland Security Congress were getting anxious. It was ten minutes past the time former Secretary of State Gen. Colin Powell was scheduled to begin his big announcement. The defense contractors, law enforcement officials and assorted military personnel in the audience were starting to fidget.

“Ladies and gentlemen, Mr. Powell is nearly here,” announced the conference host, a woman named Barbara wearing a bright red power suit. “Please sit tight for another few minutes—meet your neighbor! And get ready for what I hear will be an extremely interesting announcement about our nation’s new energy plan.” There was a murmur of forbearing chuckles.

“So really, how long do we think he’ll be?” whispered another of the conference organizers, a muscular woman named Doreen to a man known to her as “Mike Lee.” Like all the conference people, Doreen thought Mike was a higher-up at the eminent public relations firm Burson-Marsteller.

“Well, I just got some really good news,” answered Mike. “Powell’s unfortunately still a half hour away, but he’s got a colleague at the Department of Energy, a guy named Benedict Waterman. He’ll be here in just five minutes. He’ll be accompanied by Bana Slowhorse from the Bureau of Indian Affairs, who I’ve heard puts on an amazing show.”

In fact, Mike had no idea whatsoever where Colin Powell was at this moment; far from being Powell’s liaison from Burson-Marsteller, “Mike Lee” was actually Mike Bonanno from the Yes Men, a group known for impersonating government and corporate officials.

Finally, in walked Andy and Gitz. But what was that on Andy’s head?

Andy’s wig was supposed to look like the strange ’70s hair of his supposed boss, Department of Energy head Ernesto Muniz. But it had been delivered at 7 a.m. that morning by RuPaul’s wigmaker, who had begun work on it after a drag show ending at 4 a.m.

Doreen turned to Mike. “Wig,” she mouthed, pointing to her head.

“He’s a scientist,” Mike offered. “They don’t know much about hair.”

Mike’s heart sank. For the second time in 24 hours, he was certain the jig was up.

The day before, April 30, we were driving from New York to Washington, D.C., headed for the Homeland Security Congress, a conference run by a subsidiary of Northrop Grumman for businesses interested in securing government contracts related to homeland security. Mike had wrangled a speaking spot for Colin Powell by posing as Powell’s agent.

We knew Powell would never arrive. But in his place would be his “collaborators” from the Department of Energy (Andy) and the Bureau of Indian Affairs (Gitz). They would announce a U.S. government plan to convert the entire country to renewable energy by 2030, dismantling fossil fuel companies in the process and handing ownership of renewable energy production directly to individuals—and to Native American tribes, whose reservations happened to be in some of the windiest and sunniest areas in the United States. The profits would serve as reparations for genocide. The plan was a slightly more radical version of several actual proposals from environmental organizations, including The Solutions Project plans for all 50 states to convert to 100 percent renewable energy.

The Yes Men chose the Homeland Security Congress as our audience for this plan precisely because they were not our people. Many of them would be bonafide, gun-loving, flag-toting, rightwing patriots. Our goal was to see if we could promote this revolutionary (but entirely feasible) plan to people on the exact opposite end of the political spectrum. If we could get even those on the “Dark Side” to embrace a plan to end fossil fuels and democratize energy, it would confirm our suspicions that there’s only one force on Earth that’s holding us back from a sane future: the fossil fuel industry itself, and the tiny number of people who work for it.

But first, we had to actually get to the conference. And one hour out of New York, two phone calls made it seem we never would.

The first call was from Doreen. Mike, posing as a representative of Colin Powell from PR giant Burson-Marsteller, had been speaking to Doreen every other day for the past three weeks. He’d gotten Doreen to schedule Powell to announce at her conference, Obama’s top-secret new Energy Security plan.

For the first time, Doreen sounded suspicious. She’d been trying to reach Mike all morning, and asked Mike some probing questions about where he worked, which office, and how long he’d been there. She ended the call abruptly. When Mike tried to call back a few minutes later, she didn’t pick up.

“It’s over,” he said to Andy, who was riding shotgun.

“I work for Burson-Marsteller,” said a woman’s voice. “What office are you with?”

“Who hired you?” asked the woman.

“Uh, a man named, uh, Jack Parent,” Mike improvised. “He hired me, you know, on a special project. Very special.”

“There’s no Jack Parent,” said the woman. “Who are you really?” Then she hung up.

“They figured us out. It’s over,” said Mike.

We’d spent months planning this action. Not only was it an amazing opportunity to test out our theory of what’s holding us back from a sane climate policy, it was going to be the final scene in our new movie, The Yes Men Are Revolting. We’d built the entire movie around this scene. We had no more time—and, more importantly, no budget—to come up with a whole other ending. But we decided to continue to Washington anyhow.

Then, 15 minutes outside of D.C., Mike got another phone call.

“Still on schedule? What time can we expect you at the hotel?” Doreen asked.

Slowly, it dawned on us what had happened.

Unable to reach Mike, Doreen had called Burson-Marsteller to find out where he was. To get to the bottom of it, the public relations people had called Mike. But following that, they hadn’t gotten in touch with Doreen.

At the conference the next day, Andy, wearing his ridiculous wig, ascended the podium as Benedict Waterman, undersecretary of policy implementation for the Department of Energy. Doreen, though suspicious, did not intervene.

“On behalf of the Department of Energy, I am very excited to announce that we are today beginning a process that will convert the United States energy grid into one that’s powered entirely by renewable sources—and we’re going to do it in only slightly more time than it took to win WWII,” Andy announced. The joint DOE/DOD plan, he said, would be called AmeriCAN, the American Renewable Clean-Energy Network, and would involve dismantling the fossil fuel companies, and putting ownership of the new, clean power facilities in the hands of communities.

Andy explained how converting to renewable energy would create millions of jobs, eventually save half a trillion dollars per year on healthcare costs, result in lower energy costs and greater price stability, and—bonus!—give our civilization a chance of surviving well into the future. More applause.

Andy also noted another reason, perhaps more important from the DOE’s point of view, for why AmeriCAN was needed. He pointed to a slide showing protesters blocking the Keystone XL pipeline. “A revolutionary energy program today is easier than a real revolution tomorrow,” Andy intoned—and received yet another round of applause.

Finally it was time for “Bana Slowhorse”— actually Gitz Crazyboy, the Canadian Tar Sands activist—to take the stage on behalf of the Bureau of Indian Affairs. Gitz, who stands about 6-foot-2, was dressed like a “Hollywood Indian,” with a huge black “Billy Jack” hat. He told the audience he was a member of the Wannabe Tribe, in a native joke from the 1970s by Oneida comic Charlie Hill. No one got it.

Gitz described how AmeriCAN would at long last put an end to the disease of fossil fuels, imposed like smallpox on his people—and, of course, on the whole world. His disturbing, moving speech combined fabricated pan-Indian mythology with heartwarming but equally bogus anecdotes—but the core message was completely sincere: A revolutionary energy program was truly the way to ensure that our generation would be remembered not as the one that watched the world swirl counterclockwise down the toilet, but as the one that finally put an end to the unlimited greed at the root of the Indian genocide and, now, planetary destruction.

Gitz asked everyone to rise and form a circle. He showed them how to link arms the “traditional” Indian way: If you’re standing next to a man, grab on his belt loops, ready to tug it up tight in case he begins to stray from the path.

And then, as Tito began singing his strange song, the defense contractors, law enforcement officials, retired generals and admirals, and even a former Navy Seal and aspiring Republican Congressman Larry Wilske danced together in a huge circle, some of them sporting special headbands with “Native Headband” emblazoned across them, and adorned with a little plastic windmill. They danced enthusiastically, for renewable energy and revolution.

Afterward, two dozen Homeland Security Congress attendees gave their business cards to Andy, Mike and Gitz, and told them about the emotion they’d felt, and how excited they were to be part of this great historic moment.

Perhaps we shouldn’t have been so surprised that, given the option, even those we consider opponents would join in on an evidently sane plan to save the future. After all, it’s not security or defense contractors who are blocking enlightened climate policy. Purely out of security concerns, the military has actually been converting its own bases to renewable energy, so that they can stand alone if the whole grid goes down. The Pentagon has even published studies about climate change and its dire security implications, and has lately become somewhat vocal about the inevitable violence that will come if we fail to stabilize the climate. Maybe that’s why the GOP-controlled U.S. House of Representatives passed an amendment to the National Defense Authorization bill that blocks the DOD from even talking about climate change.

The lesson we take away is that only a tiny handful of people stand on the other side: namely, the fossil fuel companies, their lobbyists and their cronies in Congress.

This doesn’t make the fight any easier. It doesn’t mean we can achieve sane policy without revolution; after all, fossil fuel companies are some of the richest companies in human history. But it does mean that the revolution is certain to succeed, since at least 99.9 percent of us are arrayed on this side of the struggle.

Andy Bichlbaum and Mike Bonanno, respectively Jacques Servin and Igor Vamos, are The Yes Men, a culture jamming activist duo. Their most recent film is The Yes Men Fix the World.