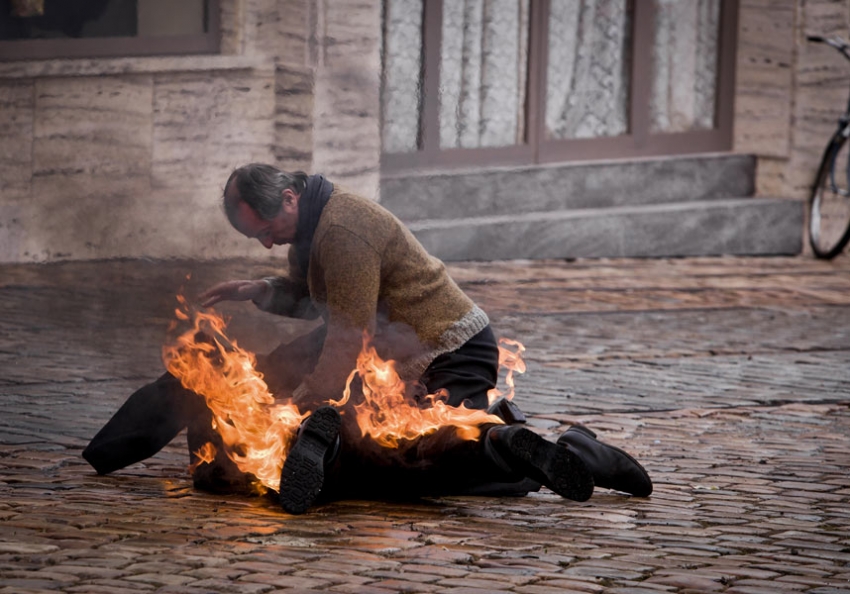 Burning Bush chronicles a 1969 political action that changed the course of Czech history.

A new film takes a rare look behind the Iron Curtain.

It’s a massive story of secret heroism, perfect for pop cinema—and with Holland’s film, the time for movies to explore it may be nigh.

Pungent history through it is, the Iron Curtain period is still a subject rarely addressed by European filmmakers. Perhaps the scabs are still too tender, even a full quarter-century since Communism’s official fall. Do too many complicitous and/or complacent alumni of those years still occupy seats of cultural influence? Eventually, through attrition, there will be a cataract of films, uncovering mid-to-late century stories the cultures kept secret for so long.

This scarcity at present backlights the achievement of Agnieszka Holland’s new mega-opus Burning Bush, made as a mini-series for Czech television. It limns a scorching chapter in the historical struggle of 20th-century Europe, one of which we Americans might be entirely ignorant but which for Warsaw Pact citizens, and Czechoslovaks in particular, was a lightning strike, a radical moment that galvanized an entire strata of society: the self-immolation of university student Jan Palach in Prague’s Wenceslas Square on January 16, 1969. The previous September, Ryszard Siwiec, a 59-year-old Polish accountant, had set himself aflame in a stadium in Warsaw. Both were protesting the Soviet tanks invading Czechoslavakia in August 1968, ending the Prague Spring.

The Polish government successfully buried the Siwiec incident, and the sympathetic sacrifice went undisclosed for decades. Not so with Palach, whose closer-to-home suicide was un-disappearable. Palach (a briefly seen character in Holland’s film, despite his role as the story’s axis) was followed by several other self-immolations by protesters who dedicated themselves as “torches.” So the Party leadership, unable to pretend Palach didn’t exist, did what it could to discredit the 20-year-old martyr and let the public memory of him slip away.

This dynamic provides the meat to Holland’s film, which follows a dozen or so characters through the fallout, as elusive government bigwig Vilém Nový (Martin Huba) slanders Palach, inciting a lawsuit for libel brought by Palach’s grieving mother (the potent Jaroslava Pokorná). The lawyer hired by the family to plead the case, Dagmar Burešová (Tatiana Pauhofová), is the movie’s ascendant protagonist, as she quixotically struggles to make the justice system work against a wall of corruption, espionage and threats to her family.

The script, written by first-timer Štĕpan Hulík, is structured around this legal procedural format, but it’s Holland’s visual and narrative grace that maintains the momentum. Still revered for the mysterious immediacy of art-house hits she’d made starting in her 30s, including Angry Harvest (1985), Europa Europa (1990) and Oliver, Oliver (1992), and deserving of more attention for the films she's made in America since then—particularly The Secret Garden (1993) and Washington Square (1997)—Holland has been busy for the past decade directing American TV (The Wire, Treme). Here, in Burning Bush, she’s in classic form, allowing the characters’ alarmed gazes to control the drama, from the senior detective (Igor Bareš) who becomes slowly aware that doing his job will result in the end of his career or life, to Palach’s tired old mum, who realizes too late that the price she’ll pay for defending her dead son includes virtually everything.

Defining the narrative, and therefore history, is what’s at stake, and what bubbles under the surface of Burning Bush is the reality of how totalitarian states’ “official stories” never last. Starting with Palach’s half-million-strong funeral parade (predictably met with military violence), and continuing under the radar for years, underground resistance in Czechoslovakia never relented. Burešová survived despite her recalcitrance (becoming a “post-November” minister of justice, and chairwoman of the Czech National Council) and her seemingly pointless crusade helped to prevent Palach’s vestiges from vanishing forever. Finally, as Burning Bush’s anthemic final scenes reveal, the anniversary of the self-immolation in 1989 was the occasion for a week of massive, violently met protests—what came to be called “Palach Week.” This was the beginning of the end of Communism in Czechoslovakia, and the Velvet Revolution arrived before the end of the year. It’s a massive story of secret heroism, perfect for pop cinema—and with Holland’s film, the time for movies to explore it may be nigh.