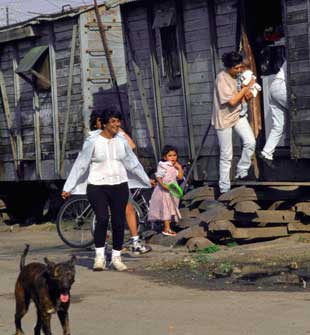 An energized Argentine democracy is holding its own against the IMF, but for how long?

Buenos Aires—You will not read about Luis Bianchi’s views in mainstream Western press accounts of Argentina’s tough negotiations with global financial institutions. Luis Bianchi drives his battered black and yellow taxi here, for 12, 14, sometimes 16 hours a day, with an hour or so off for the early afternoon meal. He is 75 years old, but he is too poor to retire.

“I hope to work for another five years, until I’m 80,” he says. “The government will then stop renewing my license. But by then we should be able to get by.”

His wife, who is 62, has a low-paid government job. They are helping out his three children, one of whom is part of the estimated 19 percent of the country who are out of work. Another 15 percent of Argentines are underemployed; 44 percent live below the poverty line.

Luis Bianchi is a well-spoken, clear-thinking man who does not have an ounce of self-pity. He has an interesting and nuanced view of Argentina’s $180 billion in foreign debt, which is presently the subject of talks among the Argentine government, international banks and bondholders, and the International Monetary Fund (IMF)—which is playing an even more wicked role here than usual.

Luis Bianchi is not happy that his government in 2001 defaulted on about $100 billion in bonds, the largest default in history, and he feels guilty about individual investors. He is clearly the sort of man who honors his own obligations, as he did when he bought his taxi 20 years ago.

Luis Bianchi does not say Argentina should not pay 100 percent of the defaulted debt, or that they will not pay it; rather he echoes President Nestor Kirchner in saying the country simply cannot pay. He would remind bondholders (most of them European) that investing does mean risk, and that the big investment firms that advised them to buy are also responsible.

Anyone returning to Argentina after a long absence is astonished at how poor the country has become. Buenos Aires, once the Paris of South America, has a faded, rundown, unpainted air, and provincial cities, like Tucumán and Santiago del Estero in the north, are even worse off.

Over the past few decades, the shantytowns known as villas miserias (villages of misery) have expanded; you see them now along the Rio de la Plata and on the road to the national airport. It is the equivalent of tens of thousands of people in shacks along, say, Manhattan’s West Side Highway.

What were obviously once middle-class people are now stationed here and there in the once-fashionable center of Buenos Aires, surviving as street vendors or even by outright begging. Underemployed people of all ages stand all along the Calle Florida, the chic pedestrian street, handing out fliers to earn a few pesos. Bands of cartoneros, sometimes entire families, live by collecting waste cardboard for resale.

Yet despite the new shabbiness, Argentina today is not a defeated place. People are out demonstrating in the streets nearly every day—for an end to impunity for the military criminals who tortured and murdered during the U.S.-supported dictatorships in the ’70s and ’80s, against the rising rate of common crime today, for an increase in the old-age pensions that have been reduced to a pitiful level during the crisis.

The tall buildings that house international banks in downtown Buenos Aires no longer have windows at ground level. They are instead encased in metal armor, as protection against groups of former depositors, armed with hammers, who regularly create a raucous din, still infuriated at losing two-thirds of the value of their savings in the 2001 economic collapse.

Normally, it is hard to organize the unemployed, who are dispersed and dejected. But here in Argentina the movement of the piqueteros (literally, the picketers) has had tremendous success in mobilizing tens of thousands to demand higher social welfare payments and, ultimately, jobs. Piqueteros march through the central business district and blockade highways across the metropolitan area. (Unfortunately, something of a backlash is emerging among those who are regularly inconvenienced by some piquetero direct actions.)

An energized public is probably the center-left President Kirchner’s greatest asset as he negotiates with international financiers. The talks continue, and Argentina will almost certainly reach an agreement with the bondholders in the first few months of 2005.

Alan Cibils, an Argentine economist who lives here but works with the Center for Economic and Policy Research in Washington, estimates bondholders will in the end receive about 50 percent of the value of their original investment. He says President Kirchner has politely reminded American officials that holders of Enron bonds only got back 14 cents on the dollar after that corrupt enterprise defaulted.

But Cibils is worried that even after a satisfactory agreement with the bondholders Argentina will remain vulnerable. “The public debt will still be roughly $130 billion,” he says. “That is between 90 and 100 percent of gross domestic product—still a potentially unstable level of debt.”

Cibils, like Argentinians generally, has especially harsh words for the IMF, which is very publicly pressuring the government to come to terms with the bondholders. He points out that the IMF, which is supposed to work as an “objective arbitrator,” is actually largely responsible for the awful economic advice and some of the bad loans that contributed greatly to the crisis in the first place.

Back in the ’90s, Argentina was regarded as a model student of the IMF and praised with sickening regularity in The Economist and the rest of the global press, even though unemployment has been in double digits since 1997. After the 2001 collapse, the mainstream globalizers tried to back off, hypocritically blaming Argentine governments.

Now, without IMF advice, Argentina is in fact steadily recovering. Growth is estimated at 8 percent this year, and the government is actually running a budget surplus. But now the IMF wants Argentina to use that surplus and give priority to international bondholders over its own citizens, some of whom are desparately hungry.

Argentina’s stagnation over the past 50 years has no single cause. But one major factor has been agricultural protectionism in the West. Europe, and to a lesser extent the United States, have kept Argentina’s chief exports, beef and grain—a clear violation of “free trade” that the IMF has not been particularly noisy about.

Alan Cibils thinks Argentina has nothing to lose by breaking with the IMF and continuing to manage its own recovery. But no country has ever defaulted to the Fund, and Cibils realizes Argentina would be completely on its own, with no real support from Brazil, Mexico or other Third World nations. He expects the government to give in to the Fund in the end.

Argentina’s isolation is a sad sign of the decline in the international anti-globalization movement that followed 9/11. Once, the IMF’s terribly unfair policy would have gotten world attention, and been attacked in noisy demonstrations elsewhere. But no longer.

So far, Argentina’s crisis has not prompted calls for a return to dictatorship; democracy is proving remarkably resilient. But for how long can any country endure mass unemployment and continued decline without the eventual danger of murderous extremism? Meanwhile, 75-year-old Luis Bianchi continues to work 12-hour days, and considers himself lucky that he has a job.

James North has reported from Africa, Asia, Latin America and the Middle East for more than 25 years. He lives in New York City.