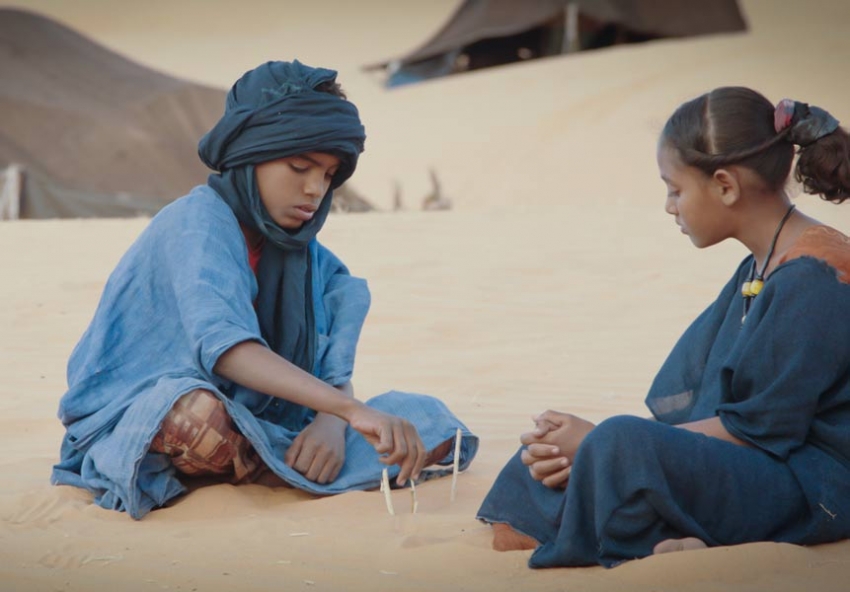 Despite a Rosy Lens, Timbuktu Has Something to Teach Us About Resistance to Oppression

Abderrahmane Sissako’s Oscar-nominated film may be improbably beautiful and relatively apolitical, but it’s worth seeing.

Instead, cinema is used as a social weapon, to defy power and express the reality of Third World peoples.

Mauritanian director Abderrahmane Sissako’s new, Oscar-nominated film, Timbuktu, is a gorgeously simple take on a madly complex subject: the 2012 descent of Islamist militants upon Mali. The Islamists, including al-Qaeda in the Islamic Maghreb, betrayed the Tuaregs after assisting their rebellion in the north of the country. They instituted sharia law and began a siege of persecution and torture that lasted the good part of the year before they were ousted by the country’s army and French forces.

But Sissako leaves the politics out. Except for the film’s title, we’re given precious few clues as to where we are and what spurred the Kalashnikov-toting jihadis to embark on their crusade. Mostly, we’re presented with a ravishing landscape that looks much as it has for millennia, forcibly confronting the modern age. The movie is shot in the desert wilds of next-door Mauritania, and we never see a city of any kind. Likewise, the film focuses on humble, old-fashioned, subsistence-worker Malians as they weather the absurd impositions and pious violence.

Which isn’t severe; Sissako’s film goes easy on the Islamists’ actions. They most often cajole and threaten, and sometimes wither in the face of local recalcitrance. A hair-raising stoning late in the film is briefly glimpsed, but the film otherwise concerns itself with the simple absurdity of these men coming to these desolate places and insisting on these ridiculous rules. For their part, the militants are not always sure of themselves, and at least one of them is a shrugging opportunist, sneaking cigarettes and using his new power to try to get close to the wife of a herdsman. (When he tells her, smiling, that she should cover her hair, she simply tells him not to look.)

The film’s rhythm doesn’t build to a crest of outrage, or even follow a straight narrative. Rather, it unhurriedly bops from one scenario to the next, tracking the downward spiral of the herdsman (a loving family man guilty of manslaughter, in an incident unrelated to the jihadis), but digressing to other scenes and gentle acts of resistance. The Islamist leader and the kindly local imam debate jihad in a serene, eloquent and intelligent exchange. Soccer is outlawed, so players kick an invisible ball. Singing is outlawed, so the Malians sing and dance in praise of Allah, leaving the militants comically confused.

In this way, Sissako’s film falls squarely in the relaxed tradition of African cinema as pioneered by Senegalese master Ousmane Sembene decades ago, and in the precepts of what’s known as “Third Cinema.” Begun as a protest movement among Latin American filmmakers in the late ‘60s, Third Cinema (Hollywood-style film is First, and post-war art film is Second) made an aesthetic point out of not following narrative rules. Instead, cinema is used as a social weapon, to defy power and express the reality of Third World peoples.

Timbuktu doesn’t manipulate or congratulate the viewer, but in its calm, wide-eyed way simply sits with the persecuted, lets the locals strut, has tea with the average man. Details come and go, sometimes without exposition: A free-spirited animist woman in rainbow-colored garb faces down a Jeep of militants—a moment with no blowback that we see. Early on, the jihadis handle a kidnapped European man, and even take note of daily medication he requires, but he’s never seen again.

Despite dialogue in six languages, Timbuktu also makes no mention of the historical animus among the Arab population, the nomadic Tuareg and Mali’s darker-skinned sub-Saharan ethnic groups. Both the civilians and the jihadis in the film appear ethnically mixed, and the only political conflict Sissako acknowledges is between the maddened present and the treasured past. One of the militants’ more graphic outrages is using antique icons and statuary for target practice.

Sissako can be romantic about his West Africa; Timbuktu’s golden sandscapes are as improbably beautiful as its people are sweet-natured. (Mali is crushingly poor, but here living in a tent and shepherding eight cows looks like the life of Riley.) But the filmmaker’s respect for Malians’ buoyant forbearance in the face of oppression is infectious. The jihadis did, eventually, fade away, just as the French colonials did, decades ago, and life has gone on.