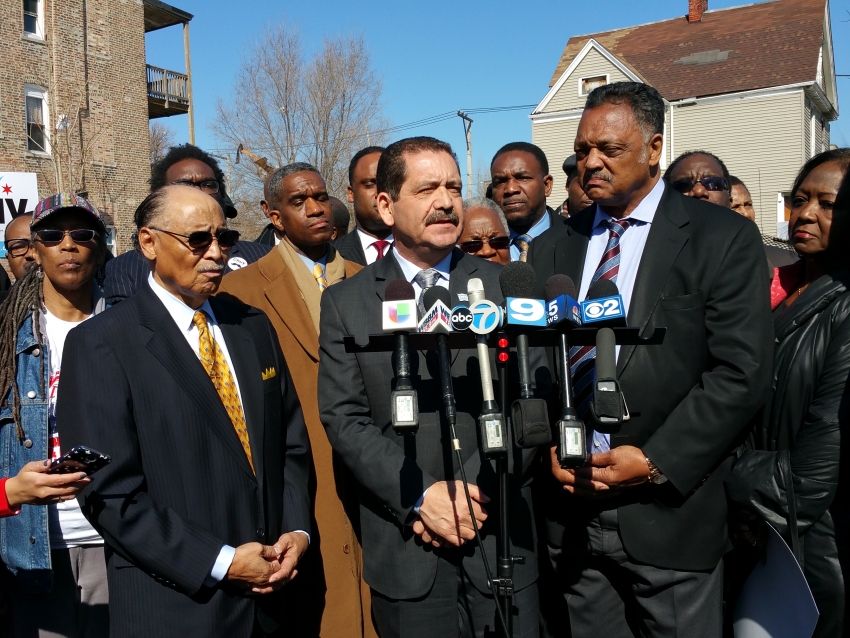 The Rev. Jesse Jackson's endorsement of Jesus "Chuy" García is a major boon for Rahm Emanuel's progressive challenger in the race for Chicago mayor. (Chicago for Chuy)

García could be on his way to building the cross-racial coalition needed to unseat Emanuel and become Chicago’s first Latino mayor.

“His entire life has been dedicated to working to help make the world a more fair, just and equitable place for all. I have no doubt that Chuy will be a great mayor for the city of Chicago,” said Congressman Danny Davis.

Citing the dilapidation and lack of development or investment in Chicago’s low-income African-American areas under Rahm Emanuel, Jackson chided the mayor: “We lose 50 schools, and 50 drug stores, and 75 grocery stores; thousands of vacant homes and abandoned lots.”

Of his decision to support García, Jackson said, “He has a consistent track record of service, and we trust him and believe that he will assume the burden of responsibility to work with us to reconstruct where we live.”

García is locked in a tight race with the well-funded but embattled incumbent Rahm Emanuel, whose $30 million war chest has so far appeared unable to blunt the momentum on his progressive challenger’s side.

Jackson was joined in his endorsement by a number of other black ministers, including Rev. Leonard DeVille. On Saturday, García was endorsed by Teamsters Local 743, a union representing 10,000 workers. And on Sunday, García gained the public support of Congressman Danny Davis, another prominent black leader in Chicago.

“Chuy García has spent more than 30 years advocating for progressive public policy in our city,” said Congressman Davis. “His entire life has been dedicated to working to help make the world a more fair, just and equitable place for all. I have no doubt that Chuy will be a great mayor for the city of Chicago.”

Davis’s endorsement is also significant as the congressman had previously thrown his support behind mayoral challenger Willie Wilson in the first round of voting, a businessman who was able to capture over 10 percent of the vote on February 24, and whose voter base was predominantly in the city’s African-American communities on the South and West sides.

Both García and Emanuel have been actively courting Wilson to receive his endorsement, and the former mayoral hopeful has already publicly stated that he plans to vote for García on April 7, though wants to consult his supporters before making a formal endorsement. This consultation has reportedly included several phone calls with new Illinois Republican Gov. Bruce Rauner, encouraging Wilson to back Emanuel. But Davis’s support could be key in this regard, helping to move black voters to García even if Emanuel manages to win over Wilson.

Capturing the city’s African-American vote over the next four weeks will be the key to determining the next mayor of Chicago, as recent polls have shown the race neck-and-neck, with 18 percent of voters undecided, many in largely African-American areas. In the last round, Emanuel received 42 percent of the vote in predominantly African-American wards while Garcia received 26 percent. The remaining 32 percent was divided between other challengers, including Wilson; both campaigns now see those votes as for the taking.

Emanuel’s support in the city’s African-American community has been cratering ever since the city’s first teachers strike in 25 years in 2012, as well as the mayor’s decisions to close 50 public schools largely in black and Latino neighborhoods, privatize public services and shut down public mental health clinics.

García has come out strongly against Emanuel’s policies in all of these areas, and has the backing of the powerful Chicago Teachers Union and its president Karen Lewis. However, longstanding tensions and distrust between the city’s black and Latino communities may be playing a part in keeping African-American voters from fully embracing García.

Of course, Mayor Emanuel has his own high-profile African-American supporter with great popularity in Chicago: President Barack Obama. But while Obama is still beloved in much of the city, his support for Emanuel in the last round (including a public event in the week ahead of the election and appearances in campaign ads) proved not enough to prevent the first mayoral runoff election in the city’s history.

Since the Feb. 24 election, Emanuel has sought to soften his image with voters through a new campaign ad many have read as a mea culpa of sorts for the mayor's brash style. This change in campaign approach appeared to be quickly contradicted, however, as Emanuel reportedly screamed at mental health activists in a closed-door session at a public meeting on Wednesday night, demanding they respect him.

If García's recent endorsements are any indication, he could be on his way to building a coalition across racial lines that would send him to the fifth floor of City Hall, becoming Chicago’s first Latino mayor.

By highlighting his close relationship with the late Mayor Harold Washington, Karen Lewis, as well as his boss, Cook County Board President Toni Preckwinkle (who has mulled publicly backing García but has so far stayed neutral), García can show the breadth of his relationship with black leaders in the city—and potentially pull off one of the biggest upsets in the history of Chicago politics.