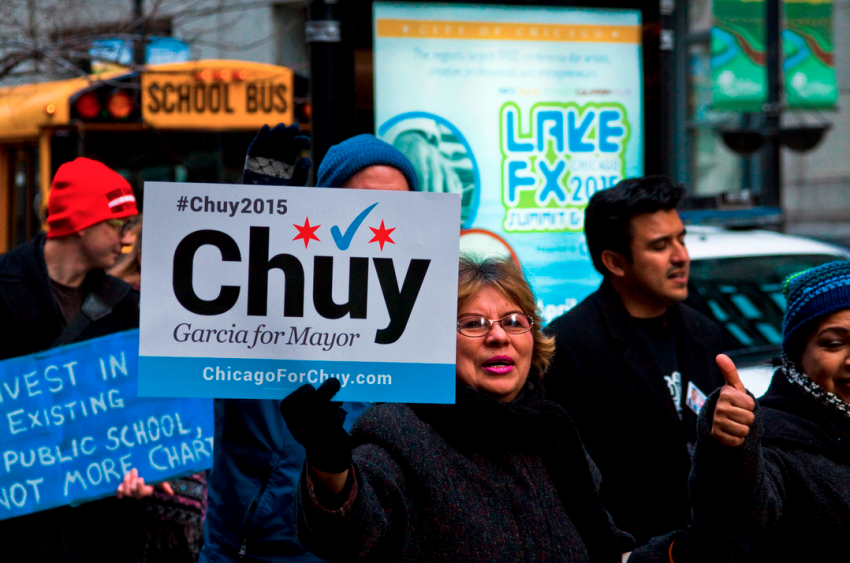 If candidates rise above “safe” poll-tested messaging and actually talk about the things that matter to people, progressives have a fighting chance of winning.

The more Chuy Garcia adopted a bolder progressive message in the run-up to the election, talking about the stark contrasts between his politics of community and solidarity over against Rahm’s pro-corporate, trickle down approach, the more the movement responded.

Despite the loss of Jesus “Chuy” Garcia to Rahm Emanuel in Chicago’s mayoral race, Garcia’s campaign helped grow and solidify a united, progressive left in Chicago. More than that, in the fight to reclaim the soul of the Democratic Party from corporate interests, this election has been ground zero. Emanuel may have won, but progressives showed that he wasn’t invincible. That should be inspiring news to people across the country who are hungry for progressive alternatives in the run-up to the 2016 elections.

The race started out as a sleeper. Garcia jumped into the contest late at the urging of the Chicago Teachers Union President Karen Lewis, who was exploring a run for mayor until she was diagnosed with a brain tumor. The energy of a potential Karen Lewis candidacy had evaporated and activists were mostly on the sidelines. Garcia had very little money, a fledgling organization and virtually no presence on television or in people’s mailboxes. He ran on a fairly safe and somewhat centrist message. In the primary, Garcia garnered just over a third of the vote.

But the primary served as a referendum on Emanuel’s tenure. A whopping 55% of Chicagoans voted against Rahm Emanuel and for one of his four challengers. Despite many polls and predictions showing Emanuel winning outright, he was forced into a two person run-off.

In the last six weeks, momentum for Garcia grew. The more he adopted a bolder progressive message, talking about the stark contrasts between his politics of community and solidarity over against Rahm’s pro-corporate, trickle down approach, the more the movement responded.

As we look towards 2016, progressives can draw four key lessons from movement we built and the rise and fall of “Chuy” Garcia.

The first lesson progressives can learn is that people are ready to reject corporate-driven austerity politics. Much like the election of Bill de Blasio in New York, Kshama Sawant in Seattle, the Syriza victory in Greece, and the rise of Podemos in Spain, the vote in Chicago is indicative of widespread and deep dissatisfaction with the corporate austerity agenda. Rahm Emanuel has pursued four years of austerity cuts to schools, libraries and health clinics paired with privatization schemes and big-ticket corporate handouts. At the same time, what’s left of government is funded by nickel-and-diming working people through fines and fees like red light cameras.

Buoyed by the runoff and pushed by progressive forces to run on his bonafide progressive credentials, Garcia increasingly articulated a scathing critique of Emanuel as the agent of Chicago’s corporate elite working against the interests of regular Chicagoans. Garcia campaigned against pay for play contracts, corporate giveaways and privatization schemes and he juxtaposed them against Emanuel’s closures of schools, health clinics and libraries.

Polling shows that people are angry about growing economic disparity and the intractable economic crisis. At some level, people recognize that a class war is being waged against them—and they know they’re on the losing side. They want politicians who will fight for them. This is a major reason so many people stay home in most elections. They know no one running for office cares about them, much less actively fights for their economic interests.

The Chicago mayoral election was an indication that if candidates rise above “safe” poll tested messaging and actually talk about the things that matter to people, voters will engage and progressives have a fighting chance of winning. In the process, the progressive movement that can be built around a candidate can be enlarged, emboldened and united.

Second, this election demonstrated the potential of people power, even against obscene disparities in campaign funding. Overall, Emanuel outspent Garcia 8-1 and until the last month of the campaign the money advantage was completely lopsided, evidenced in the almost daily mailers and hourly television ads for Rahm compared to virtually no mailers or television for Garcia. Even at the end, Garcia never came close to matching Emanuel’s air war. The race hinged on how many boots Garcia could put on the ground. Volunteer field for Chuy came late but grew exponentially during the runoffs as the sense of possibility grew and his message grew decidedly more progressive.

Reclaim Chicago alone was able to mobilize more than 9,000 volunteer hours, many of which came from people who had never before engaged politically. Progressive groups like MoveOn, the Daily Kos, Democracy for America, the Working Families Party, the Progressive Change Campaign Committee and National People’s Action Campaign mobilized volunteers from around country to make calls for Garcia.

People power can prevail over money but it will require organizing more people, forging closer partnerships and doing more grassroots fundraising. It also requires that we take campaign finance reform seriously. In order to give movement candidates a fair chance, we must level the playing field.

Third, this election demonstrates the need to significantly alter the way we do politics. Elections need to be about people’s values and issues, not parties and personalities or safe, poll tested messaging. And we must create independent political organizations that operate continuously rather than simply closing up shop the day after the election.

Reclaim Chicago began all its conversations by asking voters about people’s own community, values, and concerns. From there, we were able to share a basic analysis about corporate power and the austerity agenda. We pointed to our national People and Planet First Agenda. The response was phenomenal. We found that people are relieved to know their potholed streets, their closed schools or their unemployment is not their fault or even simply an individual misfortune, but part of a pattern that is driven by intentional policies. This analysis gives people a chance to get angry and fight rather than merely feeling depressed and defeated. Volunteers frequently reported inspiring conversations, and voters engaged on the phone or on the doors joined our campaign by volunteering themselves.

Reclaim Chicago plans to spend the time between election cycles engaging these voters and volunteers in issue work and legislative campaigns so that future election cycles are clearly linked to their values. And we plan to launch an issue-based agenda within a month of the election to engage volunteers and activists in the policy fights that will shape upcoming county, state and federal elections. New leaders will be trained and potential candidates will be identified. And we aren’t the only new organization in Chicago that will be doing this. We look forward to working with and alongside United Working Families, another new independent political organization that has a long-term plan to build political power in Chicago.

Finally, this election was about race. There was a consistent narrative from the Emanuel camp that electing Garcia would consign Chicago to the same disinvested and depressing fate as Detroit. And there were a number of white and African-American voters who agreed with our analysis and disliked Emanuel, but simply succumbed to the suggestion that a Mexican American could not be trusted with complex financial and administrative decisions.

Despite the fact that Garica lost both the white and African-American vote to Emanuel, there were positive signs to build upon. In the runoff, many African-American leaders endorsed Garcia, and his support from the African-American community increased strongly, though he did lose the majority of the city's black vote. And most of Garcia’s white support came from working-class areas. The activist movement itself became increasingly multi-racial and grounded in the working class. Clearly, this is the movement that must be built upon to withstand race-baiting attacks and assaults on the unity of the working class.