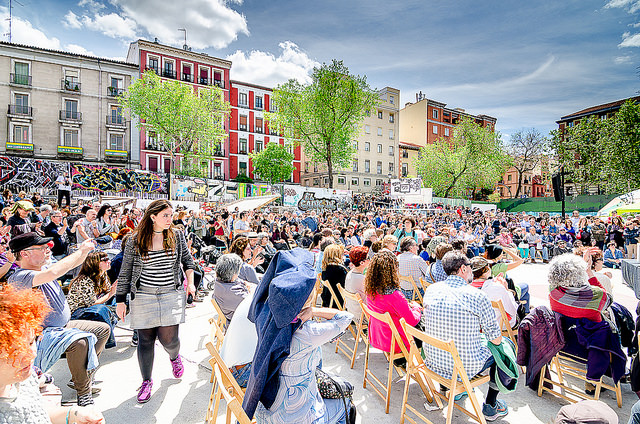 The Prospects for Radical Democracy in Spain

The upcoming municipal elections will be a key test for the rising leftist movement in Spain.

"This participatory ethos is the heart and soul of the confluence candidacies: from online primaries to configuring electoral rolls to the collective composition of the party’s platform through open assemblies in each neighborhood."

“Do you hear the buzz? The buzz says: let's defend the common good.” These are the lyrics of the campaign song of Barcelona en Comú–one of the new “confluence” platforms of “popular unity” running in the May 24th municipal elections in Spain, sung (with the help of autotune) to the rhythm of a popular Catalán rumba by its candidate, Ada Colau. According to pre-election polls, Colau is poised to win the mayoral election in Barcelona this Sunday.

Colau is part of a rising electoral insurgency across Spain by candidates trying to reimagine radical democracy, drawing from social movements to create a new participatory style of “governance by listening.” Four years ago, the May 15 movement appeared during the campaign for municipal and regional elections. Then, the characterization of the movement by many politicians and mainstream media oscillated between patronizing and condescending, along the lines of, “If these kids want to achieve anything, they should organize a party, and run for elections.”

Four years later, the political landscape has changed. As a popular slogan puts it, “Fear has changed sides.” Or perhaps happiness and hope have changed sides, as Spaniards finally have a political alternative to austerity. The emergence of PODEMOS in the European parliament elections one year ago was the first electoral manifestation of a growing political shift to the left in Spain. The buzz could be heard by anyone in the streets, in the plazas, in every mobilization in defense of public education and healthcare, in every neighborhood. Today, several cities and numerous smaller towns are running candidates from these new political parties, with elections on May 24.

From outside of Spain, it’s easy to conflate all the post-15M new electoral alternatives under PODEMOS. But the reality is more complex. On May 24, there will be two elections in Spain. One is the regional elections, which will take place in every “autonomous community” (the Spanish term) except four. PODEMOS is running electoral candidates at the regional level. This process has shown a rich diversity among the party itself. Pablo Echenique, for example, is now running for the Aragón regional government. Nicknamed “the other Pablo of PODEMOS” (in relation to Pablo Iglesias, PODEMOS's Secretary-General), Echenique is prominent within the party as a strong advocate for participatory methods in constructing the party’s program.

At the local electoral level, a series of experiments in constructing movement-influenced electoral platforms are taking place. In these so-called “confluence” processes, PODEMOS is one force among many. Confluence forces have become important new players in the upcoming local elections. In addition to the aforementioned possibility of a mayoral victory in Barcelona, polls this week point to a technical tie in Madrid between the ruling Popular Party and Ahora Madrid (loosely affiliated with Podemos), which would allow its candidate, Manuela Carmena, to become mayor of the capital city with the support of other forces. There are similar possibilities for parallel initiatives in other major cities throughout the country: Zaragoza en Común, València en Comú or Málaga Ahora, among others.

What does this confluence mean? How does it work? What are the ingredients of these new municipal initiatives? The “confluence candidacies” bring together a wide spectrum of participants: from grassroots activists to members of Left political parties, from well-known scholars to common citizens from diverse professional backgrounds. Rather than reproducing the traditional “electoral coalition” model (the tactical merger of a group of parties that preserve their strong, visible identities), the confluence logic is based on the idea of the “non-hierarchical encounter.”

Take, for instance, the case of Barcelona en Comú. The parties and individuals willing to join this initiative agreed to a “Code of Political Ethics,” which had been previously discussed, amended and approved in an open, online debate. This participatory ethos is the heart and soul of the confluence candidacies: from online primaries to configuring electoral rolls to the collective composition of the party’s platform through open assemblies in each neighborhood. No longer a top-down politics of opaque pacts and closed policy platforms, but an open-source process based on grassroots collective participation.

Manuela Carmena and Ada Colau themselves are good examples of the heterogeneity of the people involved in these political experiments. Carmena, a 71-year-old retired judge, has a long history of political judicial work, from her involvement with the clandestine movement of labor lawyers involved in the anti-Francisco Franco workers' movement to her later defense of inmates’ human rights in Spanish prisons, or her work to guarantee social housing to evicted people in Madrid. Colau is a 41-year-old social activist, co-founder and former spokesperson of the PAH (Platform for People Affected by Mortgages), undoubtedly one of the most tenacious and innovative grassroots social movements developed in Spain during the recent economic crisis.

The generational span and complementary trajectories of Carmena and Colau hints at the dialogue between different activist traditions underlying these municipal movements–as when Carmena praised the contributions of the squatter movement in Madrid or Colau reclaimed the memory of the proletarian neighborhood struggles of the 20th century in Barcelona.

Both Carmena and Colau were elected through open and participatory processes, and both have put into practice a logic of leadership that looks quite different from traditional electoral spectacles and entrenched authority. As Colau argued in a recent interview, participation has to be understood “not as a top-down concession but as a way to rule,” thus it is necessary to develop non-patriarchal modes of leadership inspired by feminist and ecological thought. Similarly, Carmena has repeatedly criticized traditional political rallies, instead promoting what she calls close “encounters” with neighbors.

“Ahora” (“now”) and “En Comú” (“in common”) have been recurring themes in most confluence candidacies. On the one hand, “Now” summarizes the sense of urgency in recovering basic social rights and, more so, overturning the neoliberal model of urban growth that has been the model for Spanish cities over the last decades. After almost 25 years under conservative rule, Madrid has become one of the most aggressive laboratories of neoliberal privatization throughout Europe, propelled by a conglomerate of political power, major construction companies and financial interests–repeatedly proven corrupt–that have overtaken basic public infrastructure such as hospitals and water access.

The apparently kinder, social democrat/nationalist-ruled model of Barcelona is perhaps one of the most exemplary cases of the effects of branding in a city's everyday life: streets have been turned into shop windows for tourist consumption, while spectacular buildings coexist with one of the highest eviction rates in all of Spain. Confluence forces advocate for a profound shift in this model of urban development, rooted in social economy and sustainable practices.

On the other hand, “In Common” appeals to the demands for extended participation within the political institutions that 15M first put forward. The programs of these citizen platforms are packed with proposals for newer forms of political accountability, transparency and the use of both online and in-person assembly methods of deliberation in the elections of district representatives, among many other developments. Although focused on immediate needs, and thus pragmatic and realistic in many of their proposals, these programs also convey an open-ended character focused on defending and democratizing the public domain. These forces have an experimental character that goes beyond the anti-austerity Left’s usual reactive framework: in their combination of audacity, openness and realism, these new political projects represent not so much a simple “return of the Left”–or, at least, of the Left as we knew it–but the building blocks of a whole new political constellation.

The political scenario after the upcoming regional and municipal elections this Sunday remains uncertain, although some indications for major changes are at stake. If Ahora Madrid and Barcelona en Comú finally win the elections in the two major Spanish cities, what potentials and limits will they find operating at a municipal scale? Are Madrid and Barcelona at the brink of a new definition of municipal autonomy, popular empowerment and a grassroots reactivation of the right to the city? To what extent would a hypothetical new political landscape in the regional elections influence PODEMOS's strategy towards the November 2015 general elections, at a moment when many critical voices are reclaiming a critical examination of the “middle-classist” turn of the party?

PODEMOS started from the top tier of the European parliament elections to try to produce change at the state level, while these municipal confluence forces have started from the local level. The elections tomorrow and over the next few months will determine if these two distinct approaches can intertwine in order to prepare for the fall elections. Meanwhile, the buzz keeps getting louder.

Vicente Rubio Pueyo and Pablo La Parra are affiliated with the NYC to Spain delegation.