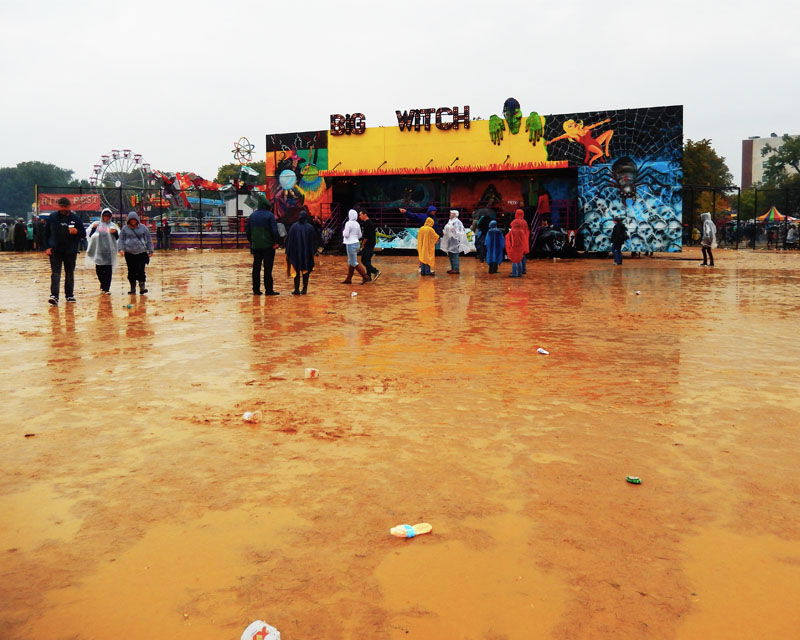 A photo from Riot Fest in 2013, in which the grass turf of Humboldt Park was turned into a mud pit. (swimfinfan / Flickr)

Why We Organized to Kick Riot Fest Out of Humboldt Park

Pushing the punk rock festival out of the park was a victory against gentrification and the privatization of public spaces.

Residents stood up against the privatization of their park by Riot Fest and won; they can stand up against the gentrification that is displacing the poor and erasing the presence of people of color.

Organizers of the punk rock music festival Riot Fest announced last week Wednesday that after three years in the Humboldt Park neighborhood on Chicago’s West Side, it would not be returning to the neighborhood in 2015. Instead, it is setting up shop in Douglas Park in the North Lawndale community.

Alderman Roberto Maldonado had come out publicly against the music festival after supporting it for the last three years and is receiving a lot of the praise (and criticism) about Riot Fest's announcement. But the alderman doesn’t deserve all of the credit. Grassroots organizing among the citizens of Humboldt Park led Riot Fest’s departure.

During this past election cycle, Grassroots Illinois Action-Humboldt Park Area (GIA-HPA), an independent political organization comprised of community residents, (full disclosure: of which I am a member) emerged as a powerful force in Humboldt Park. Intended as a venue for residents to organize around issues in the area, Riot Fest quickly became one issue members wanted to address. After three years in Humboldt Park, residents were tired of what we saw as the continued privatization of the park that not only left it severely damaged, but limited its usage for residents months after the festival.

Through collaboration with groups like Humboldt Park Citizens Against Riot Fest, GIA-HPA helped organize a mass of people that showed up to Alderman Roberto Maldonado’s ward nights, launched a public petition against Riot Fest, held a press conference in the park and came out in full force to the commissioners of the park board meeting. This continual pressure on Riot Fest and our elected officials ultimately led to the ousting of the festival.

What once seemed like an insurmountable goal against a multimillion dollar festival has come to pass, and it sends a strong message about the usage of our public parks. Throughout the city, we see corporations exerting more power over spaces that were initially intended to serve communities, not for profit-generating festivals.

From questions over a presidential library in historic South Side parks to concerns about the Star Wars Museum on lakefront parkland, city residents want parks that serve the people, not private interests. Despite our victory in Humboldt Park, we see its relocation to Douglas Park (without any community input) as a continual disregard of the rights of residents to their public parks. Festivals like Riot Fest should operate in venues that don’t encroach on public land. Residents of North Lawndale, the community that encompasses Douglas Park, are already meeting and discussing ways to address Riot Fest's arrival, and we will be supporting these efforts.

Despite the shortfalls of our victory, this outcome is also an important win against gentrification in Humboldt Park. In a gentrifying community, there is often an air of inevitability to changes, but through this fight residents were able to show that they don't need to take these changes lightly. Residents stood up against the privatization of their park by Riot Fest and won; they can stand up against the gentrification that is displacing the poor and erasing the presence of people of color. While our efforts are centered on our community, these issues are widespread.

Throughout the city, our city services are being privatized and communities are becoming inaccessible to the poor as new development caters to the wealthy. The idea of “building a new Chicago” never seemed less inclusive. Neighborhood by neighborhood, we are showing that that's not the Chicago we want to live in. We want a Chicago that doesn't only cater to the rich but the poor and working class. We are coming together and fighting for a better vision of Chicago.

Lynda Lopez is a member of Grassroots Illinois Action. She lives in the Humboldt Park neighborhood of Chicago.