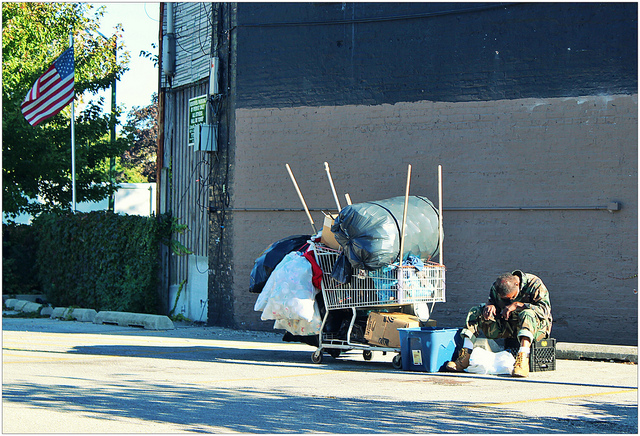 The city's recent pushout of Uptown’s homeless community only reaffirms its systemic commitment to recreation for the privileged over housing for the marginalized.

News that torrential downpours this week led Mumford and Sons to postpone its highly anticipated show in Chicago’s far North Side neighborhood of Uptown, the first in a summer-long outdoor concert series, was met with widespread understanding from loyal fans. Yet other community members could not treat rainwater as a simple nuisance. For Uptown's homeless residents, last week's rain flooded the pair of viaducts they call home, washing away tents, clothes and family possessions. And on Tuesday, city agencies, absent from the flooding relief efforts carried out by local charity groups, arrived at 9 a.m. to pack people and belongings alike into city agency trucks to “secure” the streets for Mumford's performance.

These provisions mandate that city agencies provide posted notice at least 24 hours in advance for regular off-street cleaning of homeless areas and seven days for deep cleanings, designate homeless people’s permissible “portable personal possessions” and outline a rigorous tagging procedure whereby residents must receive seven days before the next cleaning to discard or else relocate their property. Yet each cleaning risks widespread property loss for homeless communities and little access to legal recourse, despite each new amendment to the policies designed to protect them.

Homeless residents, who often have so little to begin with, must start afresh when clothes, shoes and government IDs are swept up by the city (to say nothing of the loss of irreplaceable items like photos of deceased loved ones). These residents must also contend with the hostility of neighbors that disdain their living situation in the viaducts.

In a rapidly gentrifying community where safety nets for homeless and transitional-living buildings like single room occupancy buildings (SROs) are closing and state social services have been gutted, homeless residents are caught in a double bind. Enter shelters, which are inadequate, crowded and unfunded by the city or state, and you risk contracting bed bugs, suffering assault and receiving mismatched or inadequate services amid the concentrated trauma of diverse homeless populations packed into close quarters. Stay on the streets, and even the aggressions of passersby, criminalization by the city and exposure to pillage and attack are somewhat countervailed by the supportive surrogate family of other homeless people.

Alderman James Cappleman of the 46th Ward has largely carried out the desires of the neighborhood’s fairly small but vocal and wealthy pro-gentrification population, who regularly blame homeless residents for supposed (and dubious) neighborhood problems like stunted economic growth. Noted more for preventing a Salvation Army truck from serving homeless residents than his origins as a social worker, Cappleman has helped spearhead the eradication of low- and mixed-income housing in the neighborhood, with homeless, poor and working-class residents seen as a barrier to his ward's affluent development.

Using the Illinois Homeless Bill of Rights, my fellow lawyers-in-training and I advocate for homeless people’s property rights by monitoring off-street cleanings and documenting incidences where property was seized and disposed of without due process. Time and again, we hear stories of city agencies' legal indiscretions, who, apart from property confiscation, refuse to inform residents about city or other local services, photograph their premises, compile name registries of residents, casually regard temporarily unattended items' as disposable, all in total ignorance of legal codes surrounding these processes.

The city's recent pushout of Uptown’s homeless community only reaffirms its systemic commitment to recreation for the privileged over housing for the marginalized. The comfort of 35,000 relatively wealthy lakefront guests for a Mumford and Sons concert who don’t want to be reminded of the existence of homelessness in their city appears to merit more protection than the basic dignity of homeless residents.

Nickolas Kaplan is a law student at Loyola University Chicago.