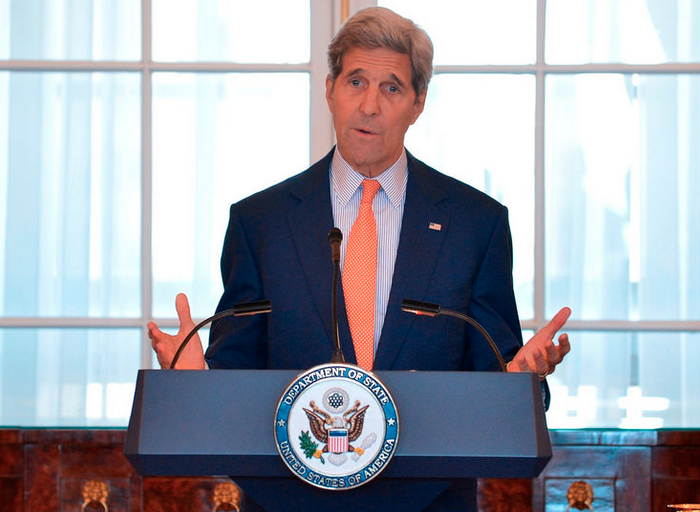 There is no place in Israeli geo-strategic thinking for a militarily and diplomatically powerful Iran—with or without the bomb.

Israel’s regional strategy is based on the concept that it is, and must remain, the sole regional superpower.

Let’s take Bibi Netanyahu at his word for a moment. Let’s assume that he genuinely believes Iran is hell-bent on developing nuclear weapons and that those weapons really do pose an imminent and existential threat to the survival of Israel.

This week, that threat was removed—or, at the very least, put out of the reach of the Iranians for a very long time. The four most powerful military-economic blocs on earth—the United States, the European Union, Russia and China—reached an agreement with Iran which, as Barak Ravid of Haaretz put it, will “put Iran’s nuclear program in deep freeze for the next 10 years, force parts of it into regression, and leave restrictions on it for a generation.”

The negotiators spent close to two years on the minute details of denuclearizing Iran and concomitantly lifting sanctions. But, important as those details are, they are not the clincher.

The decisive point is the fact that the Big Four powers are all full parties to the agreement. Or, to put it another way: The agreement is guaranteed by the combined diplomatic, economic and military might of every country of consequence on the planet. And they are all accountable for its success or its failure.

That is an historical achievement in the most literal sense of the world. I am not aware of any previous agreement in history that has been underwritten by a coalition of such breadth and power. Not even the World War II Allies came close. The diplomats who finally took their photo call on Tuesday were not toothless United Nations hacks; they were the foreign ministers of the world’s most powerful nations, representing their own countries individually and providing a collective guarantee.

And it’s worth remembering that Israel, however great its military capacity, is highly dependent on other nations. In 1973, only an emergency American airlift saved the country from imminent disaster, a situation that has been repeated, though with lesser degrees of seriousness and urgency in all Israel’s wars. During last year’s hostilities with Hamas, President Obama had to approve an emergency grant to replenish parts for Israel’s Iron Dome missile defense system.

Israel likes to think and pretend that it is entirely self-sufficient and self-reliant, but that is not the case. Even sovereign nations need friends and partners.

Personally, if someone was threatening to beat the shit out of me—or if I even imagined that was about to happen—I would be grateful for any help I could get. And if that help came from the leaders of the four toughest gangs in the hood, who also offered to stick around to make sure my tormentor didn’t return, I would be way beyond grateful.

But I am not Bibi, of course, and Bibi was not grateful. In fact, Bibi was spitting mad. The agreement, he said, was a “stunning historic mistake” that makes the world “a much more dangerous place today than it was yesterday.”

That is not rational, particularly when not even Netanyahu has denied that the agreement, at the very least, puts considerable distance between Iran and a nuclear bomb. The cute drawing that Bibi brandished before the UN General Assembly a couple of years ago, which showed Iran as being only a red line away from achieving military nuclear capacity, can be torn up and chucked away.

Those who know him would probably agree that he’s incapable of gratitude, but that’s neither here nor there. To understand what Bibi is really getting at, we need only look at the two key reasons he and his like-thinking colleagues have given for dismissing the agreement.

The first is that Iran will be able to build an arsenal of bombs in a decade or two. The Big Four powers deny that vehemently, but even if it were true, it would still be a lot better than achieving a bomb in another three months, wouldn’t it? Surely the rational response would be to welcome a short-term solution and work towards longer-term ones?

The second key point made by Bibi is that the agreement “will pump billions of dollars to the Iranian terror and war machine, which threatens Israel and the entire world.” In a similar vein, Education Minister Naftali Bennett said that Iran “will become a terror powerhouse in the next decade, because of the funds it will now receive.”

And there you have it. It is Iran as a regional powerhouse that really perturbs Israel. It was never about the bomb to begin with – certainly never about the bomb alone. Israel’s own nuclear arsenal has always been a more than sufficient deterrent to nuclear attack by Iran, and Bibi has known that all along.

What really concerns the prime minister—and has concerned every Israeli prime minister since the Sixties – is having a regional rival with the same deterrent capacity that Israel has. Israel’s regional strategy is based on the concept that it is, and must remain, the sole regional superpower. There is no place in Israeli geo-strategic thinking for a militarily and diplomatically powerful Iran, with or without the bomb.

That determination to remain on top has only increased in recent years with the fragmentation of the Middle East (civil wars in Syria and Yemen, the spread of ISIS) and the increasingly visible role played by Iran in many of the regional conflicts. While Israel can only play a minor and clandestine role in the current crises (the open support of Israel would be the kiss of death for any side,) Iran has come into its own. That threatens to unbalance long-standing Israeli strategy.

In fact, some Israeli officials complained after the deal was announced this week that the Big Four negotiators had limited themselves to the nuclear issue only – as if their brief had been to do Israel’s bidding and ensure that Iran was emasculated as a regional rival on all levels. That indeed has been Israel’s approach throughout the negotiations.

Israel will now attempt to get the agreement buried in the U.S. Congress. If that fails (and even if it succeeds), Israel will resort to the big shnorr, which has been its fallback position all along. America will have to pay big-time for its temerity in ignoring Israeli dictates in its dealings with Iran. The payback will come in the form of brand new, shining weapons systems for Israel—and lots of them.

What remains to be seen is whether Netanyahu has pissed off Obama enough to keep him from signing the checks.

Roy Isacowitz is a journalist and writer living in Tel Aviv.