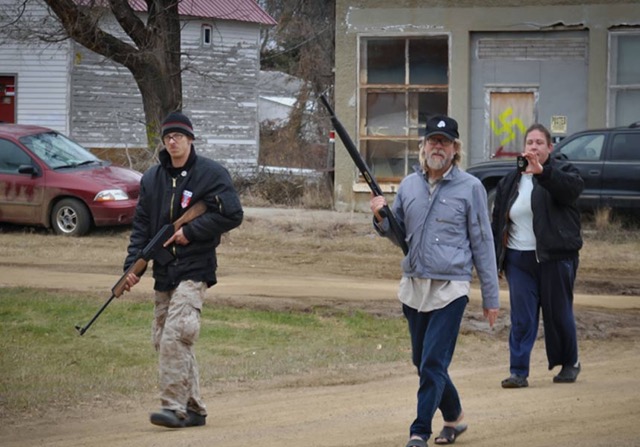 When one resident expresses doubt that Cobb will persuade anyone of anything, he screams back, shotgun in hand, 'I’m one of the most famous racists in the world!'

The new documentary Welcome to Leith is about one of America’s smallest towns—a North Dakota hamlet of three square miles, one functioning business (a bar), and less than a dozen families. This dot of humanity suddenly becomes a laboratory for huge moral and sociopolitical dilemmas that may have no resolution.

What happened was the silent and unnoticed entry into Leith of Paul Craig Cobb, in 2012, buying a shack, moving in and staying largely unseen. No one in town, from its part-time mayor to its single black resident, knew who Cobb was. A quick Googling, however, would have revealed him to be one of North America’s most infamous, vituperative and well-connected white supremacists. Prototypical keep-to-yourself Westerners, the Leithians were none the wiser. Cobb, an articulate, calm, wild-haired sexagenarian with black-rimmed glasses, had an express plan: to literally populate Leith with white nationalists, take over its town government, rename it Cobbsville and begin a racially defined community.

It was a moment “when the outside world that’s kept apart from much of rural America—something you didn’t even know existed—sort of came up through the soil,” says Ryan Lenz, a Southern Poverty Law Center staffer interviewed in the film. Soon, Cobb had bought up a number of properties in Leith, Nazi flags were staked on his front lawn, other self-defined neo-Nazis and supremacists had moved into Cobb’s extra houses, and the yards were patrolled with automatic weapons.

What would you do? The people of Leith went ballistic, and the almost biblical conflict that resulted is chronicled carefully in Michael Beach Nichols and Christopher K. Walker’s film. Cobb’s nemeses include mild-mannered farmer/mayor/bus driver Ryan Schock, neighbor and Iraqi war vet Lee Cook, and Bobby Harper, Leith’s only black resident. The Southern Poverty Law Center gets involved, protesters stream in from out of town, and the face-offs get hairy. Cobb and his cohort, however they pine for the extermination of Jews and blacks in media interviews, have not committed any crime, and have in fact only exercised the rights and privileges granted everyone in a democracy. The denizens of Leith react as if under siege, surveilling Cobb’s property (not hard to do; you could see it from any front step in town), and plotting out possible courses of action with the district attorney.

But Cobb doesn’t turn out to be the stealthy, insidious mastermind his plot suggested. Quickly, he and his reedy, Hitler-mustached sidekick, Kynan Dutton, begin harassing people at town meetings, sieg heil-ing on camera, and outrageously baiting residents. When one resident expresses doubt that Cobb will persuade anyone of anything, he screams back, shotgun in hand, “I’m one of the most famous racists in the world!”

Blood boils all around, until finally Cobb and Dutton confront townspeople with screaming epithets and loaded guns, and get themselves arrested in 2013 on charges of terrorizing. But of course the legal system proves to be a quagmire; prosecuting on the basis of someone’s “terrorized” feelings, and on the malevolence of someone’s ideas, is a shaky undertaking. Implicit in this ordeal, as you watch perfectly nice North Dakotans conspire to eradicate this snake in their garden by any means necessary, including violence, is a kind of ethical crisis, the kind normally reserved for revenge melodramas. You can see all of schizophrenic America at war with itself in these unpaved rural roads. The Leithians’ rising fury and frustration with their own laws nudges them closer to the intolerance they’re confronting—guardians and purifiers of community, come hell or high water.

Nichols and Walker had their way with Leith, accessing homes on both sides, conducting jailhouse interviews with Cobb (in which he appears very relaxed), using footage shot by both camps. In one sense, the story of Leith is heartening; the near-instantaneous antagonism toward Cobb, when we might have feared the opposite, can seem almost heroic. But the morality-play firefight between American individualism and the public good, and between two visceral brands of self-righteous hatred—one morally repugnant, both legal—rages on.

Welcome to Leith premieres in New York City on September 9 at the IFC Center.

11 Statistics That Show Racism Is Entrenched in Our Healthcare System