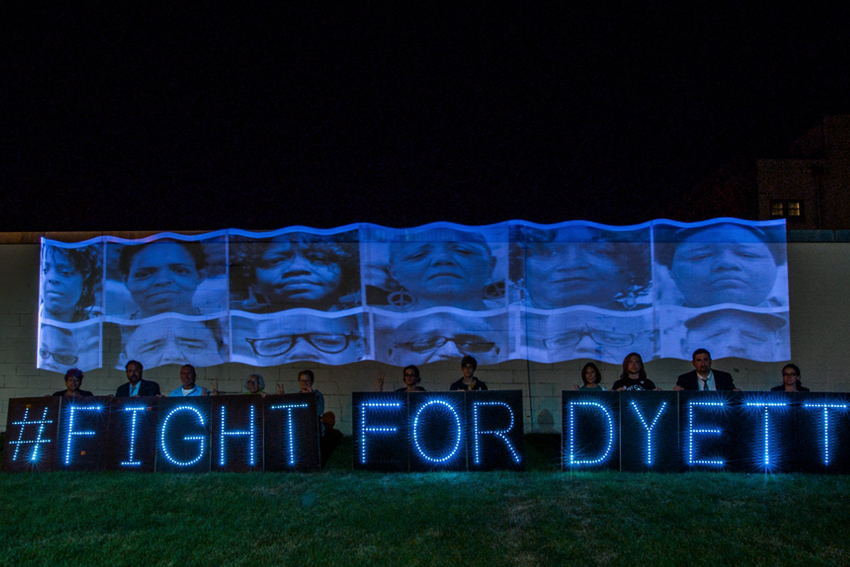 The hunger strikers aren’t just fighting to keep a school open—they’re fighting to transform a gentrifying Chicago neighborhood for the better.

After weeks of a hunger strike by 12 residents fighting for the predominately African-American Bronzeville’s Walter Dyett High School, two strikers were admitted to the hospital.

All this in an effort to make Chicago Public School (CPS) officials heed their plea: to end the privatization of education and to make Walter Dyett High school into a Green Technology community high school.

The hunger strikers are saying what needs to be said: that Black and brown children must be valued, their families must be valued, and their schools must nourish their inherit value.

The demands of the hunger strikers are easy to understand. They don’t merely want a re-opened school, as was finally agreed to by Mayor Rahm Emanuel and CPS last week after 18 days of hunger strike. They want a Green Technology community high school with parent engagement in decision-making from the beginning. Their plan for the new school was vetted by multiple education experts at the University of Chicago. The comprehensive plan presented by the community and the hunger strikers to CPS was “excellent and should be chosen,” said Jeannie Oakes, president of American Educational Research Association, AERA.

Why Walter Dyett High School was set up for closure by the CPS to begin with is difficult to understand. The school received awards in 2008 and 2011. First, for the largest increase of students going to college out of all Chicago’s public schools, and then the ESPN “Rise Up” award for small schools making great improvements, but in need of some help. The school won a $4 million athletic facilities renovation.

So what happened? In a part of town activists say is a target for gentrification, the school was closed before students even got a chance to enjoy the new facilities. The strikers called it “racism” and “systemic disinvestment.” “Our schools weren’t failing,” they said. “They were failed.” And Walter Dyett High School was set to become yet another victim in the closing of over 50 neighborhood Chicago public schools in favor of privately owned and managed charter schools, with poor records of achievement, no accountability and inadequate oversight. But due to the sacrifice of the hunger strikers risking their health, that plan was overturned last week.

However, the Bronzeville hunger strikers know what a growing chorus of national education experts recognize: while just keeping schools open is not enough, sustainable “community schools” can help transform neighborhoods. As it is now, Bronzeville is a food and job desert, but Green Technology addresses both problems. There are already 5000 community schools in the US that through civic partnerships address the majority of challenges in a neighborhood by providing wrap-around healthcare, social and psychological services, in addition to the standard educational offerings. Community schools focus on restorative justice practices and a curriculum based in the community and evaluated by teachers, so students can learn more. Community schools are making marked gains in student outcomes both academically and socially.

These are the kind of schools that Bronzeville deserves.

It is under this history of political disinvestment that Bronzeville community leaders arrived to last month’s protests: community members risking their health to fight for their children’s access to something as basic as a good public school. While school officials took the right first step by moving to keep Dyett open, they must heed the deeper call of the people of Bronzeville and invest in a community school that will better the future of the children in Chicago.

Kyle Serrette is the Director of Education Justice Campaigns at the Center for Popular Democracy. Kyle directs CPD’s education strategy. He works with CPD partner organizations and education coalitions to develop strategy and coordinates national and regional campaigns that work to bolster our public education system. Kyle comes to CPD with over 10 years of campaign experience. Kyle has received various awards recognizing his role in organizing and policy victories. Kyle is a graduate of Wesleyan University.