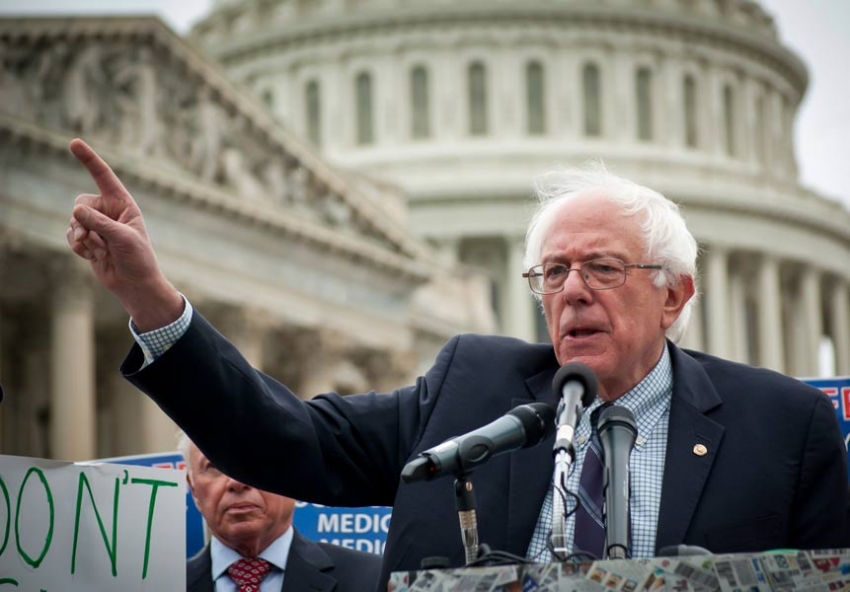 The Wall Street Journal Wants You To Be Afraid of Bernie Sanders’ Budget Proposal. Don’t Be.

If anything, Bernie should be thinking bigger.

The Wall Street Journal, one of the more respectable organs of the Murdoch press, put out a sensationalized tally of Bernie Sanders’ spending proposals yesterday: an $18 trillion agenda that would “greatly expand government.” Sensation is Murdoch house style, but the Journal is also supposed to be a serious paper.

Sanders’ spending proposals, next 10 years (in billions of dollars)

Sounds like a lot, for sure. And that’s the point of these articles: scare people with big numbers, studiously avoiding context.

A couple of quick contextual points. First, the projections cover 10 years, a period when U.S. GDP is expected to total $228 trillion. When you want to make a budget number sound gigantic, always be sure to use the 10-year projections. And always use dollar amounts, because they sound heftier than the more honest measure, percentages of GDP.

Second, over 80% of the total, $15 trillion, comes from a single-payer health care financing system (officially known as HR 676, for its bill number in the House of Representatives). It would undeniably increase federal spending, but that increase would be heavily offset by a decline in spending on private insurance. According to the Congressional Budget Office, the federal government is slated to spend almost $15 trillion on health care between 2016 and 2025—but nonfederal spending will amount to nearly twice as much, $28 trillion. (This estimate is based on CBO numbers as well as the semi-official projections published in Health Affairs.) Single-payer would mostly be a substitute for, not an addition to, all that nonfederal spending (and almost certainly one that would be better at cost control). State and local governments, households and private businesses would see their direct health care spending plummet.

And, while $15 trillion is a gigantic number, it’s 6.6% of projected GDP over the next ten years. Private spending on health care, assuming no major structural changes, is projected to be nearly twice that. With HR 676, it would be lots lower.

After universal health care, the next-biggest item is increasing Social Security benefits and bolstering the system’s finances. That’s the prudent and civilized thing to do, and people should stop whining about it. Besides, Sanders’ proposal amounts to 0.5% of GDP over the ten-year period. That is not a large number—it’s a sixth the size of projected spending on the military. The rest of the agenda amounts to just over $2 trillion, or 1% of GDP. Again, that is not a large number. The college affordability component would, like health care, be a substitute for private spending.

So the price tag for Sanders' vision of a more civilized society is actually quite small. Dream bigger, Bernie!