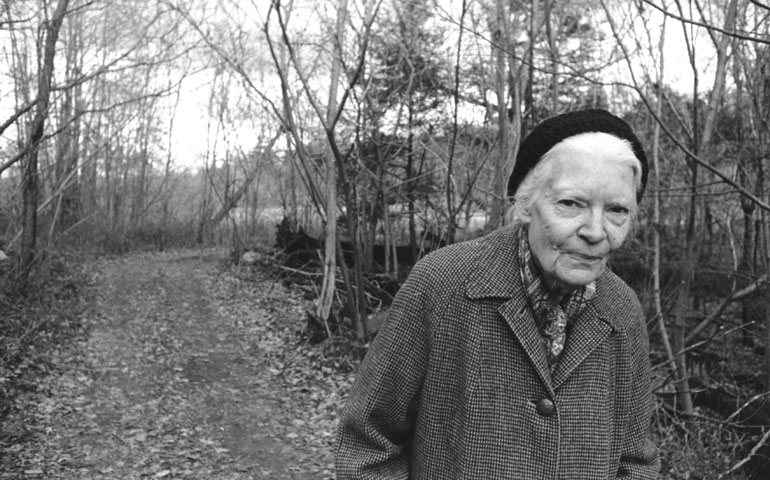 Michael Harrington on the Uniquely Orthodox Radicalism of Dorothy Day

From the In These Times archive: Our 1980 obituary for the radical Catholic leader.

Editor's note: During his address to Congress yesterday, part of his visit to the United States this week, Pope Francis mentioned radical Catholic activist Dorothy Day as a “great American.” Few Americans today know who Day, who died in 1980, was. Here, we reprint an obituary of her by socialist activist and writer Michael Harrington, who briefly lived alongside Day in a Catholic Worker house in New York City, from the December 10, 1980 issue of In These Times.

When Dorothy Day was buried last week, a funeral mass was held at the Church of the Nativity on the Lower East Side, right around the corner from the Catholic Worker House of Hospitality where she lived and died. The procession followed a plain pine coffin down East 3rd Street to 2nd Avenue. Some of the onlookers were winos, the sort of people for whom Dorothy and the Worker had labored for almost half a century, living the Sermon on the Mount in their daily lives. At the church door, the Cardinal Archbishop of New York greeted the mourners—he had offered them St. Patrick’s Cathedral, but was turned down-and then left. That was, I think, an act of sensitivity: this death did not belong to the hierarchy but to the rank and file.

There were some well-known people in the procession—Cesar Chavez, Dave Dellinger, Abbie Hoffman, Jack Egan from Notre Dame—but most were activists. Dorothy, who had been a feminist and socialist before World War I and a member of the Greenwich Village bohemians in the time of Eugene O’Neill and Hart Crane, had converted to Catholicism in the 1920s, and then, on May Day 1933, had started the Catholic Worker to prove, among many other things, that Catholicism could be genuinely radical. The movement flourished in those first years. Out of it emerged the Association of Catholic Trade Unionists, the Catholic interracial movement, the Catholic peace movement and practically every other left tendency in the church.

Dorothy was a pacifist anarchist in the tradition of Kropotkin, Tolstoy and Dante. (A wag once said she believed in the separation of church and no state.) When she opposed Mussolini’s invasion of Ethiopia she lost support among many Italian Americans; when she came out against Franco in the Spanish Civil War, more Catholics were scandalized; and her principled opposition to World War II (which I never shared) isolated her more. But she stuck to her principles with a serene tenacity.

I lived at the Worker in 1951 and ’52. We opposed the Korean War, fought for clemency for the Rosenbergs and defended the civil liberties of Communists in the period of Joe McCarthy. Cardinal Spellman, the cold warrior who headed American Catholicism at the time, could not figure Dorothy out: she was as theologically orthodox as she was politically unorthodox. In the ’50s she led a civil disobedience movement against air-raid drills; in the ’60s she was in the forefront of the struggle against the war in Vietnam; and in her 70s she was arrested as a participant in the United Farm Workers strike.

Perhaps the church will make her a saint. If that happens it will be well to remember that she was an extraordinarily complex and human person, deeply immersed in Dostoevsky and the new French theology, yet much more guided by her emotions than any theory. People, religious or not, console themselves in the presence of death by saying that the person has not “really” died, that the spirit lives on. In the case of Dorothy Day, that is a profound truth, not a pious wish.

Michael Harrington was a founding member of the Democratic Socialists of America and the author of The Other America, among many other books. He died in 1989.