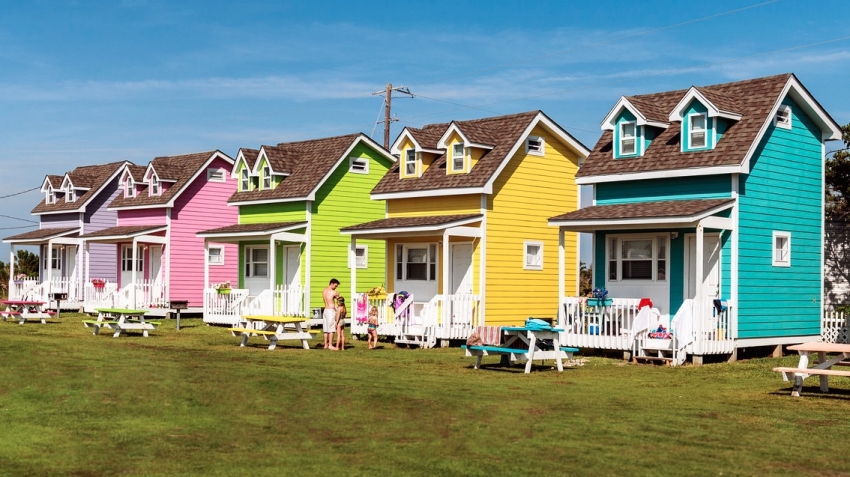 We’d just have to take away subsidies to people who are rich enough not to need them.

One of the main effects of the home mortgage interest tax deduction is to encourage wealthy people to buy bigger houses. In contrast, when you give low-income people housing subsidies, they spend their extra money on things like better food, healthcare and education—which directly improve their quality of life and help bring them out of poverty.

We could extend housing vouchers to every very-low-income household—and expand housing support to the middle class, too—if we were willing to take away just one of the big housing subsidies to people making over $100,000 a year.

I’ve previously made the case that the SNAP program, or food stamps, is a pretty good template for thinking about how to reform the way we do housing assistance. SNAP is available to everyone below a certain income threshold; if you apply and you qualify, you get money to buy food.

Housing is very different. There are a million different housing assistance programs, but all of them are quite limited in scope: if you apply and you qualify, you are simply one of many such people fighting over a much smaller number of vouchers or set-aside affordable units. In some cases, this makes housing assistance more like a lottery game than a social service, as when nearly 2,600 people applied for just 18 homes in San Francisco, 58,000 people applied for 105 homes in New York, or nearly 300,000 people were placed on the waitlist for a Chicago Housing Authority unit. Nationwide, about 20 million people qualify for housing assistance but don’t receive it.

You’ll be waiting a long time for a public housing unit at this mixed-income development in Chicago. Credit: Google Maps

But how much would food-stampifying housing policy cost? Surely an unreasonable, pie-in-the-sky amount, right?

Well, fortunately for us, the Congressional Budget Office has already done the legwork to figure it out. In a study published in September, the CBO gamed out a large number of possible directions to take housing policy: bigger, smaller, budget-neutral tweaks, transfers from one program to another and so on.

One of the options it analyzed was expanding the Housing Choice Voucher (also known as Section 8) program to everyone who qualifies—which, at the moment, is anyone whose income is below 50 percent of “AMI,” or the median income in their area. (In most metro areas, that puts the upper limit for a family of four at between $25,000 and $35,000). The CBO estimated such a policy would cost about $41 billion a year over the next ten years. A more modest approach, targeted to only the extremely low-income—those making less than 30 percent of their area’s median income—would cost about $29 billion a year.

That’s nothing to sneeze at. We already spend about $18 billion a year on Housing Choice Vouchers, so all told, an everyone-who-qualifies voucher program would cost $59 billion a year over the next ten years.

But it turns out there’s another housing program that’s already much bigger than that: the home mortgage interest tax deduction, which cost taxpayers $68 billion in 2014.

What do we get for the mortgage interest tax deduction? Not much, according to the best research available.

The goal of the deduction, ostensibly, is to promote homeownership. Whether or not that’s a good idea in itself—and that is not a settled question—the fact is that the mortgage interest deduction isn’t actually effective at promoting homeownership. Why not? A big reason is that the vast majority of its expenditures go to high-income households: after all, you only get it if you itemize your deductions, and you get more money for having a more expensive house. That means most of the money is going to people who would have plenty of resources to buy a home without the deduction. Instead, the evidence seems to suggest that one of the main effects of the deduction is to encourage wealthy people to buy bigger houses.

In contrast, when you give low-income people housing subsidies, they spend their extra money on things like better food, healthcare and education—which directly improve their quality of life and help bring them out of poverty.

As of 2012, 77 percent of the money we spent on the mortgage interest deduction went to households making over $100,000 a year, an income that would make you richer than four out of five Americans. It also happens that 77 percent of $68 billion, the total value of the mortgage interest tax deduction, is about $52 billion: in other words, enough to give a housing voucher to every single household that needed it, with about $10 billion to spare.

Such a surplus would even allow the federal government to increase the value of the mortgage interest tax deduction for people making under $100,000 a year—people for whom extra cash is much more likely to be the difference between buying a home and not. In fact, redirecting all the money left over after giving all qualifying households vouchers would allow us to increase the value of the mortgage interest deduction for people making less than $100,000 by more than 60 percent. (I'm far from the only person thinking about reforming the mortgage interest deduction, by the way. Representative Keith Ellison of Minnesota has submitted a bill that would convert the deduction into a 15 percent tax credit, available to people who don’t itemize their deductions, and reduce the maximum amount of home value that can be deducted from $1 million to $500,000. His bill would not redirect any money to Housing Choice Vouchers, however.)

Making this work for the broad majority of middle-class homeowners is also important, because the mortgage interest tax deduction is a very popular policy: as much as 90 percent of the electorate supports continuing it. Whether or not it’s the best use of housing policy dollars, getting rid of the deduction entirely is a nonstarter.

But why should it be impossible to give up housing subsidies for the richest fifth of the country in exchange for more homeownership support for the middle class and a guarantee of housing support for all very-low-income people?

Now, importantly, this would not mean the end of our housing problems. In many places, housing vouchers are only moderately useful in combating racial and economic segregation, both because landlords are able (legally or illegally) to discriminate against voucher holders, and because they won’t cover rents in extremely high-cost neighborhoods. Segregation would continue to put low-income people and people of color at disadvantages in terms of access to public resources and economic mobility.

And in places with extreme housing shortages, prices have surpassed what even moderate-income and middle-class households can afford. While voucher eligibility cuts off at 50 percent of “area median income,” San Francisco recently announced it was building housing for people at 150 percent of AMI, or over $150,000 a year; Bill de Blasio’s big affordable housing program in New York City contains a large number of set-aside units for people making 120 percent of AMI, or about $90,000 a year there.

In these places—and similarly exclusionary neighborhoods and suburbs across the country—the need to pay for housing subsidies to the poor, the working class, and the middle and upper-middle class overwhelms any realistic funding source. More construction is needed to get prices down to a point where subsidies to lower-income people are sufficient, and middle-income households are able to afford housing largely on their own.

But despite these shortcomings, it’s hard to overstate just what a revolution in housing policy entitlement vouchers would be. Affordable housing is a national challenge, but in recent years, it has largely been up to local governments to tinker around the edges of overwhelming need—and even the most ambitious local governments simply don’t have the resources to do much more than tinker around the edges.

San Francisco’s massive Proposition A, which voters approved in November, will bond $310 million for affordable housing—its own proponents decided their initial goal, $500 million, would strain the ability of the city to service the debt—which will likely result in less than 1,000a thousand net new units of affordable housing. In Chicago, the signature affordable housing policy of the last few years is supposed to create just 1,000 units of affordable housing, even as 300,000 people are on the waitlist for a public unit. In Austin, a community land trust was able to make national news while creating three affordable homes, with 25 more in the pipeline.

Local efforts to to provide housing relief to those who need it are necessary and important. But only the federal government has the resources to address the full scale of the issue. In fact, there is already at least one federal housing program that could be scaled up to take a massive bite out of the housing problem, relieving one of the most terrifying and dangerous consequences of poverty. We could pay for it simply by deciding that households that make more than $100,000, people whose income is above 80 percent of the country’s, don’t need housing subsidies. What kind of government turns down that deal?