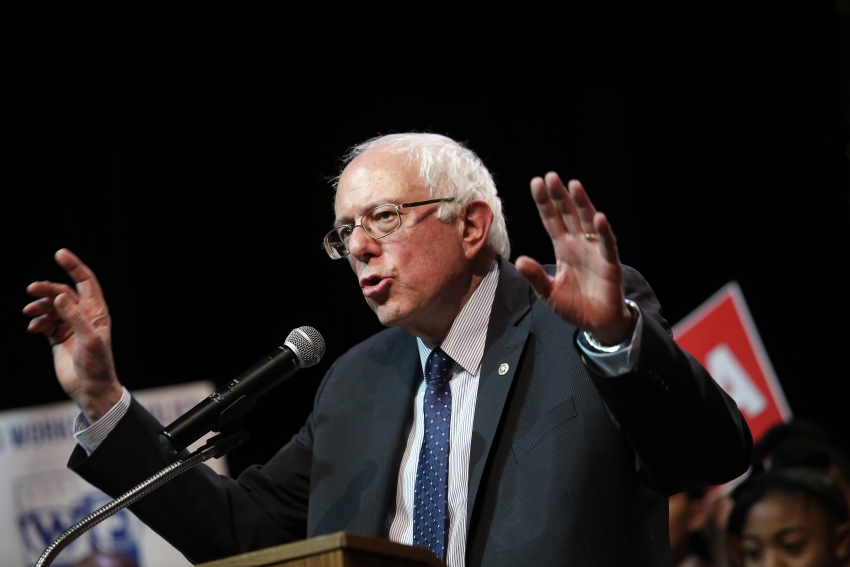 Sanders has told the Obama administration, "I urge you to immediately cease these raids and not deport families back to countries where a death sentence awaits.” (Photo by Joshua Lott/Getty Images)

Sanders claims the Obama administration’s raids of Central American families and children are inconsistent with American values—and must be stopped. Hillary Clinton’s past support of such deportations sets her apart.

The fact that the U.S. government is now forcing these families who survived the horrendous journey and settled in America to deport back to the same horrific conditions which led them to flee their home countries has immigration activists up in arms.

This past November, with dozens of Republican governors calling for Syrian refugees to be denied entry into the Unites States, President Obama stood firmly in defense of admitting those fleeing violence and the terrors of war. During a speech at the G20 economic summit in Antalya, Turkey on Nov. 16, he said: “Slamming the door in their faces would be a betrayal of our values.”

Yet this month, the Obama administration launched a devastating sweep of large-scale raids of Central American migrants in the United Sates, aimed at rounding-up and deporting families and unaccompanied children who crossed the border seeking refuge from violence and terrors in their own home countries.

This policy has been defended by Department of Homeland Security Secretary Jeh Johnson who stated that “individuals who constitute enforcement priorities, including families and unaccompanied children, will be removed.” And it has gained the smug approval of Republican presidential candidate and known-bigot Donald Trump, who tweeted, “Does everyone see that the Democrats and President Obama are now, because of me, starting to deport people who are here illegally. Politics!”

But another presidential candidate has now officially called for the Obama administration to end these deportation raids of Central American migrants and “defend vulnerable immigrant families”: Bernie Sanders.

In a letter sent today from Sanders to Secretary Johnson, the Democratic candidate states unequivocally that, “Raids are not the answer. We cannot continue to employ inhumane tactics involving rounding up and deporting tens of thousands of immigrant families to address a crisis that requires compassion and humane solutions.”

Sanders claims that rather than deporting these families, the administration should seek to provide them protection and employment within the United States. A statement from his campaign explains:

“Citing the extreme violence that these families face, Sanders urged the administration to use executive authority to protect those fleeing unsafe countries in Central America by extending Temporary Protected Status. By granting Temporary Protected Status, the Department of Homeland Security could provide employment authorization and protection from deportation for a significant portion of these vulnerable people.”

Democratic presidential candidate Martin O’Malley has also called for the United States to extend temporary protective status to these migrants, claiming that the raids “are not consistent with who we are as a country. We must stop ripping families apart and once and for all put an end to these mindless deportations.”

Hillary Clinton’s campaign is not currently calling for an end to the policy, though her spokesperson Jorge Silva has voiced opposition to “large-scale raids and roundups.” Her campaign has stated that the candidate has “real concerns about these reports.”

The Washington Office on Latin America has called the plight facing Central American migrants “one of the most severe humanitarian crises in the Western Hemisphere”.

Many of those currently facing deportation entered the United States as part of the “surge” of Central American migrants during the summer of 2014. As Joseph Sorrentino reported for In These Times in June, the tens of thousands of families fleeing dire poverty and violence in Honduras, Nicaragua and other Central American countries face routine rape, assault, extortion, abduction and murder as they cross Mexico to reach the United States. And, as the New York Times confirmed, the Obama administration has given the Mexican government tens of millions of dollars to make sure that these migrants are not allowed to make it to the American border.

The fact that the U.S. government is now forcing these families who survived the horrendous journey and settled in America to deport back to the same horrific conditions which caused them to flee their home countries has immigration activists up in arms.

Frank Sharry, a leading advocate for immigration reform with America’s Voice, tells the Atlantic, “I think the administration’s approach is fundamentally flawed. They are treating a refugee crisis as an immigration enforcement issue.”

A letter to Secretary Johnson signed by more than 100 immigrant advocacy groups across the country claims that “a very high proportion of the Central American mothers and children now targeted for ICE raids have survived sexual assault or other forms of extreme violence and have mourned the loss of close family members to particularized violence.” The letter continues, claiming: “Mothers and children who witnessed and survived arrest, torture, and murder of family members, and attempts on their own lives, will be grossly re-traumatized by ICE raids.”

Already, the nation's highest immigration court has announced that it will temporarily halt the deportations of 12 Central American women and children following claims that raids were carried out in the night without ICE agents properly presenting warrants or allowing legal counsel. Yet the Obama administration plans to carry on with the controversial policy.

President Obama has gained a reputation as “deporter-in-chief” for his record of having deported more immigrants than any other president in U.S. history. As his second and final term nears a close, these mass raids may serve to cement his legacy as a president who chose deportation over compassion to guide American immigration policy.

But 2017 will see a new occupant of the White House. And two of the Democrats vying for the position—Bernie Sanders and Martin O’Malley—have now made clear that they believe this policy of raiding and deporting those fleeing violence is unjust and inhumane—and should be ended. The Hispanic vote will be crucial in the upcoming election, and while Clinton still remains the front-runner, her previous statements that deporting Central American migrant children would send a “responsible message” to deter families from sending them to the United States may come back to haunt her this primary season.