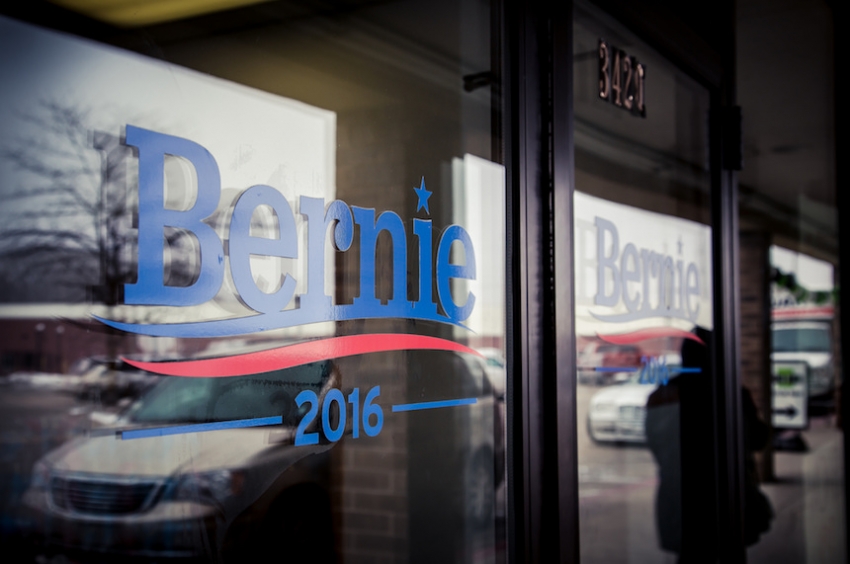 In recent weeks, major liberal pundits are putting in overtime to freshen their case against Bernie Sanders, urging citizen’s to ignore their conscience and quit screwing with the interests of the moneyed elite.

[T]hese cases against Sanders are really arguments against citizens voting their conscience. The uncertainty and dismissiveness toward Sanders serves to silence any critics of the corporate-driven politics entrenched in the Democratic Party. It suggests a fear that Democrats might actually stand against corporate power for a change.

The objective of the week for liberals appears to be to make clear Democratic presidential candidate Bernie Sanders is some kind of pariah. Despite how his candidacy has transformed into a phenomenon over the past months, establishment liberals maintain the U.S. senator from Vermont should not be considered a “serious” candidate. They believe it would be a huge mistake if a Democrat with unapologetic socialist leanings won the nomination, especially over Hillary Clinton.

But these cases against Sanders are really arguments against citizens voting their conscience. The uncertainty and dismissiveness toward Sanders serves to silence any critics of the corporate-driven politics entrenched in the Democratic Party. It suggests a fear that Democrats might actually stand against corporate power for a change.

The New York Times reports “alarmed Hillary Clinton supporters” are warning Sanders “would be an electoral disaster who would frighten swing voters and send Democrats in tight congressional and governor’s races to defeat.” Supporters cast Sanders as “unelectable” and attempt to present him as the Republicans’ favored nominee because super political action committees run by operatives like Karl Rove would supposedly prefer to see the Republican nominee run against Sanders.

Liberal columnist Jonathan Chait published what is being touted as the definitive case against Sanders. Another liberal columnist, Michael Cohen, penned a shrill op-ed for The Boston Globe, entitled “Bernie Sanders doesn’t know how politics work.” Vox’s Matt Yglesias urged Democratic voters to take Sanders “seriously,” by which he means it is time to recognize all Sanders has to offer America is “half-baked” plans and populist slogans.

This rhetoric fits a playbook the American liberal class has followed for the past decades. As writer Chris Hedges argued, “The liberal class’ disposal of its most independent and courageous members has long been part of its pathology.” After World War I, and especially after World War II, corporations gradually sought more and more control of the state. Corporations now hold government completely captive and the liberal class, which “purged itself of the only members who had the fortitude and vision to save it from irrelevance,” bears some responsibility.

Those in power expect liberals to police others on the left who would threaten their supremacy. So, when a political elite such as Clinton is faced with a formidable opponent, liberal pundits wittingly or unwittingly devise arguments for why Americans should vote against their interests and support someone who would likely manage government in a manner suitable for the corporate state.

Chait has had off-the-record meetings with President Barack Obama, where he gets to flatter himself with the fact that a president trusts him to represent his views in columns written for Americans. So, let’s focus on deconstructing some of Chait’s arguments against Sanders.

The White House’s favored pundit confesses he does not support Sanders’ policy vision, but even if he did, it would be an “unusually poor time” to make this policy vision the “centerpiece of a presidential campaign.” Democrats, who support Sanders, “risk losing the presidency by embracing a politically radical doctrine that stands zero chance of enactment even if they win.”

Back in October, Chait called Clinton the “all-but-certain Democratic nominee,” and he is panicking because his certainty was wrong. How Chait can claim to know what stands “zero chance of enactment” when he so misjudged the potential of Sanders’ campaign is flabbergasting. But the argument, which most deserves to be challenged, is the notion that Sanders imperils Democrats’ chances in the 2016 election at each level of government because politicians will have to defend his socialist leanings.

Citizens are not managers of democracy. They do not need to concern themselves with political strategy and cynical concepts like “electability.” To the extent that voting actually matters, a citizen’s job should be to vote their conscience. After voting, citizens should participate or return to direct actions and grassroots organizing, which can grow movements that provide the momentum to make enacting policies Sanders supports possible.

Chait refuses to contemplate the role grassroots organizations might play during a Sanders presidency. He does, however, acknowledge Sanders has mobilized a “mass grassroots volunteer army.” Yet, Chait maintains Obama organized volunteers on a larger scale than Sanders, “tried to keep his volunteers engaged throughout his presidency, and that “failed,” which is not true.

Once Obama was elected in 2008, as Rolling Stone’s Tim Dickinson reported, “Obama’s grass-roots network effectively went dark for two months after Election Day, failing to engage activists eager for their new marching orders.” David Plouffe, Obama’s former campaign manager, took the network and made it a part of the Democratic National Committee.

“The move meant that the machinery of an insurgent candidate, one who had vowed to upend the Washington establishment, would now become part of that establishment, subject to the entrenched, partisan interests of the Democratic Party. It made about as much sense as moving Greenpeace into the headquarters of ExxonMobil,” according to Dickinson.

What about the idea that Sanders poses an “enormous obstacle” because Americans respond to “socialism” with “overwhelming negativity”?

Such an argument rests upon a legacy of red-baiting and hysteria toward all things labeled socialist or left-wing. The negativity would not necessarily be impervious to the proposals of Sanders if he was the nominee and the news media had no choice but to constantly cover and discuss his socialist-leaning plans.

Most Americans think the wealthy pay “too little in federal taxes” and back a tax hike. A majority supports a single-payer healthcare option. Citizens want programs like Social Security expanded, not cut. Half of Americans support government funding of federal campaigns to address the problem of corporate and special interest influence in elections.

What Chait’s argument really amounts to is an argument that Democratic Party politicians and the operatives who run their campaigns would be uncomfortable with talking openly about socialism because that would alienate the corporate interests they have cozied up to in order to win elections.

To demonstrate this is the case, read this glorious excerpt from the Times about how petrified the Democratic National Committee is by Sanders:

House Democrats got a taste of those challenges last fall. As many of their candidates met in Washington with consultants, donors and reporters, word leaked that Mr. Sanders was to give a speech explaining what it means to be a democratic socialist. “We had candidates and consultants calling us, emailing us, saying: ‘What do we say about this? How do we explain this?’” recalled a House Democratic official, who requested anonymity because he was not authorized to intervene in the presidential race.

Another question asked the difference between a Democrat and a socialist. Candidates were urged to express pride in being a Democrat but also belief in capitalism and small businesses, “the engine of our economy.”

Democrats, along with President Obama’s administration, have spent the last eight years protecting capitalism from populist calls for reform, which would diminish the power and influence of corporations. The Affordable Health Care Act was a prime example, where Medicare for All was immediately taken off the table, and the political party manipulated citizens into believing requiring private insurance companies to offer insurance to all consumers was the best that could be accomplished.

It is one thing to vote for Hillary Clinton and other Democrats, who are more than happy to serve the moneyed elite, if you actually believe in what she stands for as a presidential candidate. But it is quite another thing to delude people into voting for her simply because it is your view that Bernie Sanders’ vision is difficult to make a reality. That position accepts the status quo and embraces a politics of low expectations, where the best elected officials can do is triage the effect of wealth and power becoming more and more concentrated in the hands of the few.

Kevin Gosztola is managing editor of Shadowproof Press. He also produces and co-hosts the weekly podcast, Unauthorized Disclosure. Follow him on Twitter: @kgosztola