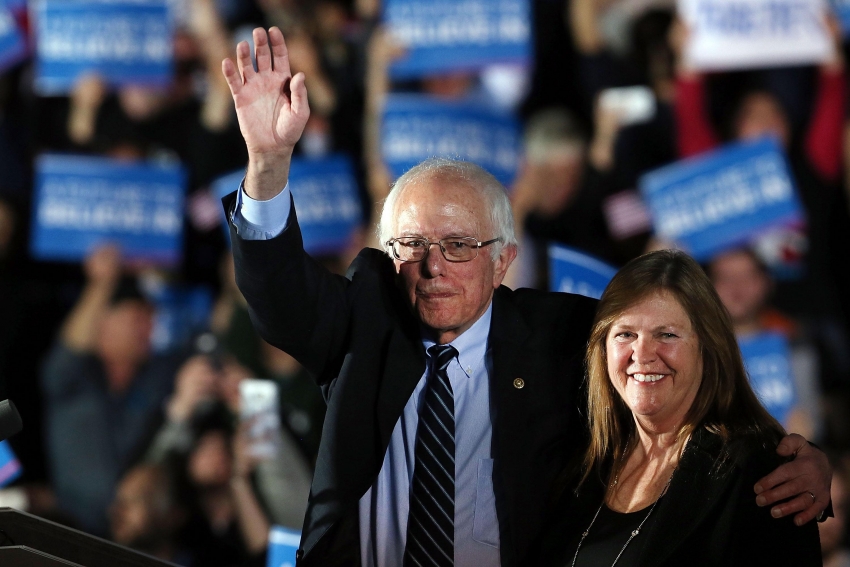 The More Bernie Sanders Wins, the More Establishment Liberals Will Tell You He Can’t Win

Always in a tone of cool neutrality, a “just the facts, ma’am” report from reality. Which seems to mask a deeper attachment to the reality it purports to describe.

The blast that swept him came off New Hampshire snow-fields and ice-hung forests. It seemed to have traversed interminable leagues of frozen silence, filling them with the same cold roar and sharpening its edge against the same bitter black-and-white landscape.

Some fascinating tidbits about the Democratic primary voters from the New York Times exit poll:

The best comment of the evening, though, goes to my CUNY colleague David Jones, who is providing commentary to the New York Times:

Even so, there were a few silver linings for Mrs. Clinton. . . . And, though Mrs. Clinton lost nearly every income group, she did carry voters in families earning over $200,000 per year.

Or maybe it does. Politico reports that after her stunning loss, Clinton’s campaign is getting a facelift:

Now, after a drubbing so serious as to call into question every aspect of her campaign from her data operation to her message, the wounded front-runner and her allies are actively preparing to retool their campaign, according to Clinton allies.

Staffing and strategy will be reassessed. The message, which so spectacularly failed in New Hampshire where she was trailing by 21 points when she appeared before her supporters to concede to Sanders, is also going to be reworked — with race at the center of it.

Clinton is set to campaign with the mothers of Trayvon Martin and Eric Garner, unarmed African-Americans who died in incidents involving law enforcement officers and a neighborhood watch representative, respectively. And the campaign, sources said, is expected to push a new focus on systematic racism, criminal justice reform, voting rights and gun violence that will mitigate concerns about her lack of an inspirational message.

Hillary strongly supported this legislation [Clinton’s crime bill] and stood resolutely behind her husband’s punishment campaign. “We need more police, we need more and tougher prison sentences for repeat offenders,” Hillary declared in 1994. “The ‘three strikes and you’re out’ for violent offenders has to be part of the plan. We need more prisons to keep violent offenders for as long as it takes to keep them off the streets,” she added. Elsewhere, she remarked, “We will finally be able to say, loudly and clearly, that for repeat, violent, criminal offenders: three strikes and you’re out.”

It’s one thing to walk back your policies on race and crime because the electoral winds are blowing in the other direction. But to pivot so shamelessly from one campaign in which you made war on black America your signature issue to another in which you make fighting racism your campaign brand—simply because you’re losing in the primaries (anyone who thinks Clinton would be retooling her campaign like this needs to read the piece I linked to above)—is, well, a little breathtaking.

The more Sanders wins, the more the liberals will tell you he can’t win. Always in a tone of cool neutrality, a “just the facts, ma’am” report from reality. Which seems to mask a deeper attachment to the reality it purports to describe. It reminds me of how Lincoln characterized Stephen Douglas’s embrace of popular sovereignty: “This declared indifference, but as I must think, covert real zeal for the spread of slavery.”

In These Times is proud to feature content from Jacobin, a print quarterly that offers socialist perspectives on politics and economics. Support Jacobin and buy a subscription for just $19.

Corey Robin is a professor of political science at Brooklyn College and the CUNY Graduate Center. He is the author of The Reactionary Mind: Conservatism from Edmund Burke to Sarah Palin and Fear: The History of a Political Idea.