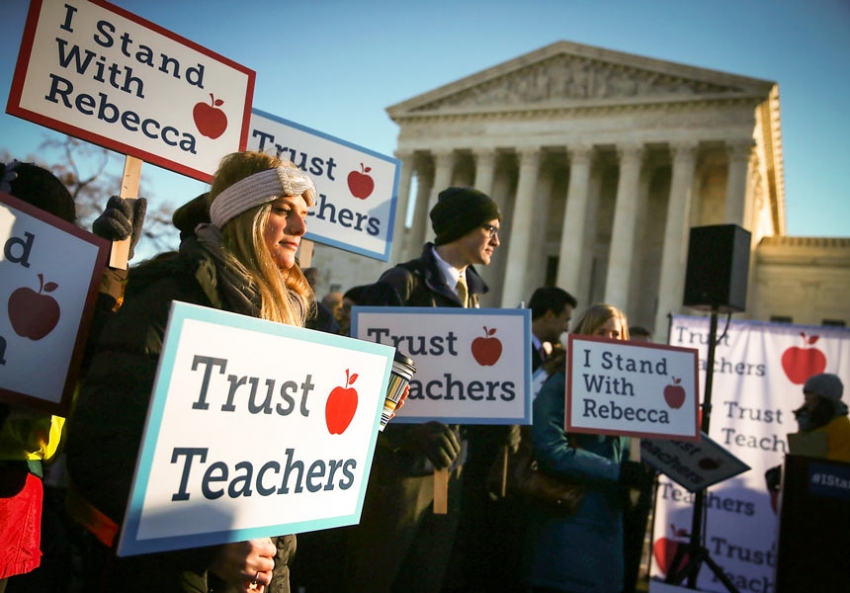 The Racist Agenda Behind the Now-Dead ‘Friedrichs’ Supreme Court Case

A negative ruling would have led to a closing of the on-ramp to the middle class for women and people of color.

If the case’s plaintiffs win, our economy, already tilted sharply in favor of the super-rich, will become even more imbalanced.

The Supreme Court has voted 4-4 on Friedrichs v. California Teachers Association, and thus the case is—for now, at least—dead. We should all breathe a sigh of relief: Friedrichs would have made it harder for public service workers—nurses, teachers, firefighters and more—to negotiate good wages and benefits. The two groups that will lose the most are women and African Americans.

If the case’s plaintiffs would have won, our economy, already tilted sharply in favor of the super-rich, would have become even more imbalanced. Public sector workers would have received all of the benefits of union membership without having to pay anything for the cost of representation that unions are required to provide by law. “Right to work” would have become the law of the land in the public sector.

Behind Rebecca Friedrichs, the teacher from California who was one of 10 plaintiffs in the case, is the Center for Individual Rights (CIR), which actively sought out potential plaintiffs to bring suit against the teachers union—just as it aggressively recruited white students on college campuses to bring anti-affirmative action lawsuits against their universities, most notably in Hopwood v. Texas and Gratz v. Bollinger. CIR is also on record in opposition to hate-crime legislation, voting rights and the Affordable Care Act—while championing the cause of payday lenders, which prey on poor communities and communities of color around the country.

CIR has received funding from the Pioneer Fund, a foundation classified by the Southern Poverty Law Center as a hate group that funds and studies eugenics, the racist “science” of breeding superior human beings. The foundation also supports anti-immigration groups that share its hate-group classification.

The Right has successfully whittled down private-sector union membership to 6.7 percent by pushing state right-to-work laws, supporting bad trade deals that ship jobs offshore and using highly paid corporate union-busters to stymie workers’ organizing. While private-sector union density is less than half what it was in 1983, public-sector density has remained steadily above 35 percent—more than five times the private sector.

It comes as no surprise that CIR and other right-wing organizations have the public sector in their crosshairs, as the public-sector unions have long provided a pathway to the middle class for women and people of color.

The public sector’s anti-discrimination policies have opened doors for African Americans and women when private industry’s doors were not just closed, but locked. Women make up over half (55 percent) of government workers and public-sector union members. Female public sector union members earn 24 percent ($192 per week) more and have half the gender wage gap of non-union female public-sector workers. On top of that, they’re more likely to have employer-sponsored health insurance, retirement security, paid leave and other benefits.

The wage gap between white and African-American workers shrinks considerably in the public sector, with African Americans in the public sector earning 2.2 percent less than their white counterparts, compared to 12.9 percent in the private sector. And African Americans in public-sector jobs also earn more than African-American workers in private-sector jobs: Black men earn 23.6 percent more, and black women earn 25.4 percent more than their counterparts.

Many of these economic gains and benefits are the result of protracted, collective fights. The Memphis sanitation workers’ 1968 strike, the San Jose municipal workers’ 1981 strike for equal pay and the 2011 fight to preserve collective bargaining in Ohio are just a few successful examples. The dramatic public-sector job losses during the last recession (Gov. Scott Walker’s Act 10 in Wisconsin), and the continued attacks on workers’ hard-earned pensions and pay (across the country), show these struggles will go on.

The public sector continues to be an on-ramp to the middle class for women and people of color. Thanks to the split Supreme Court ruling on Friedrichs, that on-ramp is still open.

Naomi Walker is the assistant to the president of the American Federation of State, County and Municipal Employees, writes the “9 to 5” column for In These Times.