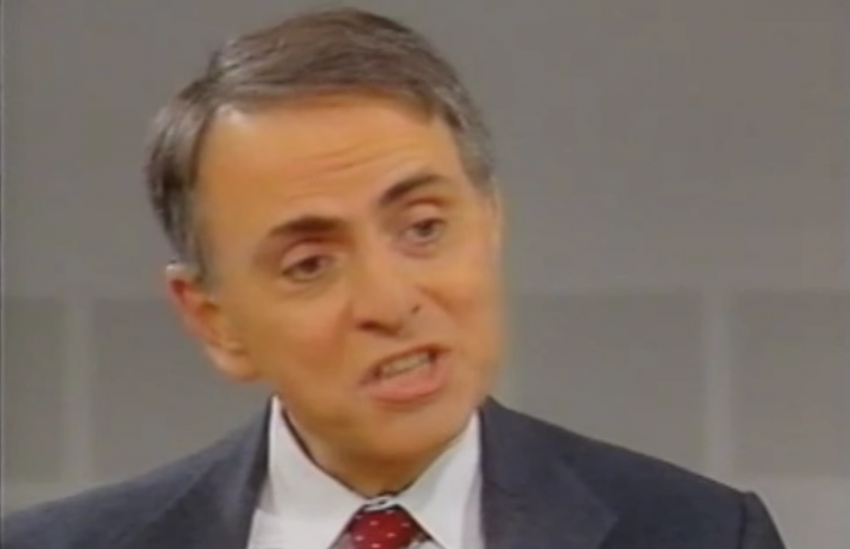 When Asked Whether He Was A Socialist in 1989, Carl Sagan Sounded a Lot Like Bernie Sanders in 2016

Carl Sagan is best known for bringing attention to the cosmos. But in this clip from CNN, he puts the spotlight on how the Unites States fails to take care of its own most vulnerable citizens.

Bernie Sanders isn’t the only high-profile, outspoken, Brooklyn-born, University of Chicago graduate to be questioned on cable news about whether he identifies as a socialist.

In this 1989 clip from CNN, celebrated astrophysicist and American icon Carl Sagan was also asked, by Ted Turner, whether he was a socialist. And his response is strikingly similar to that given today by Sanders.

Sagan, who was politically active throughout the 1980s as an opponent of the nuclear arms race and Ronald Regan’s Strategic Defense Initiative, argues that the United States is unique from other wealthy countries in its unwillingness to care for, and invest in, its own citizens. “The United States is perfectly able to do that,” he says. “It chooses not to.”

Unlike Sanders, Sagan did not necessarily agree to be labeled a socialist. He did, however, point out startling realities, like the United States’ ranking in infant-mortality rate (19th in 1989), to reveal the unbalanced priorities of a government that was spending vast amounts of money in a Cold War with the Soviet Union.

In Sagan’s own words:

“Eighteen other countries save the lives of their babies better than we do. How come? They just spend more money on it. They care about their babies more than we care about ours. I think it’s a disgrace…This country has great wealth…We are using money for the wrong stuff.”

Sanders echoes this sentiment when he argues for investing in policies like free tuition at public universities, universal health-care and decreasing the defense budget.

Back in 1989, Turner, who awkwardly rubbed his hands together during Sagan’s response, didn’t skip a beat in rerouting the conversation towards a topic the public was perhaps more comfortable hearing about from Sagan: time-travel.

At least today in 2016, Sanders is asked actual follow-up questions by our talk-show hosts and political pundits—allowing for real debate and helping to give the term ‘socialism’ its fair due in the public arena.